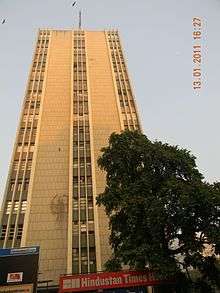 Hindustan Times is an Indian English-language daily newspaper founded in 1924 with roots in the Indian independence movement of the period ("Hindustan" being a historical name for India).[3] The newspaper is owned by Rajya Sabha M.P. Shobhana Bhartia.[4][5] It is the flagship publication of HT Media. Hindustan Times is one of the largest newspapers in India, by circulation. According to the Audit Bureau of Circulations, it has a circulation of 1.16 million copies as of November 2015.[2] The Indian Readership Survey 2014 revealed that HT is the second most widely read English newspaper in India after The Times of India.[6] It is popular in North India, with simultaneous editions from New Delhi, Mumbai, Kolkata, Lucknow, Patna, Ranchi, Bhopal, and Chandigarh.

Hindustan Times was founded in 1924 by Sunder Singh Lyallpuri, founder-father of the Akali movement and the Shiromani Akali Dal in Punjab Province.[8] S Mangal Singh Gill (Tesildar) and S. Chanchal Singh (Jandiala, Jalandhar) were made in charge of the newspaper. Madan Mohan Malaviya and Tara Singh were among the members of the Managing Committee. The Managing Chairman and Chief Patron was Master Sunder Singh Lyallpuri.

K. M. Panikkar also known as Sadar Panikkar launched the Hindustan Times as a serious nationalist newspaper. As an Oxonian, historian, and litterateur, Panikkar must have hoped to make his paper eventually more than an Akali sheet. He became the editor and funds flowed freely from activist Akali patrons. He exerted himself strenuously, but the paper made very little headway. In two years Panikkar could not take the print order any higher than 3,000. By then the Akali movement appeared to lose steam and funds dried up. The paper was saved from an untimely demise when Pandit Madan Mohan Malaviya stepped in to realise his vision of a newspaper in Delhi.[10]

Malaviya raised ₹50,000 rupees to acquire the Hindustan Times along with the help of nationalist leaders Lajpat Rai and M. R. Jayakar and industrialist G. D. Birla, who paid most of the cash. Birla took full control of the paper in 1933. The paper continues to be owned by the Birla family.

It has its roots in the Indian independence movement of the first half of the twentieth century and even faced the noted "Hindustan Times Contempt Case (August–November, 1941)" at Allahabad High Court.[11] It was edited at times by many important people in India, including Devdas Gandhi, Sri Mulgaonkar, B.G.Verghese and Khushwant Singh. Sanjoy Narayan was editor in chief of the paper from August 2008 till July 2016.[12] Recently the editorial page has seen a major makeover and has been named "comment" to bring in more flexibility and somewhat less seriousness to the page.

HT Mumbai has an eight-page daily lifestyle supplement (in broadsheet format) called HT Cafe. It has its education supplement called "HT Education" on Wednesdays. The paper also comes with a magazine on Sundays called Brunch. The Mumbai edition is managed by Mohit Ahuja, an alumnus of NMIMS, Bombay. The resident editor in Mumbai is Soumya Bhattacharya.

The Delhi-based English daily Hindustan Times is part of the KK Birla group and managed by Shobhana Bhartia, Rajya Sabha member of Congress party and daughter of the industrialist Krishna Kumar Birla and granddaughter of Ghanshyam Das Birla. HT Media is a subsidiary company of Hindustan Times. The KK Birla group owns a 69 percent stake in HT Media, currently valued at ₹834 crore. When Shobhana Bhartia joined Hindustan Times in 1986, she was the first woman chief executive of a national newspaper. Shobhana has been nominated as a Rajya Sabha MP from Congress Party.