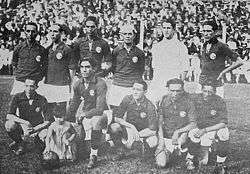 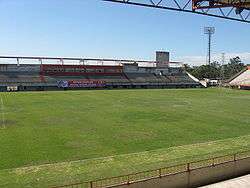 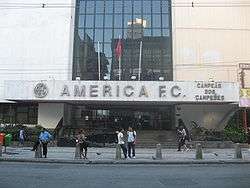 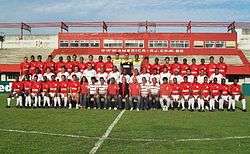 Team photo from the 2009 season 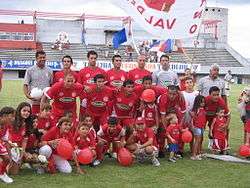 Team photo from the 2008 season

America Football Club, or America as it is usually called, is a Brazilian football club from Rio de Janeiro in Rio de Janeiro state, which was founded on September 18, 1904. The club competed in the Campeonato Brasileiro Série A several times, winning the state championship seven times. The club's home stadium is the Estádio Giulite Coutinho, which has a capacity of 16,000. They play in red shirts, white shorts and red socks.

For the 1971 season, the club competed in the national Championship's first edition, finishing in 11th place.[5]

The yellow star just above their emblem represents their win in the Tournament of the Champions (Torneio dos Campeões) in 1982, which was a tournament organized by CBF to serve as a preview to the Campeonato Brasileiro Série A tournament. Flamengo declined the invitation so America, the team with the best record after the selected teams, was invited to fill the spot. America won the tournament by beating Guarani in overtime at Maracanã stadium.[6]

In 2006, America was the runner-up of Taça Guanabara. America played the final against Botafogo.[7]

According to the CBF register.

One controversial aspect of the club is the official mascot: the Diabo (devil), depicted as a red demon complete with horns, pointy beard, curled moustache, a long fat arrow-pointed tail, hooved feet and a black cape. The club's old stadium was nicknamed Caldeirão do Diabo ("Devil's Cauldron"). In 2006 some of the club's fans, supported by then-manager Jorginho who is an Evangelical Christian, attempted to replace the diabo with a bald eagle, claiming that the devil was "unlucky". However, as the "diabo" is a traditional part of the club's story and with the original mascot the club conquered its greatest achievements and there was no change in the club's fortunes with the new mascot, the replacement was abandoned and it was considered that Jorginho's opinion was motivated by religious fanaticism.[10]

America is the Brazilian club with the largest number of other clubs named after it, who copy even its symbols. Some of its clones include: América of Natal, América of São José do Rio Preto, América of Três Rios, América of Amazonas, América Futebol Clube (Teófilo Otoni), América of Ceará.[11]