Fluminense Football Club (Brazilian Portuguese: [flumiˈnẽsi ˈfu̇t-ˌbȯl ˈkləb]), known simply as Fluminense, is a Brazilian sports club best known for its football team that plays in the Campeonato Brasileiro Série A[nb 1], the top tier of Brazilian football and the Campeonato Carioca,[nb 2] the state league of Rio de Janeiro. The club is based in the Laranjeiras neighbourhood of Rio de Janeiro. Fluminense play their home games at the Maracanã Stadium, which currently holds up to 78,838 spectators.

The club was founded on July 21, 1902 by the sons of Carioca aristocrats, being led by Oscar Cox, a Brazilian sportsman, in the bairro of Flamengo, a direct contrast between the aristocratic founders and the modest ground it was founded on. Cox was elected as the club's first president. Fluminense has been state champions on 31 occasions, second only to Flamengo with 33. The team has been national champions four times, most recently in 2012, and won the Copa do Brasil in 2007.

Fluminense is a demonym for people who reside in the State of Rio de Janeiro. Although football is the club's original endeavor, the club is today an umbrella organization for several teams in more than 16 different sport activities. Fluminense's home kit is dark red-and-green vertical striped shirts, with white shorts, accompanied by white socks; this combination has been used since 1920. Dryworld are the kit manufacturers. Fluminense holds many long-standing rivalries, most notably against Flamengo (Fla-Flu), as well as with Botafogo and Vasco da Gama. It has contributed the fifth-most players to Brazil's national football team. 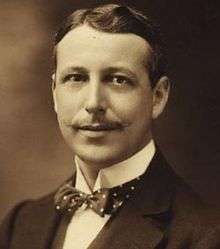 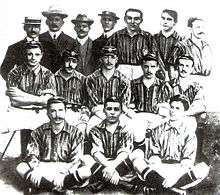 The team that won its first Campeonato Carioca, in 1906. 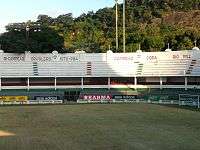 The Fluminense team in 1908, posing with the trophies won.

Fluminense Football Club was founded on July 21, 1902 in Rio de Janeiro by Oscar Cox, a Brazilian of English heritage,[1] in the then aristocratic neighborhood of Laranjeiras.[2] Fluminense was formed by sons of the elite who had come into contact with football while studying in Europe.[3]

The first official match was played against now defunct Rio FC, and ended 8–0 to Fluminense.[1] The club's first title came in 1906, when Fluminense won the Campeonato Carioca.[1]

In 1911, disagreement between Fluminense players led to the formation of Flamengo's football team.[1] The so-called Fla-Flu derby is considered one of the biggest in the history of Brazilian football.[4] Three years later, in Fluminense's stadium, the Brazilian national football team debuted, against touring English club Exeter City.[1] It was also there that they won their first title, in the 1919.[5] 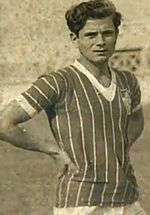 In an unfortunate event in 1914, Carlos Alberto, a mulatto playing for Fluminense, decided to cover himself in face powder to disguise the color of his skin. This ultimately led to one of the club's nicknames, pó de arroz, which is the Portuguese for 'white powder'.[7][8] Although, like almost all football teams in Brazil at the time, racism was common among Fluminense supporters, Fluminense has a long history of black players even before the football became a professional sport.[9] [10] [11]

The following years saw an expansion of the club's hegemony in Rio. Fluminense would remain unsurpassed in terms of state championships until 2009.[12] International acclaim came in 1949 with the awarding of the Olympic Cup, and was further fostered in 1952 with Fluminense's first intercontinental honor, the Copa Rio.[1][13] The club established itself regionally with victory in two Torneio Rio-São Paulo cups in 1957 and 1960.[1] National honors followed in 1970, 1984, 2010 and 2012 with Taça de Prata and Série A cups, respectively.,[1] also taking the Cup in Brazil in 2007.

From the 1950s, with the creation of the Rio-São Paulo Tournament, the forerunner of what eventually would become the national championship, Fluminense established itself regionally by winning the tournament title in the years of 1957 and 1960.

From the 1960s, the first national championships began to be played in Brazil. Fluminense's first national title came in 1970, in that time, Brazil had the best players in world football, and all of them played in Brazilians clubs. Although not counted in its squad with the main players of the season in Brazil, Fluminense won the Brazilian champion surpassing the great strengths of the time in Santos, Palmeiras and Cruzeiro.

In the 1970s, Fluminense signed up several famous players like Roberto Rivellino. This time, called as "maquina tricolor", it won the state championship in the years of 1975 and 1976. In the national championship, Fluminense lost in the semifinal matches to Internacional in 1975 and Corinthians in 1976.

Fluminense again became the Brazilian champion in 1984. This time, they won the state Championship in the years of 1983, 1984 and 1985 with players like Romerito, Ricardo Gomes, Deley, and the "Casal Vinte": Assis and Washington.

At the end of the 1980s, Copa do Brasil was created, inspired by the Cups tournament played in European countries. Fluminense reached the final of the Copa do Brasil for the first time in 1992, losing the final match to Internacional de Porto Alegre. 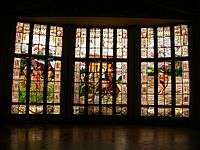 A disastrous campaign led to the club's relegation from Série A in 1996. A set of off-field political maneuvers (cheats), however, not performed by Fluminense, allowed Fluminense to remain in Brazil's top domestic league,[14] only to be relegated the next year.[15] Completely out of control, the club was relegated from Série B to Série C in 1998.[16] In 1999, Fluminense won the Série C championship and was to be promoted to Série B when it was invited to take part in Copa João Havelange,[17] a championship that replaced the traditional Série A in 2000. In 2001, it was decided that all clubs which took part in Copa João Havelange's so-called Blue Group should be kept in Série A,[18]

In 2002, 2005 and 2012, Fluminense won again the Campeonato Carioca. In 2005 Fluminense reached the final of the Copa do Brasil again, having lost the final match to Paulista Futebol Clube.

In 2007, Fluminense won the Copa do Brasil, after beating Figueirense in the final match, and was admitted in the Copa Libertadores again after 23 years.[1][19] The club's campaign led it into the finals and included remarkable matches against Arsenal de Sarandí, São Paulo and Boca Juniors.[20][21][22] Fluminense lost the cup to LDU Quito in a penalty shootout.[23]

After signing up 27 players and going through 5 different managers in 2009, Fluminense found itself struggling to avoid another relegation from Série A.[24] With less than one-third of the championship left, the mathematical probability of the club's relegation was of 98%.[25] At this point, manager Cuca decided to sack some of the more experienced players and gave Fluminense's youngsters a chance.[26] That, along with Fred's recovery from a serious injury and substantial support from the fans, allowed not only a sensational escape from relegation, but also placed Fluminense in the final of the Copa Sudamericana.[27][28] For the second year in a row, the club contested a continental cup. In a repeat of the previous year's Copa Libertadores, Fluminense lost the cup to LDU Quito.[29] 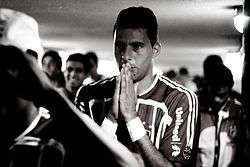 The Flu players before playing the 2008 Copa Libertadores final match.

In 2010, Fluminense won the Brazilian championship for the third time in its history, marking their third national championship after 1970 and 1984). It was also the fourth title for coach Muricy Ramalho in a decade: Ramalho had won the title three times in a row with São Paulo from 2006 to 2008. Darío Conca was named the Brazilian Championship's Player of Season, while Fred and Washington were decisive players in Fluminense's winning campaign.

On May 23, 2012, Fluminense lost the semifinal qualification match to Boca Juniors from Argentina, for the continental club football cup, Copa Libertadores.[30] Later that year, on November 11, they won their fourth Brazilian championship after defeating the near-relegated Palmeiras 3–2.[31] Fluminense won the Série A for the fourth time on November 11, 2012.[32]

In December 2013, a tie with Bahia in the last round of the 2013 Campeonato Brasileiro Série A had Fluminense mathematically relegated to the Série B. However, an irregular lineup by Portuguesa in the match against Grêmio in the previous round, which included midfielder Héverton, suspended for the affair, caused the Sâo Paulo side to lose 4 points after a trial in STJD (Brazil's governing football jury). That allowed Fluminense to stay in Série A, with Portuguesa being relegated instead. The move was widely criticized by fans and reporters alike, mainly because it marked the second time in 15 years that Fluminense was relegated but did not play the following year's Série B due to a legal decision.

Fluminense has taken part in 36 of the 38 official Serie A championships organized in Brazil since 1971.[33]

Companies that Fluminense Football Club currently has sponsorship deals with include: 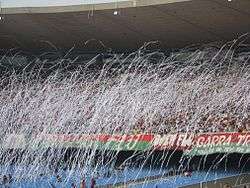 Fans of Fluminense at the Maracanã 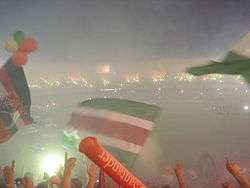 The supporters of Fluminense Football Club are usually related to the upper classes of Rio de Janeiro.[35] However, the popularity of the club reaches beyond the city limits. Recent polls have estimated the number of supporters to be between 1.3% and 3.7% of the Brazilian population.[36] Considering a population of 185 million people,[37] that would account for numbers between 2.73 and 6.84 million.

The best attendance ever observed in a match of Fluminense was registered on December 15, 1963 in a rally against Flamengo. On that day, an impressive amount of 194,000 people showed up at the Maracanã stadium.[38] This occasion remains as the stadium's record for a match between clubs.[39] 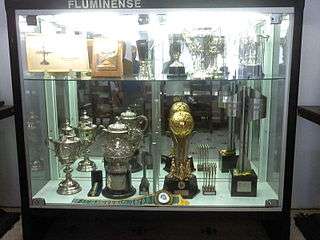 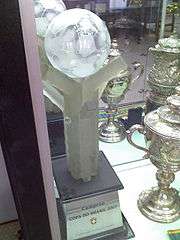 Some of the trophies won by Fluminense, exhibited at the club: (left): Campeonato Brasileiro Série A and Copa Rio amongst others; (right) The Copa do Brasil won in 2007.

According to the fluzao.info site, the average public paying the principal classics of Fluminense played in the Estádio do Maracanã is 60,107 against Flamengo, Vasco against the 43,735 of 34,359 against Botafogo of 25,127 against America and of 22,527 against Bangu, medium plus the public that these gifts could be about 20% higher, given the issues of the distribution of gratuities in the Maracanã .[49]

Considering the interstate clashes, the derby against Corinthians is perhaps the most representative among the various confrontations with big Brazilian clubs played by Fluminense, given the fact that these clubs often intersect at decisive moments in their stories, either by the end Rio Cup, the direct contest in several Tournaments Rio-São Paulo since 1940, or by the qualifying rounds of the Championship or Cup of Brazil,[50][51] in the great struggle of the 2010 Série A when the two clubs contending for the title from the early stages of the championship with Corinthians been beaten for the Championship by Fluminense in the final round, as was the case in 2011, when Corinthians were crowned champions and the Tricolor, considered the best team during second round of the league, were placed third after the final match day.

Players with most appearances

Coaches with most appearances