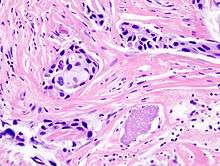 Histopathology: microscopic appearance of invasive ductal carcinoma of the breast. The slide is stained with Haematoxylin & Eosin. 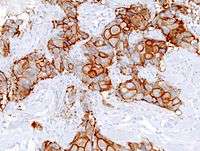 Histopathology: microscopic appearance of invasive ductal carcinoma of the breast. The slide is stained with an antibody (immunohistochemistry) against the ongene Her2neu. The dark-brown reaction indicates that this tumor over-expresses this gene. 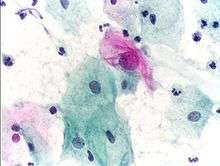 Cytopathology: microscopic appearance of a Pap test. The pink cell at the center with a large nucleus is abnormal, compatible with low-grade dysplasia. 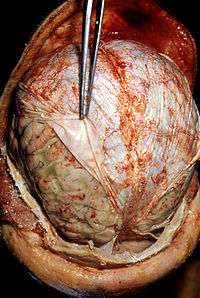 Autopsy: a brain surrounded by pus (the yellow-greyish coat around the brain, under the dura lifted by the forceps), the result of bacterial meningitis. 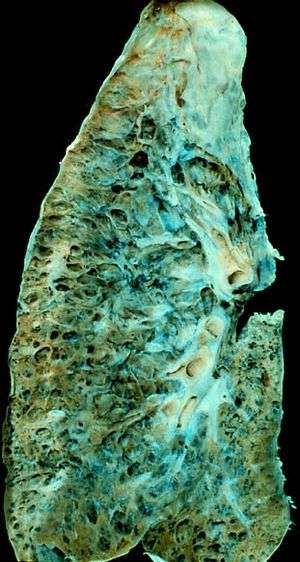 Gross examination: appearance of the cut surface of a lung showing the honeycomb pattern of end-stage pulmonary fibrosis.

Gross examination: appearance of a colorectal polyp (the cauliflower-shaped tumor) attached to the colon mucosa (the horizontal line at the bottom).

Anatomical pathology (Commonwealth) or Anatomic pathology (U.S.) is a medical specialty that is concerned with the diagnosis of disease based on the macroscopic, microscopic, biochemical, immunologic and molecular examination of organs and tissues. Over the last century, surgical pathology has evolved tremendously: from historical examination of whole bodies (autopsy) to a more modernized practice, centered on the diagnosis and prognosis of cancer to guide treatment decision-making in oncology. Its modern founder was the Italian scientist Giovan Battista Morgagni from Forlì.

Anatomic pathology relates to the processing, examination, and diagnosis of surgical specimens by a physician trained in pathological diagnosis. Clinical pathology is the division that processes the test requests more familiar to the general public; such as blood cell counts, coagulation studies, urinalysis, blood glucose level determinations and throat cultures. Its subsections include chemistry, hematology, microbiology, immunology, urinalysis and blood bank.[1]

Anatomical pathology is itself divided in subspecialties, the main ones being surgical pathology (breast, gynecological, endocrine, gastrointestinal, GU, soft tissue, head and neck, dermatopathology), neuropathology, hematopathology cytopathology, and forensic pathology. To be licensed to practice pathology, one has to complete medical school and secure a license to practice medicine. An approved residency program and certification (in the U.S., the American Board of Pathology or the American Osteopathic Board of Pathology) is usually required to obtain employment or hospital privileges.

The procedures used in anatomic pathology include:

In the United States, subspecialty-trained doctors of dentistry, rather than medical doctors, can be certified by a professional board to practice Oral and Maxillofacial Pathology.

Cytopathology is a sub-discipline of anatomical pathology concerned with the microscopic examination of whole, individual cells obtained from smears or fine needle aspirates. Cytopathologists are trained to perform fine-needle aspirates of superficially located organs, masses, or cysts, and are often able to render an immediate diagnosis in the presence of the patient and consulting physician. In the case of screening tests such as the Papanicolaou smear, non-physician cytotechnologists are often employed to perform initial reviews, with only positive or uncertain cases examined by the pathologist. Cytopathology is a board-certifiable subspecialty in the U.S.

Molecular pathology is an emerging discipline within anatomical and clinical pathology that is focused on the use of nucleic acid-based techniques such as in-situ hybridization, reverse-transcriptase polymerase chain reaction, and nucleic acid microarrays for specialized studies of disease in tissues and cells. Molecular pathology shares some aspects of practice with both anatomic and clinical pathology, and is sometimes considered a "crossover" discipline.

Forensic pathologists receive specialized training in determining the cause of death and other legally relevant information from the bodies of persons who died suddenly with no known medical condition, those who die from non-natural causes, as well as those dying as a result of homicide, or other criminally suspicious deaths. A majority of the forensic pathologists cases are due to natural causes. Often, additional tests such as toxicology, histology, and genetic testing will be used to help the pathologist determine the cause of death. Forensic pathologists will often testify in courts regarding their findings in cases of homicide and suspicious death. They also play a large role in public health, such as investigating deaths in the workplace, deaths in custody, as well as sudden and unexpected deaths in children. Forensic pathologists often have special areas of interest within their practice, such as sudden death due to cardiac pathology, deaths due to drugs, or Sudden Infant Death (SIDS), and various others.

Anatomical Pathology one of the specialty training programs offered by the Royal College of Pathologists of Australasia (RCPA). The RCPA. To qualify as a Fellow of the RCPA in Anatomical Pathology, the candidate must complete a recognised undergraduate or postgraduate medical qualification, then complete a minimum of 1 year of clinical medical experience (internship)as a prerequisite to selection as a training registrar. The training program is a minimum of 5 years, served in at least two laboratories, and candidates must pass a Basic Pathological Sciences examination (usually in first year), the Part 1 examination (not before 3rd year) and the Part 2 examination (not before 5th year). Fellows may then continue into subspecialty training.

Anatomical Pathology (AP) is one of the specialist certificates granted by the Royal College of Physicians and Surgeons of Canada. Other certificates related to pathology include general pathology (GP), hematopathology, and neuropathology. Candidates for any of these must have completed four years of medical school and five years of residency training.

Anatomic Pathology (AP) is one of the two primary certifications offered by the American Board of Pathology (the other is Clinical Pathology (CP))[2] and one of three primary certifications offered by the American Osteopathic Board of Pathology.[3] To be certified in anatomic pathology, the trainee must complete four years of medical school followed by three years of residency training. Many U.S. pathologists are certified in both AP and CP, which requires a total of four years of residency. After completing residency, many pathologists enroll in further years of fellowship training to gain expertise in a subspecialty of AP or CP.