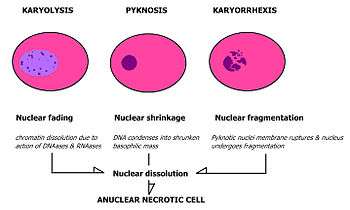 Morphological characteristics of pyknosis and other forms of nuclear destruction 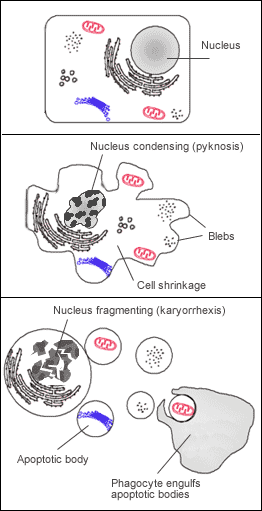 Karyorrhexis (from Greek κάρυον karyon, "kernel, seed or nucleus", and ῥῆξις rhexis, "bursting") is the destructive fragmentation of the nucleus of a dying cell[1] whereby its chromatin is distributed irregularly throughout the cytoplasm. It is usually preceded by pyknosis and can occur as a result of either programmed cell death (apoptosis), senescence, or necrosis.

In apoptosis, the cleavage of DNA is done by Ca2+ and Mg2+ -dependent endonucleases.