Animal migration is the relatively long-distance movement of individuals, usually on a seasonal basis. It is found in all major animal groups, including birds, mammals, fish, reptiles, amphibians, insects, and crustaceans.[1] The trigger for the migration may be local climate, local availability of food, the season of the year or for mating reasons.[2] To be counted as a true migration, and not just a local dispersal or irruption, the movement of the animals should be an annual or seasonal occurrence, such as Northern hemisphere birds migrating south for the winter; wildebeest migrating annually for seasonal grazing; or a major habitat change as part of their life, such as young Atlantic salmon leaving the river of their birth when they have reached a few inches in size.[3] 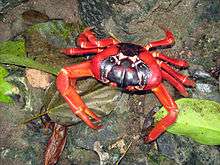 A Christmas Island red crab on its migration

Migration can take very different forms in different species, and as such there is no simple accepted definition of migration. One of the most commonly used definitions, proposed by Kennedy[4] is

Migratory behavior is persistent and straightened out movement effected by the animal’s own locomotory exertions or by its active embarkation upon a vehicle. It depends on some temporary inhibition of station keeping responses but promotes their eventual disinhibition and recurrence.

The three main types of migration are pilotage, compass orientation, and true navigation.

Irregular (non-cyclical) migrations such as irruptions can occur under pressure of famine, overpopulation of a locality, or some more obscure influence.[7] 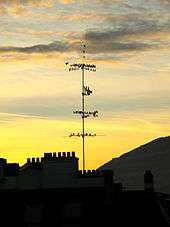 Approximately 1,800 of the world's 10,000 bird species migrate long distances each year in response to the seasons.[8] Many of these migrations are north-south, with species feeding and breeding in high northern latitudes in the summer, and moving some hundreds of kilometres south for the winter.[9] Some species extend this strategy to migrate annually between the Northern and Southern Hemispheres. The Arctic tern is famous for its migration; it flies from its Arctic breeding grounds to the Antarctic and back again each year, a distance of at least 19,000 km (12,000 mi), giving it two summers every year.[10] The average arctic tern will travel the equivalent of going around the Earth 60 times in their lifetime. 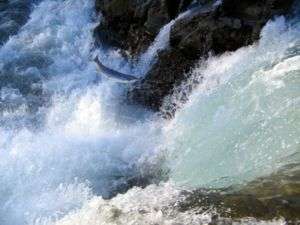 Many species of salmon migrate up rivers to spawn

Most fish species are relatively limited in their movements, remaining in a single geographical area and making short migrations for wintering, to spawn, or to feed. A few hundred species migrate long distances, in some cases of thousands of kilometres. About 120 species of fish, including several species of salmon, migrate between saltwater and freshwater (they are 'diadromous').[11][12]

Forage fish such as herring and capelin migrate around substantial parts of the North Atlantic ocean. The capelin for example spawn around the southern and western coasts of Iceland; their larvae drift clockwise around Iceland, while the fish swim northwards towards Jan Mayen island to feed, and return to Iceland parallel with Greenland's east coast.[13]

In the 'sardine run', billions of Southern African pilchard Sardinops sagax spawn in the cool waters of the Agulhas Bank and move northward along the east coast of South Africa between May and July.[14] 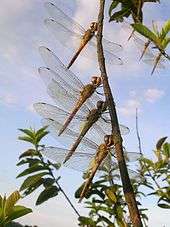 Some winged insects such as locusts and certain butterflies and dragonflies with strong flight migrate long distances. Among the dragonflies, species of Libellula and Sympetrum are known for mass migration, while Pantala flavescens, known as the globe skimmer or wandering glider dragonfly, makes the longest ocean crossing of any insect, between India and Africa.[15] Exceptionally, swarms of the desert locust, Schistocerca gregaria, flew westwards across the Atlantic ocean for 4500 km during October 1988, using air currents in the Inter-Tropical Convergence Zone.[16]

In some migratory butterflies, such as the monarch butterfly and the painted lady, no individual completes the whole migration. Instead the butterflies mate and reproduce on the journey, and successive generations travel the next stage of the migration.[17]

Wildebeest on the Serengeti 'great migration'

Mass migration occurs in mammals such as the Serengeti 'great migration', an annual circular pattern of movement with some 1.7 million wildebeest and hundreds of thousands of other large game animals including gazelles and zebra.[18][19]

Migration is important in other mammals including Cetaceans, whales, dolphins and porpoises.[20] Long-distance migrations occur in some bats, notably the mass migration of the Mexican free-tailed bat between Oregon and southern Mexico.[21]

Some reptiles and amphibians migrate.[22]

Some crustaceans migrate, most spectacularly the Christmas Island red crab which moves en masse each year by the million.[23]

Scientists gather observations of animal migration by tracking their movements. Animals were traditionally tracked with identification tags such as bird rings for later recovery; no information was obtained about the actual route followed between release and recovery, and only a small fraction of tagged individuals were generally recovered. More convenient, therefore, are electronic devices such as radio tracking collars which can be followed by radio, whether handheld, in a vehicle or aircraft, or by satellite. Tags can include a GPS receiver, enabling accurate positions to be broadcast at regular intervals, but these are inevitably heavier and more expensive than devices without GPS. An alternative is the Argos Doppler tag, also called a 'Platform Transmitter Terminal' (PTT) which sends regularly to the polar-orbiting Argos satellites; using Doppler shift, the animal's location can be estimated, relatively roughly compared to GPS, but at lower cost and weight.[24]

Radio tracking tags can be fitted to insects including dragonflies and bees.[25]

Before the phenomenon of animal migration was understood, various folklore and erroneous explanations sprang up to account for the disappearance or sudden arrival of birds in an area. In Ancient Greece, Aristotle proposed that robins turned into redstarts when summer arrived.[26] The barnacle goose was explained in European Medieval bestiaries and manuscripts as either growing like fruit on trees, or developing from goose barnacles on pieces of driftwood.[27] Another example is the swallow, which was once thought, even by naturalists such as Gilbert White, to hibernate either underwater, buried in muddy riverbanks, or in hollow trees.[28]