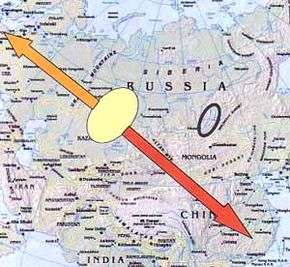 Reverse migration is a phenomenon in bird migration. Although some large birds such as swans learn migration routes from their parents, in most small species, such as passerines, the route is genetically programmed, and young birds can innately navigate to their wintering area. Sometimes this programming goes wrong, and the young bird, in its first autumn, migrates on a route 180° from the correct route. This is shown in the diagram, where the breeding range of a hypothetical Asian species is shown in yellow. The correct migration route to the wintering grounds in south east Asia is indicated in red.

If a bird sets off in the opposite direction, shown by the orange arrow, it will end up in Western Europe instead of South East Asia. This is a mechanism that leads to birds such as Pallas's warbler turning up thousands of kilometres from where they should be. Keith Vinicombe suggested[1] that birds from east of Lake Baikal in Siberia (circled) could not occur in western Europe because the migration routes were too north-south. Most of these lost young birds perish in unsuitable wintering grounds, but there is some evidence that a few survive, and either re-orient in successive winters, or even return to the same area.

An article in British Birds by James Gilroy and Alexander Lees in September 2003 suggested that misorientation occurs in random directions, but differential survival in different directions combined with asymmetric observer coverage leads to the observed distribution of vagrants. Although "reverse migration" per se certainly does occur, and has been documented well in numerous instances, it does not account for the occurrence in Europe in autumn of Asian vagrants that winter in East Africa, for instance, or the rarity of many southern European species in the UK that winter in West Africa.[2]