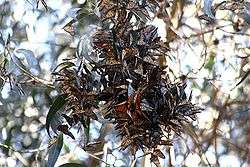 Monarch butterfly is the best known migrant amongst the Lepidoptera. 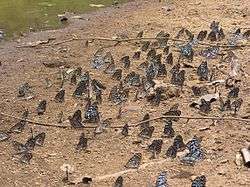 Tirumala septentrionis migrate in millions between Eastern Ghats and Western Ghats in India. 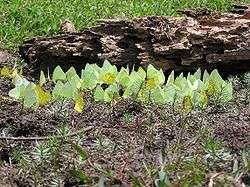 Many populations of Lepidoptera (butterflies or moths) migrate, sometimes long distances, to and from areas which are only suitable for part of the year. Lepidopterans migrate on all continents except Antarctica, including from or within subtropical and tropical areas. By migrating, these species can avoid unfavorable circumstances, including weather, food shortage, or over-population. In some lepidopteran species, all individuals migrate; in others, only some migrate.

The best-known Lepidopteran migration is that of the eastern population of the Monarch butterfly which migrates from southern Canada to wintering sites in central Mexico. In late winter/early spring, the adult monarchs leave the Transvolcanic mountain range in Mexico for a more northern climate. Mating occurs and the females begin seeking out milkweed to lay their eggs, usually first in northern Mexico and southern Texas. The caterpillars hatch and develop into adults that move north, where more offspring can go as far as Central Canada until next migratory cycle.

Migration in Lepidoptera means a regular, predictable movement of a population from one place to another, determined by the seasons.[1] There is no unambiguous definition of migratory butterfly or migratory moth, and this also applies to proposals to divide them into classes.[2] Migration means different things to behavioral scientists and ecologists. The former emphasize the act of moving whereas the latter discriminate between whether the movement has been ecologically significant or not. Migration may be viewed as "a behavioural process with ecological consequences".[1]

Migration in Lepidoptera takes place in two of the three modes of migration identified by Johnson (Johnson, 1969). In the first mode (also Johnson's first), the Lepidoptera move in one direction in their short life-span and do not return. An example is the pierid butterfly, Ascia monuste, which breeds in Florida but sometimes migrates along the coast up to 160 kilometers to breed in more suitable areas.[1]

In the second mode (Johnson's third), migration takes place to a place of hibernation or aestivation where they undergo diapause and the same generation survives to return. The classic example is that of the nymphalid Monarch butterfly (Danuas plexippus).[1]

Species that are recorded in unexpected areas (adventive species) are not considered to be migratory species, because these did not leave their habitat on their own strength. Examples are species that are imported as egg or caterpillar alongside of their host plants or individuals that were reared by a collector but have escaped. An example of an introduced species is Galleria mellonella, which is found all over the world, because it is reared as food for captive birds and reptiles. At times it is difficult to decide if a species is adventive or migratory. Migratory species like Chrysodeixis chalcites and Helicoverpa armigera would be able to reach Western Europe on their own, but are also common in greenhouses. 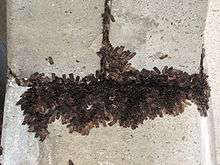 Australian species Agrotis infusa spends the summer as an imago in the Australian Alps, and is sometimes found in buildings in large numbers.

Lepidoptera migration is often seasonal. With species of which all individuals migrate, the population moves between areas in the summer and winter season or the dry and wet season.

For species of which only part of the population migrates, seasonal migration is hard to determine. They can maintain themselves in part of their habitat but also reach areas where they cannot establish a permanent population. They only live there in the season that is most favorable for the species. Some of the species have the habit of returning to their permanent residence at the end of the season.

An important difference with bird migration is that an individual butterfly or moth usually migrates in one direction, while birds migrate back and forth multiple times within their lifespan. This is due to the short lifespan as an imago. Amazingly the Monarch receives no navigation instruction for the migration from their parents, unlike birds.[3][4] Species that migrate back and forth, usually do so in different generations. There are however, some exceptions:

The small Diamondback moth is a migratory species which can be found at altitudes of a 100 meters. It is capable of covering over 3,000 kilometers.

Migratory Lepidoptera are, in most cases, excellent flyers. Species like the Vanessa atalanta are capable of managing a fierce headwind. In case of headwind, they usually fly low and are more goal-oriented.[5] During migration, some species can be found on high altitudes, ranging to up to two kilometers [6][7] This is especially noteworthy for day-flying species like Vanessa atalanta, since the temperatures on these altitudes are low and day-flying species depend on the outside temperature to stay warm. It is thought that Vanessa atalanta produces enough body warmth during flight since it has also been recorded migrating at night.

In the case of transcontinental migration where distances are large, the flying speed of the butterfly ( of the order of 3 metres per second or less) is inadequate for timely completion of journey. The migration is carried out by relying on heavy winds; a persistent wind speed of 10 metres per second being able to provide a displacement of 300 to 400 kilometers in a single day.[8] For example, the Painted Lady (Vanessa cardui) migrates from Africa to Spain aided by tail winds.[9]

That the migratory species are good flyers, is not the same as saying they are robust flyers. The small Diamondback moth is also a migratory species that migrates 3,000 kilometers and can be found up to altitudes of 100 meters or more.[10][11]

To be able to migrate over long distances, species must be able to navigate. There are several ways they do this.

Landscape: Lepidoptera use coastal lines, mountains, but also man-made roads to orient themselves. Above sea it has been observed that the flight direction is much more accurate if the landscape on the coast is still visible.[5]

Celestial navigation: Butterflies are known to be capable of navigation with the help of the sun. They can also navigate by using polarized light. The polarization of the sun's light changes with the angle of the rays, hence they can also navigate with cloudy weather. There are indications that they can even make corrections depending on the time on a day. Diamondback moths are known to fly in a straight trajectory which is not dependent on the angle of the sun's rays.[12] Tests have been performed to interfere with the biological clock of certain species by keeping them in the dark and then observing if they would choose for other flight paths. The conclusion was that some species did, and others did not.[13] Research on monarchs demonstrates that with removal of antennae, the location of the circadian clock, individuals do not localize in any one direction during flight as they do with antennae intact.[14] Night flyers cannot use sun light for navigation. Most of these species rely on the moon and stars instead.

Earth’s magnetic field: A number of moths use the Earth's magnetic field to navigate, as a study of the stray Heart and Dart[15] suggests. Another study, this time of the migratory behaviour of the Silver Y, showed that this species, even at high altitudes, can correct its course with changing winds, and prefers flying with favourable winds, which suggests a great sense of direction.[16] Aphrissa statira in Panama loses its navigational capacity when exposed to a magnetic field, suggesting it uses the Earth’s magnetic field.[17]

Areas where migratory butterflies and moths can be found 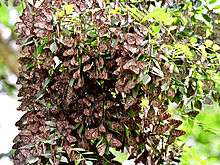 Some examples of Migratory Lepidoptera are:

The green areas are the areas where Macroglossum stellatarum can survive year round. In the blue areas it can be found in summer. In the yellow area it is found in winter

Macroglossum stellatarum is a moth that is recorded in the subtropical part of the Palearctic ecozone year round. In summer, the species disperses north up to Scandinavia and Iceland. In winter it migrates further south, deeper into Africa and to the Indian subcontinent.

In the Netherlands and Belgium, there are 100 to 200 records per year in an average year. In warm summers however, like the years 2005 and 2006, several thousand are recorded.[24] In mild winters, small numbers can survive this far north, but these numbers are insufficient to call it a real population.[2]

Usually, butterflies and moths migrate to escape from potentially harmful circumstances. Examples of this are a shortage of proper food plants, an unfavorable climate, like cold or extreme rain or overpopulation.

A phenomenon like migration is an evolutionary development. By migrating, the species has survived the process of natural selection. There are a number of advantages and disadvantages to migration. An example of this is the protozoan Ophryocystis elektroscirrha a parasite of the monarch. Severely infected individuals are weak, unable to expand their wings, or unable to eclose, and have shortened lifespans, but parasite levels vary in populations. This is not the case in laboratory or commercial rearing, where after a few generations, all individuals can be infected.[25] Infection with this parasite creates an effect known as culling whereby migrating monarchs that are infected are less likely to complete the migration. This results in overwintering populations with lower parasite loads.[26] 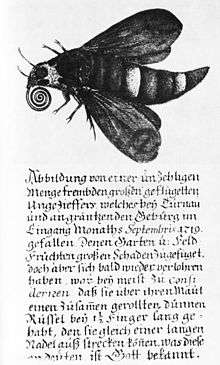 Record of a massive appearance of (presumably) Agrius convolvuli in 1719 near Turnau.

When flying at high altitudes, spotting migrating butterflies or moths can be hard. Low flying species are easily spotted or caught using a light trap. When individuals fly too high for these methods, air balloons equipped with nets are used at times. Alternatively, radar is used to monitor migration.[10]

Another registration technique, is marking the wings with tiny stickers, a technique comparable with Bird ringing. This technique has not proven to be very successful though.[5] Advances in technology might make it possible to equip individuals with micro transmitters in the future.

Global warming has caused an increase of migratory butterflies and moths that reach north-western European countries like the Netherlands, Belgium and the United Kingdom. Research in the United Kingdom confirms that an increasing number of migrants reach the country. Because one would expect that migratory species can adapt to new circumstances quite well, the researches warn for new species that can have a negative impact on native species and possible damage to both health (species like the Oak Processionary) and agriculture.[27]