Pope Anianus, 2nd Pope of Alexandria & Patriarch of the See of St. Mark. He was ordained as the successor of Saint Mark the Evangelist, and was also the first convert Mark won to Christianity in the region.[2] 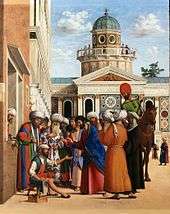 The Healing of Anianus by Cima da Conegliano

As Mark was entering Rakotis, a suburb of Alexandria, after his trip from Cyrene to the Pentapolis, the strap of his sandal fell off. He found a cobbler, Anianus, to repair it. While he was working on the sandal, the awl slipped in Anianus' hand, piercing it. Anianus cried "Heis ho Theos" ("God is one") in response to the pain. Mark took the opportunity of Anianus' scream to preach the Gospel of Christianity to him, at the same time reportedly miraculously healing Anianus of his wound.[2]

How it was that Anianus was a monotheist in Alexandria is a matter of conjecture. Some have suggested that he was himself a Jew, or perhaps a pagan native who had come under the influence of the wealthy Jewish community, and learned his monotheistic beliefs there.[2] Others have held that Anianus was a noble, although this does seem to be contrary to the documents available.[2]

In any event, Mark was invited to Anianus' house, where he taught Anianus' family the Gospel and baptized them all. A large number of natives of the area were quickly converted by Mark and his followers, causing those citizens who did not convert to feel obliged to defend their local gods against the new faith.[2]

Mark, the outsider, decided it might be best if he were to leave the area for a while. He ordained Anianus to be bishop in his absence. He also ordained three presbyters and seven deacons at the same time, charging the group of them with watching over the church of the area in his absence.[2]

Mark was gone for a period of two years, during which time he is said to have gone to Rome, Aquileia, and the Pentapolis, preaching, performing miracles, and winning converts to Christianity at each location. On Mark's return, he found that the church in Alexandria had grown significantly, and that they were able to build a church for themselves at Bucolia on the shore of the eastern harbor of Alexandria, also known as the Portus Magnus of the Ptolemaic dynasty.[2]

Following the martyrdom of Mark on the 30th day of Baramudah, Anianus became the patriarch of the church in Alexandria. He would remain in that capacity for over seventeen and one-half years. During that time, the number of Christians in the area grew significantly, and Anianus ordained new priests and deacons for the growing church. The extent of the evangelization they performed is unknown, although it has been thought by some that it was done at least somewhat covertly, given the hostility the pagan population demonstrated to the new faith. Anianus died in bed, and was buried next to Mark at the church in Baucalis.[2]

He is regarded as a saint, with a feast day of 25 April in the Eastern Orthodox Church.