Anthony David Madison (born October 8, 1981) is a former American football defensive back. He was signed by the Pittsburgh Steelers as an undrafted free agent in 2006. Winning Super Bowl XLIII against the Arizona Cardinals with the Steelers is his biggest feat. He played college football at Alabama.

Madison went to high school in Thomasville. He played quarterback, wide receiver, running back, defensive back and also returned kicks. He was a two-time all-state pick. Rivals top 100 and was considered by many to be a Charlie Ward type athlete. He received scholarship offers from the likes of Auburn, Ole Miss and LSU but ultimately choosing to play for The University of Alabama. His high school career stats include 14 interceptions and over 4,000 yards of offense. He also earned all state honors as a basketball player.

Madison played his collegiate football at the University of Alabama. He started in 37 out of the 50 games he played and had 140 tackles, 5 interceptions, and 30 passes defensed. He earned team awards such as: Committed to Excellence, Most improved Corner, Jerry Duncan I Like to Practice Award and Charlie Compton award, which is given to the player who exemplifies faith and hard work. All Bowl Team (2005) honorable mention All SEC (2005). Bachelors in 3 1/2 years with Marketing degree. Currently, he is pursuing a master's degree in Counseling at California State University, Fullerton.

Anthony Madison is a Super bowl winning Cornerback that has appeared in 2 Super-bowls and winning against the Arizona Cardinals during the (2008) season and losing to the Packers (2010) . He boast 2 AFC Championships. 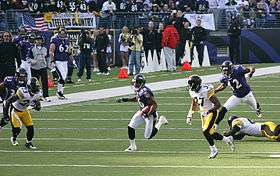 Madison (37) playing against the Baltimore Ravens in 2006.

Madison was signed as an undrafted free agent by the Pittsburgh Steelers in 2006. He spent the first 4 weeks of the 2006 season on the practice squad before he was added to the active roster to fill a hole in the lineup left by the injury of cornerback Ricardo Colclough. His rookie season stats include 12 tackles (10 solo) in 13 games.

Madison played for the Tampa Bay Buccaneers during the 2006 season.

Madison signed with the Cleveland Browns on September 22, 2009. He was waived on November 3.

Madison was signed by the Indianapolis Colts on November 10, 2009. He was waived on December 1.

Madison was claimed off waivers by the Pittsburgh Steelers on December 2, 2009. He was crowned AFC Champion and advanced to Super bowl where they lost to Greenbay Packers. He contributed to AFC championship and the Steelers advanced to the Super bowl where they lost to the Greenbay Packers. He led the team in Special teams tackles with 28 and recorded an interception during the season.

On August 13, 2011, Madison signed with the Detroit Lions, but was released on September 3. He was re-signed by Detroit on September 27 and released on November 7 along with Eldra Buckley to make room for free agent signings Leonard Davis and Kevin Smith (running back).

On January 2, 2012, Madison re-signed with Pittsburgh for the playoffs, which would be the final game of his career. He retired during the offseason of 2012