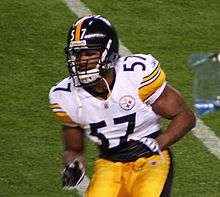 Keyaron James Fox /kiˈærən/, born January 24, 1982) is a former American football linebacker. He was drafted by the Kansas City Chiefs in the third round of the 2004 NFL Draft. He played college football at Georgia Institute of Technology (Georgia Tech).

Fox also played for the Pittsburgh Steelers, Washington Redskins, and Houston Texans. He won Super Bowl XLIII during his tenure with the Steelers.

He played in 45 games (35 starts) during his tenure at Georgia Tech and finished his career with 376 tackles, 9 sacks, 40 tackles for loss, one INT, two fumble recoveries, six forced fumbles, 14 passes defensed, and seven QB pressures. He majored in management.

Fox was originally selected by the Kansas City Chiefs in the third round (93rd overall) of the 2004 NFL Draft. In his rookie season he played 12 games and finished the campaign with 7 tackles. His second season with the Chiefs was low key as he only recorded three tackles. In 2006, Fox had a career high season with 52 tackles and one sack. In his final year with the Chiefs, he played in ten games, recording 21 tackles.[1]

On March 12, 2008 Fox signed with the Pittsburgh Steelers as a free agent.[2] He recorded 17 tackles in 13 games in 2008 as the Steelers beat the Arizona Cardinals in Super Bowl XLIII.

In week 6 of the 2009 season, Fox filled in for an injured Lawrence Timmons, where he intercepted a Brett Favre pass running it back for an 82-yard touchdown to help the Steelers secure a 27-17 victory over the undefeated Minnesota Vikings.

On August 6, 2011, Fox signed with the Washington Redskins.

On July 26, 2012, Fox signed with the Houston Texans. During training camp, he suffered a knee injury and was placed on the injured reserve list on August 9.[5]