He was nominated for the Academy Award for Best Supporting Actor for his second film, Friendly Persuasion but is best known for playing Norman Bates in Alfred Hitchcock's Psycho and its three sequels.

His other films include The Trial, Phaedra, Fear Strikes Out, Tall Story, The Matchmaker, Pretty Poison, North Sea Hijack, Five Miles to Midnight, The Black Hole, Murder on the Orient Express, Mahogany, and Crimes of Passion.

Perkins was born in New York City, son of stage and film actor Osgood Perkins and his wife, Janet Esselstyn (née Rane). His paternal great-grandfather was wood engraver Andrew Varick Stout Anthony.[1] He was five when his father died.[2] Perkins was a descendant of a Mayflower passenger, John Howland. He attended Brooks School, Browne & Nichols School, Columbia University and Rollins College, having moved to Boston in 1942.[3]

Perkins made his film debut in The Actress (1953). He received the Golden Globe Award for New Star of the Year – Actor and an Academy Award nomination for his second film, Friendly Persuasion (1956). The tall (6'2", 188 cm) Perkins also portrayed the troubled former Boston Red Sox baseball player Jimmy Piersall in the 1957 biopic Fear Strikes Out.

Following this, he released three pop music albums in 1957 and 1958 on Epic and RCA Victor as "Tony Perkins".[4] His single "Moon-Light Swim" was a hit in the United States, peaking at number 24 on the Billboard Hot 100 in 1957.[5] He showcased his musical talents in The Matchmaker (1958) with Shirley Booth and Shirley MacLaine.

A life member of the Actors Studio,[6] Perkins also acted in theater. In 1958, he was nominated for a Tony Award for Best Actor in a Play for his performance in Look Homeward, Angel on Broadway. He played the role of Eugene Gant.

Perkins in youth had a boyish, earnest quality, reminiscent of the young James Stewart, which Alfred Hitchcock exploited and subverted when the actor starred as Norman Bates in the 1960 film Psycho (1960). The film was a critical and commercial success, and gained Perkins international fame for his performance as the homicidal owner of the Bates Motel. Perkins' performance gained him the Best Actor Award from the International Board of Motion Picture Reviewers. The role and its multiple sequels affected the remainder of his career.

In 1961, Perkins received considerable critical acclaim for his performance in the film Goodbye Again, opposite Ingrid Bergman, a performance which won him the Best Actor Award at the 1961 Cannes Film Festival. 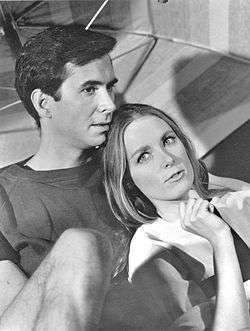 With Charmian Carr in Evening Primrose, 1966

After that came a successful career in Europe, including the role of Joseph K. in Orson Welles' 1962 adaptation of Kafka's The Trial (1962). In 1964 he starred in Une ravissante idiote, with Brigitte Bardot.

Upon returning to America, he took the role of a disturbed young murderer in Pretty Poison (1968) opposite Tuesday Weld. He also played Chaplain Tappman in Catch-22 (1970). Perkins co-wrote, with composer/lyricist Stephen Sondheim, the screenplay for the 1973 film The Last of Sheila, for which they received a 1974 Edgar Award from the Mystery Writers of America for Best Motion Picture Screenplay.

In 1972, he appeared in Play It as It Lays and The Life and Times of Judge Roy Bean. Perkins was one of the many stars featured in the 1974 hit Murder on the Orient Express. He also hosted television's Saturday Night Live in 1976 and was featured in the box office-smash and space opus, Walt Disney's The Black Hole, in 1979.

His Broadway credits also included the 1967 Neil Simon comedy The Star-Spangled Girl, the Frank Loesser musical Greenwillow (1960), for which he was nominated for another Tony Award for Best Actor in a Musical and Bernard Slade's 1979 play Romantic Comedy opposite Mia Farrow.

Perkins reprised the role of Norman Bates in three sequels to Psycho. The first, Psycho II (1983), was a box office success 23 years after the original film. He then starred in and directed Psycho III (for which he was nominated for a Saturn Award for Best Actor) in 1986, but refused to reprise his role as Bates in the failed television pilot Bates Motel, famously boycotting the project in a very ardent, and well-received, oppositional public campaign. He did play Bates in the following made-for-cable film Psycho IV: The Beginning in 1990, over which he had much creative control, although he was turned down for director. He directed a comedy horror film in 1988 called Lucky Stiff.

Perkins has a star on the Hollywood Walk of Fame, an honor he received for his influential and exceptional contributions to the motion picture industry. It is located at 6801 Hollywood Boulevard in Los Angeles.

In 1991, Perkins was honored with the Donostia Lifetime Achievement Award at the San Sebastián International Film Festival.

Although he was fighting AIDS, he appeared in eight television productions between 1990 and 1992, including Daughter of Darkness (1990) and The Naked Target (1992). He made his final appearance in In the Deep Woods (1992) with Rosanna Arquette. He had agreed to provide the voice for the role of the dentist, Dr. Wolfe, in The Simpsons episode "Last Exit to Springfield" but died before the part could be recorded. In the end, the character was voiced by Simpsons regular Hank Azaria.[7]

Perkins was portrayed by British actor James D'Arcy in the 2012 biographical drama Hitchcock, which starred Anthony Hopkins as Alfred Hitchcock and Helen Mirren as Alma Reville.

While young, Perkins was a very shy person, especially in the company of women.[8] According to the posthumous biography Split Image by Charles Winecoff, he had exclusively same-sex relationships until his late 30s, including with actors Rock Hudson and Tab Hunter; artist Christopher Makos; dancer Rudolf Nureyev; composer/lyricist Stephen Sondheim; and dancer-choreographer Grover Dale.[9] Perkins has been described as one of the two great men in the life of French author Patrick Loiseau.[10]

Perkins reportedly had his first heterosexual experience at age 39 with actress Victoria Principal[11] on location filming The Life and Times of Judge Roy Bean in 1971.[8] He met photographer Berinthia "Berry" Berenson the following year at a party in New York City.[8] They married when he was age 41, on August 9, 1973 and had two sons: actor Oz Perkins (b. February 2, 1974), and musician Elvis Perkins (b. February 9, 1976).[12]