Jean Dujardin (French pronunciation: [ʒɑ̃ dy.ʒaʁ.dɛ̃]; born 19 June 1972) is a French actor, director and comedian. He began his career as a stand-up comedian in Paris before starting his acting career guest-starring in comedic television programs and films. He starred in Michel Hazanavicius's OSS 117: Cairo, Nest of Spies and its sequel OSS 117: Lost in Rio as secret agent Hubert Bonisseur de La Bath. He also starred in 99F (99 francs).

Jean Dujardin was born on 19 June 1972 and raised in Rueil-Malmaison (Hauts-de-Seine, Île-de-France region), a commune in the western suburbs of Paris, France.[2] After attending high school, he went to work for the construction company of his father, Jacques Dujardin.[3][4] Dujardin began contemplating a career in acting while serving his mandatory military service a few years later.[3] 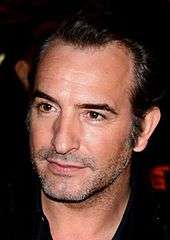 Dujardin began his acting career performing a one-man show he wrote in various bars and cabarets in Paris.[3] He first gained attention when he appeared on the French talent show Graines de star in 1996 as part of the comedy group Nous Ç Nous, which was formed by members of the Carré blanc theater.

From 1999 to 2003, Dujardin starred in the France production of the originally Canadian comedy series Un gars, une fille, alongside his future wife Alexandra Lamy, before transitioning to a career in film. The TV series charted the path of a relationship; each episode was less than ten minutes long. In 2005, he portrayed the titular surfer in the popular comedic film Brice de Nice and performed on its accompanying soundtrack.

In 2006, Dujardin starred as racist, sexist secret agent Hubert Bonisseur de La Bath in the comedy OSS 117: Cairo, Nest of Spies, a role which earned him an Etoile D'Or Award and a César Award nomination for Best Actor. The film's success spawned a sequel, OSS 117: Lost in Rio. In 2007, directed by Jan Kounen, he starred in the film 99F (99 francs), a very successful existential parody of an advertising exec, adapted from the eponymous best-seller written by Frédéric Beigbeder. This same year, he ventured in drama for the first time on the silver screen, playing a tortured father and cop in Franck Mancuso's Contre-enquête. In 2009, he appeared in A Man and His Dog alongside screen legend Jean-Paul Belmondo, with whom he has often been compared. In 2010, he starred alongside Albert Dupontel, playing his character's cancer in The Clink of Ice, a French black comedy written and directed by Bertrand Blier.

In 2011, Dujardin starred as movie star George Valentin in the silent film The Artist, reuniting him with OSS 117: Cairo, Nest of Spies director Michel Hazanavicius and his co-star in that film, Bérénice Bejo. The film premiered at the 2011 Cannes Film Festival, where he received the Best Actor Award.[5] His performance garnered much critical acclaim and he received numerous nominations, including the Broadcast Film Critics Association Award for Best Actor and the Screen Actors Guild for Best Actor.

On 15 January 2012, Dujardin won a Golden Globe Award for Best Actor – Motion Picture Musical or Comedy.[6] He later went on to win the Screen Actors Guild for Best Actor, and the BAFTA for Best Actor. He was also nominated for the César award of the best actor but lost it to Omar Sy for his role in the second most ever viewed movie in France Intouchables. Dujardin went on to win the Best Actor award at the 84th Academy Awards.[7] In effect he is the fourth French actor to be nominated for an Oscar and the first to win the Best Actor.[8] He has been described as France's answer to George Clooney.[9] Following his Oscar nomination for his role in The Artist, WME agency signed the actor.[10]

In February 2012, Dujardin appeared in Les Infidèles with co-star and friend Gilles Lellouche. He was invited to join the Academy of Motion Picture Arts and Sciences in June 2012 along with 175 other individuals.[12] In 2013, Dujardin starred in Éric Rochant's Möbius with Cécile de France and Tim Roth.[13]

His second film that year was Martin Scorsese's The Wolf of Wall Street, playing alongside Leonardo DiCaprio, Jonah Hill, Matthew McConaughey, and Kyle Chandler, among others.[14] He appeared in The Monuments Men, directed by George Clooney, and co-starring Clooney, Matt Damon, and Cate Blanchett,[15] and starred in the French film Le Petit Joueur.[16]

In late 2014, Dujardin's most recent film, La French, was released in Europe and subsequently in the United States in early 2015. He plays a French police magistrate who tries to dismantle the French Connection and bring down the Unione Corse.

Dujardin has been married twice and has three children. His first marriage, to Gaëlle, ended in 2003. They have two sons. In 2003, he started dating his on-screen partner Alexandra Lamy of the comedy series Un gars, une fille. They married in Anduze on 25 July 2009. In November 2013, it was announced that the couple had separated.[17]

He is currently in a relationship with French ice dancer Nathalie Péchalat. On June 27, 2015, it was announced that the couple was expecting their first child.[18] In December, 2015, Nathalie Péchalat gave birth to a girl, Jeanne.[19]