Anti-racism includes beliefs, actions, movements, and policies adopted or developed to oppose racism. In general, anti-racism is intended to promote an egalitarian society in which people do not face discrimination on the basis of their race, however defined.

By its nature, anti-racism tends to promote the view that racism in a particular society is both pernicious and socially pervasive, and that particular changes in political, economic, and/or social life are required to eliminate it. 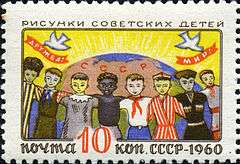 The European discovery of the Americas by Christopher Columbus did not occur until 1492. However, two Papal bulls announced several decades before that event were designed to help ward off increasing Muslim invasions into Europe, which they believed would have an effect on the New World.

When Islam presented a serious military threat to Italy and Central Europe during the mid-15th century around the time of the fall of Constantinople, Pope Nicholas V tried to unite Christendom against them but failed. He then granted Portugal the right to subdue and even enslave Muslims whether white or any other race, pagans and other non-Christians in the papal bull Dum Diversas (1452). While this bull preceded the Atlantic slave trade by several decades, slavery and the slave trade were part of African societies and tribes which supplied the Arab world with slaves long before the arrival of the Europeans.

Increasingly, the Italian merchants from the wealthiest states in Italy, especially Genoa and Venice joined in the lucrative trade and some members sported exotic lackeys and few domestic or workshop slaves whereas before slavery was forbidden in Christendom and only formerly in Muslim Spain and Sicily and their buffer border marches were seen and legally allowed. Racial views of Superiority started developing and became more acute about these slaves, social views imported from the Court of Granada where they were highly stratified and classified.

The following year saw the Fall of Constantinople to Muslim conquerors of the ever growing Ottoman Empire which left the pope as the undoubted contested leader of Christendom when the Orthodox Church leadership became under submission. Several decades later, European explorers and missionaries spread Christianity to the Americas, Asia, Africa and Oceania. Pope Alexander VI had awarded colonial rights over most of the newly discovered lands by the Iberian Kingdoms of Castile and Portugal. Under their patronato system, however, Royal authorities, not the Vatican, controlled as in Europe all clerical appointments in the new colonies. Thus, the 1455 Papal bull Romanus Pontifex granted the Portuguese all lands behind Cape Bojador "allowing to reduce pagans and other enemies of Christ to perpetual servitude." Later, the 1481 Papal bull Aeterni regis granted all lands south of the Canary Islands to the Portuguese Empire, while in May 1493 the Aragonese-born Pope Alexander VI decreed in the Bull Inter caetera that all lands west of a meridian only 100 leagues west of the Cape Verde Islands should belong to the Spanish Empire while new lands discovered east of that line would belong to Portugal. These arrangements were later confirmed in the 1494 Treaty of Tordesillas.

The European origins of racism spread to the Americas alongside the Europeans, but establishment views were questioned when applied to indigenous peoples. After the discovery of the New World many of the clergy sent to the New World, educated in the new Humane values of the Renaissance blooming but still new in Europe and not ratified by the Vatican, began to criticize Spain and their own Church's treatment and views of indigenous peoples and slaves.

In December 1511, Antonio de Montesinos, a Dominican friar, was the first man to openly rebuke the Spanish authorities and administrators of Hispaniola for their "cruelty and tyranny" in dealing with the American natives and those forced to labor as slaves. King Ferdinand enacted the Laws of Burgos and Valladolid in response. However enforcement was lax, and the New Laws of 1542 have to be made to take a stronger line. Because some people like Fray Bartolomé de las Casas questioned not only the Crown but the Papacy at the Valladolid Controversy whether the Indians were truly men who deserved baptism, Pope Paul III in the papal bull Veritas Ipsa or Sublimis Deus (1537) confirmed that the Indians and other races were deserving men, so long as they became baptized.[1][2] Afterward, their Christian conversion effort gained momentum along social rights, while leaving the same status recognition unanswered for Africans of Black Race, and legal social racism prevailed towards the Indians or Asians. However, by then the last schism of the Reformation had taken place in Europe in those few decades along political lines, and the different views on the Value of human lives of different races were not corrected in the lands of Northern Europe, which would join the Colonial race at the end of the century and over the next, as the Portuguese and Spanish Empires waned. It would take another century, with the influence of the French Empire at its height, and its consequent Enlightenment developed at the highest circles of its Court, to return these previously inconclusive issues to the forefront of the political discourse championed by many intellectual men since Rousseau. These issues gradually permeated to the lower social levels, where they were a reality lived by men and women of different races from the European racial majority. 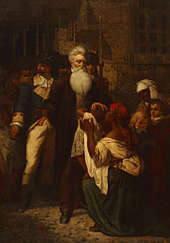 Prior to the American Revolution, a small group of Quakers including John Woolman and Anthony Benezet successfully persuaded their fellow members of the Religious Society of Friends to free their slaves, divest from the slave trade, and create unified Quaker policies against slavery. This afforded their tiny religious denomination some moral authority to help begin the Abolitionist movement on both sides of the Atlantic. Woolman died of smallpox in England in 1775, shortly after crossing the Atlantic to bring his anti-slavery message to the Quakers of the British Isles.

During and after the American Revolution, Quaker ministrations and preachings against slavery began to spread beyond their movement. In 1783, 300 Quakers, chiefly from the London area, presented the British Parliament with their signatures on the first petition against the slave trade. In 1785, Englishman Thomas Clarkson, enrolled at Cambridge, and in the course of writing an essay in Latin (Anne liceat invitos in servitutem dare (Is it lawful to enslave the unconsenting?), read the works of Benezet, and began a lifelong effort to outlaw the slave trade in England. In 1787, sympathizers formed the Committee for the Abolition of the Slave Trade, a small non-denominational group that could lobby more successfully by incorporating Anglicans, who, unlike the Quakers, could lawfully sit in Parliament. The twelve founding members included nine Quakers, and three pioneering Anglicans: Granville Sharp, Thomas Clarkson, and William Wilberforce — all evangelical Christians.

Later successes in opposing racism were won by the abolitionist movement, both in England and the United States. Though many Abolitionists did not regard blacks or mulattos as equal to whites, they did in general believe in freedom and often even equality of treatment for all people. A few, like John Brown, went further. Brown was willing to die on behalf of, as he said, "millions in this slave country whose rights are disregarded by wicked, cruel, and unjust enactments ..." Many black Abolitionists, such as Frederick Douglass, explicitly argued for the humanity of blacks and mulattoes, and for the equality of all people.

Prior to and during the American Civil War, racial egalitarianism in the North became much stronger and more generally disseminated. The success of black troops in the Union Army had a dramatic impact on Northern sentiment. The Emancipation Proclamation was a notable example of this shift in political attitudes, although it notably did not completely extinguish legal slavery in several states. After the war, the Reconstruction government passed the Fourteenth Amendment and Fifteenth Amendments to the Constitution to guarantee the rights of blacks and mulattoes. Many ex-slaves had access to education for the first time. Blacks and mulattoes were also allowed to vote, which meant that African-Americans were elected to Congress in numbers not equaled until the Voting Rights Act and the Warren Court helped re-enfranchise black Americans.

Due to resistance in the South, however, and a general collapse of idealism in the North, Reconstruction ended, and gave way to the nadir of American race relations. The period from about 1890 to 1920 saw the re-establishment of Jim Crow laws. President Woodrow Wilson, who regarded Reconstruction as a disaster, segregated the federal government.[3] The Ku Klux Klan grew to its greatest peak of popularity and strength. D. W. Griffith's The Birth of a Nation was a movie sensation.

In 1911 the First Universal Races Congress met in London, at which distinguished speakers from many countries for four days discussed race problems and ways to improve interracial relations.[4]

Friedrich Tiedemann was one of the first people scientifically to contest racism. In 1836, using craniometric and brain measurements (taken by him from Europeans and black people from different parts of the world), he refuted the belief of many contemporary naturalists and anatomists that black people have smaller brains and are thus intellectually inferior to white people, saying it was scientifically unfounded and based merely on the prejudiced opinions of travelers and explorers.[5]

At the start of the 20th Century, the work of anthropologists trying to end the paradigms of cultural evolutionism and social Darwinism within social sciences—anthropologists like Franz Boas, Marcel Mauss, Bronisław Malinowski, Pierre Clastres and Claude Lévi-Strauss—began the initiative to the end of racism in human sciences and establish cultural relativism as the new dominant paradigm.

Although the proposal received a majority (11 out of 16) of votes, the chairman, U.S. President Woodrow Wilson, overturned it saying that important issues should be unanimously approved. Billy Hughes[6] and Joseph Cook vigorously opposed it as it undermined the White Australia policy.

Revival in the United States

Opposition to racism revived in the 1920s and 1930s. At that time, anthropologists such as Franz Boas, Ruth Benedict, Margaret Mead, and Ashley Montagu argued for the equality of humans across races and cultures. Eleanor Roosevelt was a very visible advocate for minority rights during this period. Anti-capitalist organizations like the Industrial Workers of the World, which gained popularity during 1905–1926, were explicitly egalitarian.

Beginning with the Harlem Renaissance and continuing into the 1960s, many African-American writers argued forcefully against racism.

During the U.S. Civil Rights Movement, Jim Crow laws were repealed in the South and blacks finally re-won the right to vote in Southern states. Dr. Martin Luther King Jr. was an influential force, and his "I Have a Dream" speech is an exemplary condensation of his egalitarian ideology. 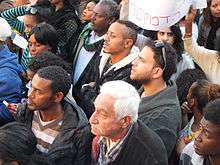 Crowd rallying at a demonstration in Israel against manifestations of racism and discrimination.

Egalitarianism has been a catalyst for feminism, anti-war, and anti-imperialist movements. Henry David Thoreau's opposition to the Mexican–American War, for example, was based in part on his fear that the U.S. was using the war as an excuse to expand American slavery into new territories. Thoreau's response was chronicled in his famous essay "Civil Disobedience", which in turn helped ignite Gandhi's successful campaign against the British in India. Gandhi's example in turn inspired the American civil rights movement.

As James Loewen notes in Lies My Teacher Told Me: "Throughout the world, from Africa to Northern Ireland, movements of oppressed people continue to use tactics and words borrowed from our abolitionist and civil rights movements." In East Germany, revolutionary Iran, Tiananmen Square, and South Africa, images, words, and tactics developed by human rights supporters have been used regularly and repeatedly.

Many of these uses have been controversial. For example, the pro-life movement often draws connections between its goals and the goals of abolitionism. In Zimbabwe, Robert Mugabe has used anti-racist rhetoric to promote a land distribution scheme whereby privately-held land is confiscated from white Rhodesians and distributed to blacks, which has resulted in widespread starvation (see Land reform in Zimbabwe).[7][8][9]