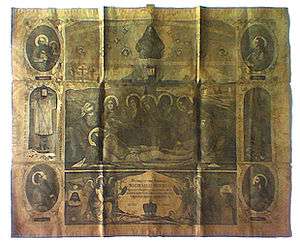 The Antimins (from the Greek Ἀντιμήνσιον, Antimension: "instead of the table"), is one of the most important furnishings of the altar in many Eastern Christian liturgical traditions. It is a rectangular piece of cloth of either linen or silk, typically decorated with representations of the Descent of Christ from the Cross, the Four Evangelists, and inscriptions related to the Passion. A small relic of a martyr is sewn into it.

It is not permitted to celebrate the Eucharist without an antimins. The antimins is kept in the centre of the Holy Table (altar) and is unfolded only during the Divine Liturgy, before the Anaphora. At the end of the Liturgy, the antimins is folded in thirds, and then in thirds again, so that when it is unfolded the creases form a cross (see photo, right). When folded, the antimins sits in the centre of another, slightly larger cloth called the eileton (Greek: Εἰλητόν; Slavonic: Ilitón)—similar to the Western corporal, except it is usually red in colour—which is then folded around it in the same manner (3 x 3), encasing it completely. A flattened natural sponge is also kept inside the antimins, which is used to collect any crumbs which might fall onto the Holy Table. When the antimins and eileton are folded, the Gospel Book is laid on top of them.

The antimins must be consecrated and signed by a bishop. The antimins, together with the chrism remain the property of the bishop, and are the means by which a bishop indicates his permission for the Holy Mysteries (Sacraments) to be celebrated in his absence. It is, in effect, a church's licence to hold divine services; were a bishop to withdraw his permission to serve the Mysteries, he would do so by taking the antimins and chrism back. Whenever a bishop visits a church or monastery under his jurisdiction, he will enter the altar (sanctuary) and inspect the antimins to be sure that it has been properly cared for, and that it is in fact the one that he issued.

Besides the bishop, no one is allowed to touch an antimins except a priest or deacon, and because it is a consecrated object, they should be vested when they do so—the deacon should be fully vested, and the priest should vest in at least the epitrachil (stole) and epimanikia (cuffs). 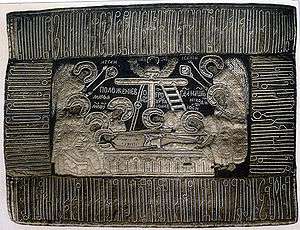 At the Divine Liturgy, during the Ektenias (Litanies) that precede the Great Entrance, the eileton is opened fully and the antimins is opened three-quarters of the way, leaving the top portion folded. Then, during the Ektenia of the Catechumens, when the deacon says, "That He (God) may reveal unto them (the catechumens) the Gospel of righteousness," the priest unfolds the last portion of the antimins, revealing the mystery of Christ's death and resurrection. After the Entrance, the chalice and diskos are placed on the antimins and the Gifts (bread and wine) are consecrated. The antimins remains unfolded until after all have received Holy Communion and the chalice and diskos are taken back to the Prothesis (Table of Oblation). The deacon (or, if there is no deacon, the priest) must very carefully inspect the antimins to be sure there are no crumbs left on it, and then it is folded up, the eileton is folded, and the Gospel Book placed on top of it.

A wooden tablet, the ţablîtho, is the liturgical equivalent of the antimins in the churches of Syriac tradition. However, it is no longer used by the Antiochian Orthodox Church (which follows the liturgical practice of Constantinople, and thus uses the antimins) or the Assyrian Church of the East and Chaldean Catholic Church.

In the Ethiopian Tawahedo Church, the tâbot is functionally similar to the tablitho. However, this word is also used in the Ge'ez language to describe the Ark of the Covenant. The Ark is symbolically represented by the manbara tâbôt ('throne of the Ark'), a casket that sits on the altar.

In the Coptic Orthodox tradition, a wooden tablet, the maqta‘ or al-lawh al-khashab, is the liturgical equivalent of the antimins in contemporary usage. Usually it is decorated with a cross and bears letters in Coptic which signify "Jesus Christ Son of God" in the four squares between the arms of the cross.