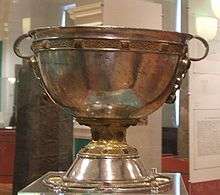 A chalice (from Latin calix, mug, borrowed from Greek kalyx, shell, husk) is a goblet or footed cup intended to hold a drink. In general religious terms, it is intended for drinking during a ceremony. 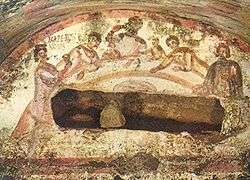 Fresco of a female figure holding a chalice at an early Christian Agape feast. Catacomb of Saints Marcellinus and Peter, Via Labicana, Rome. 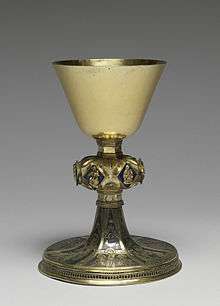 Chalice with Saints and Scenes from the Life of Christ 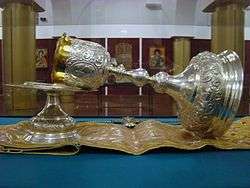 Silver chalice in the museum of the Romanian Orthodox Archbishopy of the Vad, Feleac, and Cluj

In Roman Catholicism, Eastern Orthodox Church, Oriental Orthodoxy, Anglicanism, Lutheranism and some other Christian denominations, a chalice is a standing cup used to hold sacramental wine during the Eucharist (also called the Lord's Supper or Holy Communion). Chalices are often made of precious metal, and they are sometimes richly enamelled and jewelled. The gold goblet was symbolic for family and tradition.

The ancient Roman calix was a drinking vessel consisting of a bowl fixed atop a stand, and was in common use at banquets. Chalices have been used since the early church. Because of Jesus' command to his disciples to "Do this in remembrance of me." (Luke 22:19), and Paul's account of the Eucharistic rite in 1 Corinthians 11:24-25, the celebration of the Eucharist became central to Christian liturgy. Naturally, the vessels used in this important act of worship were highly decorated and treated with great respect. A number of early examples of chalices have a large bowl and two handles. Over time, the size of the bowl diminished and the base became larger for better stability. Over time, official church regulations dictated the construction, blessing, and treatment of chalices. Some religious traditions still require that the chalice, at least on the inside of the cup, be made of gold.[1]

In Western Christianity, chalices will often have a pommel or node where the stem meets the cup to make the elevation easier. In Roman Catholicism, chalices tend to be tulip-shaped, and the cups are quite narrow. Roman Catholic priests will often receive chalices from members of their families when first ordained.

In Eastern Christianity (Oriental Orthodox, Eastern Orthodox and Eastern Catholic churches), chalices will often have icons enameled or engraved on them, as well as a cross. In Orthodoxy and Eastern Catholicism, all communicants receive both the Body of Christ and the Blood of Christ. To accomplish this, a portion of the Lamb (Host) is placed in the chalice, and then the faithful receive Communion on a spoon. For this reason, eastern chalices tend to have larger, rounded cups. In the Russian Orthodox Church, the faithful will often kiss the "foot" (base) of the chalice after receiving Holy Communion. In other traditions, they will kiss the cup. Although Orthodox monks are not permitted to hold personal possessions, the canons permit a hieromonk (i.e., a monk who has been ordained to the priesthood) to keep a chalice and other vessels necessary to celebrate the Divine Liturgy.

In the early and medieval church, when a deacon was ordained, he would be handed a chalice during the service as a sign of his ministry. Early written accounts of the ordination of deaconesses also reflect this practice. In the West the deacon carries the chalice to the altar at the offertory; in the East, the priest carries the chalice and the deacon carries the paten (diskos). Only wine, water and a portion of the Host are permitted to be placed in the chalice, and it may not be used for any profane purpose.

The chalice is considered to be one of the most sacred vessels in Christian liturgical worship, and it is often blessed before use. In the Roman Catholic Church, and some Anglo-Catholic churches, it was the custom for a chalice to be consecrated by being anointed with chrism, and this consecration could only be performed by a bishop or abbot (only for use within his own monastery).[2] Among the Eastern Churches there are varying practices regarding blessing. In some traditions the very act of celebrating the Sacred Mysteries (Sacrament) is the only blessing necessary; in others, there is a special rite of blessing. In some Eastern traditions this blessing may be done only by a bishop, in some it may be done by a priest. In any case, in both the East and the West, once a chalice has been blessed, it may only be touched by an ordained member of the higher clergy (bishop, priest or deacon). In the Russian Orthodox Church a subdeacon is permitted to touch the holy vessels, but only if they are wrapped in cloth. 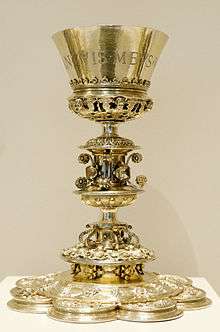 Chalice with the inscription: 'My blood truly is a libation' (John 6:55, KJV), made for the church St John the Baptist in Salinas, Spain.
Main article: Holy Chalice

In Christian tradition the Holy Chalice is the vessel which Jesus used at the Last Supper to serve the wine. New Testament texts make no mention of the cup except within the context of the Last Supper and give no significance whatever to the object itself. Herbert Thurston in the Catholic Encyclopedia 1908 concluded that "No reliable tradition has been preserved to us regarding the vessel used by Christ at the Last Supper. In the sixth and seventh centuries pilgrims to Jerusalem were led to believe that the actual chalice was still venerated in the church of the Holy Sepulchre, having within it the sponge which was presented to Our Saviour on Calvary." Several surviving standing cups of precious materials are identified in local traditions as the Chalice.

An entirely different and pervasive tradition concerns the cup of the Last Supper. In this highly muddled though better-known version, the vessel is known as the Holy Grail. In this legend, Jesus used the cup at the Last Supper to institute the Mass. Other stories claim that Joseph of Arimathea used the cup to collect and store the blood of Christ at the Crucifixion.

In Wicca, a chalice, as a feminine principle, is often used in combination with the Athame (ceremonial black-handled knife), as male principle. Combining the two evokes the act of procreation, as a symbol of universal creativity. This is a symbol of the Great Rite in Wiccan rituals. A chalice is also used in the Small Rite.

Some forms of Neo-Paganism make use of chalices in their rituals as well. A chalice may be placed on an altar or on the ground. The chalice may contain wine, whiskey, water, or other liquids.

Rastafaris engage in an activity called reasoning. This reasoning helps them shape attitudes towards "politics, theology, repatriation, and reparation." Participants discuss personal issues, but the focus is on the interaction of individuals and society, as well as issues such as ecology.

Such sessions include supervised use of ganja intended to put participants in touch with peaceful feelings, unity, and "consciousness." Rasta philosophy describes ganja-conscious humans "as the temple of God, within which God dwells." Using ganja is said to "stimulate this inner being through spiritual discourse."

In these sessions, ganja is smoked in joints or in a chalice (Waterpipe or bong), although Rasta witnesses said chalice smokers had to be very "mature and clean-spirited" due to the powerful hits delivered by this unique and potent form of inhalation device.

The term "poisoned chalice" is applied to a thing or situation which appears to be good when it is received or experienced by someone, but then becomes or is found to be bad. The idea was referred to by Benedict of Nursia in one of his exorcisms, found on the Saint Benedict Medal: Vade retro Satana! Nunquam suade mihi vana! Sunt mala quae libas. Ipse venena bibas! (Begone Satan! Never tempt me with your vanities! What you offer me is evil. Drink the poison yourself!). William Shakespeare uses the expression in Act I Scene VII of Macbeth. It occurs in the opening soliloquy of the scene when Macbeth is considering the ramifications of the murder he is plotting.

But in these cases
We still have judgment here; that we but teach
Bloody instructions, which, being taught, return
To plague the inventor: this even-handed justice
Commends the ingredients of our poison'd chalice
To our own lips.

It's also a term to describe coaching a sports team with a history of winning championships, one feels lucky to manage such a club but then ends up under pressure to win a championship, get a great result within the first year, or they're fired. (For example, teams like Real Madrid, Chelsea and Barcelona or Moyes at Manchester United, where managers have to win a tournament, a league trophy, qualify for Europe, or they're fired within their first year or any year they win nothing.)

The use of chalices as heraldic devices is not unusual, especially in ecclesiastical heraldry. A number of cities and regions also make use of the chalice. For instance, the coat of arms of the municipality of Fanas in the district of Prättigau/Davos in the Swiss canton of Graubünden bears a gold chalice on a solid blue background.

In French-Canadian culture, particularly in and around Quebec, the use of the names of holy objects such as "câlice" (a variation of calice, which is the French word for chalice) can be an alternate form of cursing. Somewhat equivalent to the American word "goddam" or the phrase "God damn it", the use of "câlice" or "tabarnak" (a variation of tabernacle) as an interjection is not uncommon in Quebec. For example: "Câlice! I forgot to lock the front door" or muttering "tabarnak" under your breath after you get a flat tire. Presumably a derivation of "taking the Lord's name in vain".[7]

In Serbo-Croatian, it has coined the word šalica, which means a glass cup.