This article is about the Rijksmuseum in Amsterdam. For other national museums in the Netherlands, see List of Rijksmuseums.

The Rijksmuseum (Dutch pronunciation: [ˈrɛiksmyˌzeːjʏm]; English: National Museum) is a Dutch national museum dedicated to arts and history in Amsterdam. The museum is located at the Museum Square in the borough Amsterdam South, close to the Van Gogh Museum, the Stedelijk Museum Amsterdam, and the Concertgebouw.[9]

The Rijksmuseum was founded in The Hague in 1800 and moved to Amsterdam in 1808, where it was first located in the Royal Palace and later in the Trippenhuis.[1] The current main building was designed by Pierre Cuypers and first opened its doors in 1885.[3] On 13 April 2013, after a ten-year renovation which cost € 375 million, the main building was reopened by Queen Beatrix.[10][11][12] In 2013 and 2014, it was the most visited museum in the Netherlands with record numbers of 2.2 million and 2.45 million visitors.[5][13] It is also the largest art museum in the country.

The museum has on display 8,000 objects of art and history, from their total collection of 1 million objects from the years 1200–2000, among which are some masterpieces by Rembrandt, Frans Hals, and Johannes Vermeer. The museum also has a small Asian collection, which is on display in the Asian pavilion.[3] 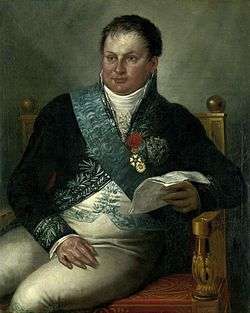 In 1795, the Batavian Republic was proclaimed. The Minister of Finance Isaac Gogel argued that a national museum, following the French example of The Louvre, would serve the national interest. On 19 November 1798, the government decided to found the museum.[1][14]

On 31 May 1800, the National Art Gallery (Dutch: Nationale Kunst-Galerij), precursor of the Rijksmuseum, opened its doors in Huis ten Bosch in The Hague. The museum exhibited around 200 paintings and historic objects from the collections of the Dutch stadtholders.[1][14]

In 1805, the National Art Gallery moved within The Hague to the Buitenhof.[1]

In 1806, the Kingdom of Holland was established by Napoleon Bonaparte. On the orders of king Louis Bonaparte, brother of Napoleon, the museum moved to Amsterdam in 1808. The paintings owned by that city, such as The Night Watch by Rembrandt, became part of the collection. In 1809, the museum opened its doors in the Royal Palace in Amsterdam.[1]

In 1863, there was a design contest for a new building for the Rijksmuseum, but none of the submissions was considered to be of sufficient quality. Pierre Cuypers also participated in the contest and his submission reached the second place.[15]

In 1876 a new contest was held and this time Pierre Cuypers won. The design was a combination of gothic and renaissance elements. The construction began on 1 October 1876. On both the inside and the outside, the building was richly decorated with references to Dutch art history. Another contest was held for these decorations. The winners were B. van Hove and J.F. Vermeylen for the sculptures, G. Sturm for the tile tableaus and painting and W.F. Dixon for the stained glass. The museum was opened at its new location on 13 July 1885.[15]

In 1890 a new building was added a short distance to the south-west of the Rijksmuseum. As the building was made out of fragments of demolished buildings, that together give an overview of the history of Dutch architecture, it has come to be known informally as the 'fragment building'. It is also known as the 'south wing', and is currently (in 2013) branded the Philips Wing. 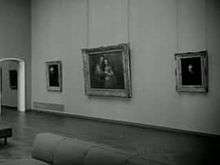 In 1906 the hall for the Night Watch was rebuilt.[15] In the interior more changes were made, between the 1920s and 1950s most multi-coloured wall decorations were painted over. In the 1960s exposition rooms and several floors were built into the two courtyards. The building had some minor renovations and restorations in 1984, 1995–1996 and 2000.[16]

A renovation of the south wing of the museum, also known as the 'fragment building' or 'Philips Wing', was completed in 1996, the same year that the museum held its first major photography exhibition featuring its extensive collection of 19th-century photos.[17] 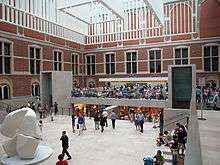 The atrium after the renovation in 2013

In December 2003, the main building of the museum closed for a major renovation. During this renovation, about 400 objects from the collection were on display in the 'fragment building', including Rembrandt's The Night Watch and other 17th-century masterpieces.[18]

The restoration and renovation of the Rijksmuseum are based on a design by Spanish architects Antonio Cruz and Antonio Ortiz. Many of the old interior decorations were restored and the floors in the courtyards were removed. The renovation would have initially taken five years, but was delayed and eventually took almost ten years to complete. The renovation cost € 375 million.[11]

The reconstruction of the building was completed on 16 July 2012. In March 2013 the museum's main pieces of art were moved back from the 'fragment building' (Philips Wing) to the main building. The Night Watch returned to the Night Watch Room, at the end of the Hall of Fame. On 13 April 2013, the main building was reopened by Queen Beatrix.[10] On 1 November 2014 the Philips Wing reopened with the exhibition Modern Times: Photography in the 20th Century. 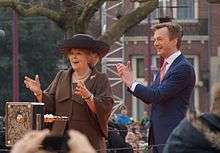 The building of the Rijksmuseum was designed by Pierre Cuypers and opened in 1885. It consists of two squares with an atrium in each centre. In the central axis is a tunnel with the entrances at ground level and the Gallery of Honour at the first floor. The building also contains a library. The fragment building, branded Philips wing, contains building fragments that show the history of architecture in the Netherlands. The Rijksmuseum is a rijksmonument (national heritage site) since 1970[28] and was listed in the Top 100 Dutch heritage sites in 1990. The Asian pavilion was designed by Cruz y Ortiz and opened in 2013.

According to Muriel Huisman, Project Architect for the Rijksmuseum's renovation, "Cruz y Ortiz always like to look for a synergy between old and new, and we try not to explain things with our architecture.” With the Rijks, “there’s no cut between old and new; we’ve tried to merge it. We did this by looking for materials that were true to the original building, resulting in a kind of silent architecture."[29]

The collection of the Rijksmuseum consists of 1 million objects and is dedicated to arts, crafts, and history from the years 1200 to 2000. Around 8000 objects are currently on display in the museum.[3]

The museum also has a small Asian collection which is on display in the Asian pavilion.[3]

It also displays the stern of HMS Royal Charles which was captured in the Raid on the Medway, and the Hartog plate.

In 2012[30] the museum took the unusual step of making some 125,000 high-resolution images available for download via its Rijksstudio webplatform,[31] with plans to add another 40,000 images per year until the entire collection of one million works is available, according to Taco Dibbits, director of collections.[32][33]

The library in the Rijksmuseum

The Rijksmuseum Research Library is part of the Rijksmuseum, and is the best and the largest public art history research library in The Netherlands.