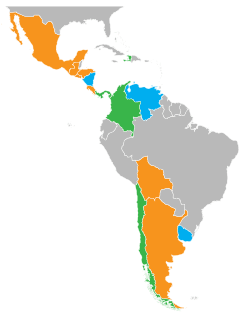 The Apertura [aperˈtuɾa] and Clausura [klawˈsuɾa] tournaments are a relatively recent innovation for many Latin American football leagues in which the traditional association football season from August to May is divided in two sections per season, each with its own champion. Apertura and Clausura are the Spanish words for "opening" and "closing". In French-speaking Haiti, these are known as the Ouverture and the Fermeture, while in English-speaking Belize, they are respectively the "Opening" and "Closing" seasons. The North American Soccer League (NASL), the second-level league in both the United States and Canada, adopted a split season in 2013; the season is divided into a "Spring Championship" and "Fall Championship".

The words Apertura and Clausura are used in most Latin American countries. Some, however, use different terminology:

In most leagues, each tournament constitutes a national championship in itself. On the other hand, in the leagues of Nicaragua, Peru, Uruguay and Venezuela, the winners of the Apertura and Clausura play each other in a playoff for the season title, or there is a final stage where teams qualify based on placements in the Apertura and Clausura. Thus, two championship titles are awarded per year in the first group of leagues, and only one in the second. In Mexico and Colombia, for instance, the winners of each tournament play each other at the beginning of the following season for another title, but this is a rather minor season curtain-raiser, akin to national Super Cups in European leagues. Some Apertura and Clausura tournaments also have second stages to decide the winner.

Peru abolished its Apertura and Clausura format after the 2008 season but brought it back for the 2014 season. Ecuador adopted the Apertura and Clausura in 2005 featuring two champions in the season, however, its subsequent tournaments renamed the Apertura and Clausura as first and second stages, respectively, with the top placed teams advancing to a third stage to determine the champion and international qualification. Starting in 2009, the Ecuadorian championships were decided by a final between stage or group winners, mainting the half-year tournament format. Argentine Football Association (AFA) president Julio Grondona proposed in December 2008 the return to a single championship per season format,[1] and at the conclusion of the 2014 Primera season this happened, with the 2015 season taking a European style year long season from February to December. The AFA later decided to change its season to one spanning two calendar years; as such, the 2016 season is an abbreviated tournament held from February to May, followed by an August-to-June season from 2016–17 forward.

The Premier League of Belize, created in 2012 by the merger of two rival top-level leagues, began a split season in 2012–13. The Opening Season takes place in the second half of the calendar year, with the Closing Season following in the first half of the next calendar year. Like most Latin American leagues, it crowns two separate champions in each season. However, its format is significantly different from that of most other leagues, being more similar to the system used by Major League Soccer in the United States and Canada.

In the first split season (2012–13), the league's 12 teams were divided into two six-team zones. During the first half of the season, every team played a double round-robin within its zone, plus single games against four teams from the opposite zone, resulting in a 14-game schedule. The top two teams from each zone qualified for a playoff round, with the top team from each zone matched against the second-place team from the other zone in the two-legged semifinals. The semifinal winners advanced to a two-legged final. In the second half of the season, only eight of the initial 12 teams competed; all teams played a double round-robin in that half of the season, followed by a four-team knockout playoff (again two-legged throughout).

The number of teams participating in the top flight dropped to seven for the 2013–14 season. Each half of that season will have the same format as the 2013 Closing Season.

The Brazilian national league is a notable tournament in Latin America not to split the season into two parts, using a single-season double round-robin format to decide the champions, similar to those in European leagues, though played between May and December. Brazilian clubs also participate in the state leagues from January to April. Brazil also has, unlike most Latin American nations, a national cup.

The NASL adopted a split-season format in 2013, divided into Spring and Fall Championships. Following the traditional standard for the US and Canada, the season is entirely contained within a calendar year. It follows a format more similar to that of Nicaragua, Peru, Uruguay and Venezuela—each part of the season is conducted in a double round-robin format, with the winner of each part of the season advancing to a championship final known as the Soccer Bowl.

In Belgium a large reform of the Belgian football league system was performed in 2016, which reduced the number of professional teams to 24, with only 8 teams remaining at the second level, called Belgian First Division B. From the 2016–17 season, the 8 teams will play two tournaments, with the winners of both tournaments playing a two-legged playoff to determine the overall champion.

Apertura and Clausura by country

In baseball, the Double-A Southern and Texas Leagues in the United States both use a similar system, dividing the March–October regular season in half, with records being cleared mid-season, and the top teams mid-season and at the end of the season clinching spots in the playoff for the league pennant (the remainder of playoff slots being filled by wild cards). This system is used in some Single-A leagues, as well. The March–September Chinese Professional Baseball League and Mexican Pacific League also follow the same structure, using a team's win record in each stage to determine which advance to the playoffs.

While Little League Baseball does not mandate any specific scheduling format to be used by local leagues, it recommends dividing the regular season in half and having the first-half winner play against the second-half winner at the end of the season for the championship.[4]

The Philippine Basketball Association also conducts a split season similar in many ways to the Apertura and Clausura.