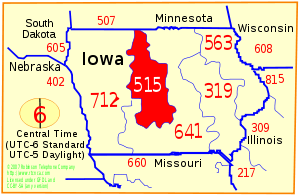 Despite its relatively modest population, Iowa was originally divided into three area codes running vertically the full length of the state. One factor may have been the need to improve routing of calls to and from neighboring states. Greater efficiency has since been achieved with highly computerized exchanges that weren't available in the 1950s.

515 originally covered the central third of the state, stretching border to border from Minnesota to Missouri. In 2000, the eastern and southern portions of 515 were split off as area code 641. Today the 515 area code covers only about one-fourth of its original area, including Des Moines and areas northwest of there. Only one portion of the area code borders another state, a tiny portion of the north that borders Minnesota.

The metal band Slipknot named one of their songs "515" because the band is from Des Moines.