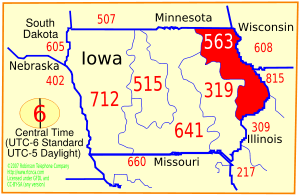 Area code 563 is a telephone area code for the east central and northeast corner of the state of Iowa, and includes most of the Iowa side of the Quad Cities. The 563 area code was split off from the Area code 319 in 2001, becoming active on March 25, 2001, and finally becoming mandatory on December 2, 2001.

Prior to the implementation of the code, there was debate over whether the 563 code should have been implemented as a split, or overlaid over the existing 319 code. Mobile phone providers were in favor of the overlay, as it would mean that existing cell phones would not have to be reprogrammed, However, since overlays were still a new concept that met with considerable public resistance (due to requirements for 10-digit dialing and mixing of area codes in the same area), it was ultimately decided to use a geographical split instead.

Cities in the 563 area code