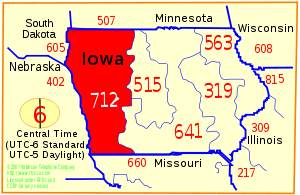 Area code 712 was one of Iowa's original three area codes, and is the only one that still has its original boundaries. It is one of the few remaining original area codes (not counting those covering an entire state) that has never been split or overlaid with a new area code. Despite the proliferation of cell phones and pagers (particularly in Sioux City and Council Bluffs), it is currently projected to stay that way until at least 2028.