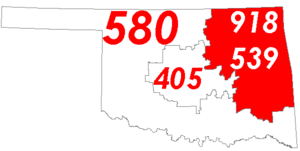 The other two area codes for Oklahoma are 405, which covers the Oklahoma City Metropolitan Area and central Oklahoma, and 580, which covers western and southern Oklahoma.

Towns and cities served by these area codes

Below is a full list of all towns and cities covered by the 539 and 918 area codes.