The Argentine general election of 1951, the first to have enfranchised women at the national level, was held on 11 November. Voters chose both the President of Argentina and their legislators and with a turnout of 88.0%, it produced the following results:

President Juan Perón (1895-1974) had become President for the first time in June 1946 (see Argentine general election, 1946). His popularity was riding high following five years of populist social reforms and a vigorous public works program, faced intensifying opposition during 1951. His decision to expropriate the conservative La Prensa (then the nation's second-most circulated daily), though lauded by the CGT labor union, damaged his standing elsewhere at home and his reputation in the World, as did the climate of political liberties: the opposition UCR's nominee, Congressman Ricardo Balbín, had spent much of the previous year as a political prisoner, to name one of many such examples. Economically, the year was an improvement over the 1949-50 recession and saw the completion of a number of landmark public works and the inaugural of Channel 13 (Public Television), the first regular broadcast station in Latin America; but growing inflation (50%, a record at the time) led to increasing strike activity. 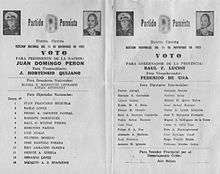 The ailing Eva Perón (right) casts a vote for the "reason of her life," President Juan Perón.

The UCR and other parties in opposition, harassed and deprived of access to the media, boycotted a number of Congressional races and all Senate races, as well. The vice president, Hortensio Quijano, had requested leave from the campaign due to failing health and, on August 22, the CGT organized a rally on Buenos Aires' massive Ninth of July Avenue in support of the influential first lady Eva Perón as her husband's running mate, though unbeknownst to the crowd, the popular Evita was, like Quijano, dying, and thus refused the acclamation. Quijano reluctantly stayed on; but her stepping aside did not prevent a September 28 coup attempt against Perón on the part of ultraconservative elements in the Army. Ultimately, these ill-considered attacks, the Peróns' popularity and their control of much of the media combined to give the Peronist Party a landslide in this, the first Argentine national election in which the vote was extended to women.