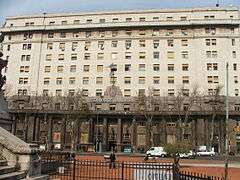 The National Senate was established by the Argentine Confederation on July 29, 1854, pursuant to Articles 46 to 54 of the 1853 Constitution.[1] There are 72 members: three for each province and three for the Autonomous City of Buenos Aires. The number of senators per province was raised from two to three following the 1994 amendment of the Argentine Constitution, and the change took effect following the May 14, 1995, general elections.

Senators are elected to six-year terms by direct election on a provincial basis, with the party with the most votes being awarded two of the province's senate seats and the second-place party receiving the third seat. Historically, Senators were indirectly elected to nine-year terms by each provincial legislature. These provisions were abrogated by a 1994 constitutional amendment, and direct elections to the Senate took effect in 2001. Currently one-third of the members are elected every two years. One-third of the provinces hold senatorial elections every two years; there are no term limits. The Senate is presided over by the Vice President of the Republic, who has the casting vote in the event of ties.

The Senate must obtain quorum to deliberate, this being an absolute majority. It has the power to approve bills passed by the Chamber of Deputies, call for joint sessions with the Lower House or special sessions with experts and interested parties, and submit bills for the president's signature; bills introduced in the Senate must, in turn, be approved by the Lower House for their submittal to the president. The Senate must introduce any changes to federal revenue sharing policies, ratify international treaties, approve changes to constitutional or federal criminal laws, as well as confirm or impeach presidential nominees to the cabinet, the judiciary, the armed forces, and the diplomatic corps, among other federal posts.[2]

There are twenty-four standing committees made up of fifteen members each, namely:[2]

See List of current members of the Argentine Senate