In 2004, the club was Campeonato Alagoano's runner-up. In the final the club was defeated by Corinthians Alagoano. On May 5, Coruripe won the first leg 3–2, but on May 9 the club was defeated 2–0.[3] The club competed in the Campeonato Brasileiro Série C for the first time in that year. Coruripe, however, finished in the third position, being eliminated in that stage. The club finished only ahead of Corinthians Alagoano, but behind of Porto (PE) and Itacuruba.[4]

In 2005, the club was again Campeonato Alagoano's runner-up. The club was defeated by ASA, which won both stages of the competition (the first stage, called Copa Maceió, and the second stage, named Copa Alagoas).[5] Coruripe has also competed in the Copa do Brasil in that year. However, the club was eliminated in the first round by Fortaleza.[6] Coruripe has also competed in that year's Campeonato Brasileiro Série C. The club reached the competition's third stage. In the first stage, the team finished in the first place, ahead of América de Natal, Nacional de Patos and Vitória (PE). In the second stage, Coruripe beat Icasa. In the third stage the club was eliminated by América de Natal.[7] 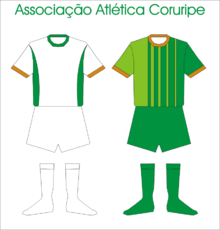 In 2006, Coruripe won the Campeonato Alagoano. In the final the club beat CSA. The club won the first leg 1–0,[8] but was defeated 1–0 in the second leg. In the penalty shootout the club won 6–5.[9] In the same year, the club competed again in the Campeonato Brasileiro Série C, reaching the second stage.[10] In 2007, the club won the state championship again,[11] competing in that season's Copa do Brasil where the club was eliminated in the first stage,[12] and in the Campeonato Brasileiro Série C, reaching the competition's third stage.[13] In 2008, Coruripe was again eliminated in Copa do Brasil's first stage.[14]

The club's home matches are usually played at Gerson Amaral stadium, which has a maximum capacity of 2,000 people.[1]

The club's colors are green, blue and yellow.[1]