In linguistics, a light verb is a verb that has little semantic content of its own and forms a predicate with some additional expression, which is usually a noun.[1] Common verbs in English that can function as light verbs are do, give, have, make, take, etc. Other names for light verb include delexical verb,[2] vector verb, explicator verb, thin verb, empty verb or semantically weak verb (a semantically weak verb is not to be confused with a weak verb of the Germanic weak inflection, however). While light verbs are similar to auxiliary verbs regarding their meaning contribution to the clauses in which they appear, light verbs fail the diagnostics that identify auxiliary verbs and are therefore distinct from auxiliaries.

Light verb constructions[3] challenge theories of compositionality because the words that form such constructions do not together qualify as constituents although the word combinations qualify as catenae.

They did the review of my paper first.
Sam did the cleaning yesterday.

Who got such intense criticism?
Susan is getting much support from her family.

I am going to have a nice nap.
She had a smoke.
We had a slow, boring conversation.

Are you giving a presentation at the conference?
They gave the kids a hard time.
Who will give you a hug?

Who made such a severe mistake?
I made the first request.

Sam has taken a shower.
Why is Larry taking a nap?
We should take a break soon.
Have you taken advantage of that opportunity.
I haven't taken that into consideration.

Many light verb constructions are closely similar in meaning to a corresponding full verb, e.g.

a. Sam did a revision of his paper. - Light verb construction
b. Sam revised his paper. -Full verb

The indices indicate coreference, i.e. the two coindexed words denote the same person. The reflexive pronoun must appear with the light verb, whereas the full verb allows the simple pronoun to appear as well. This distinction has to do with the extent of the predicate. The main predicate reaches down into the noun phrase when the light verb appears, whereas it excludes the noun phrase when the full verb is present.

Light-verb constructions present the same difficulty associated with idiosyncratic expressions of every sort: the meaning is not compositional in a straightforward way. This fact is evident in the examples above, inasmuch as the words that constitute a light-verb construction often do not qualify as a constituent in any sense. These constructions do, however, form catenae (= chains).[4] This fact is illustrated with the following dependency grammar trees: 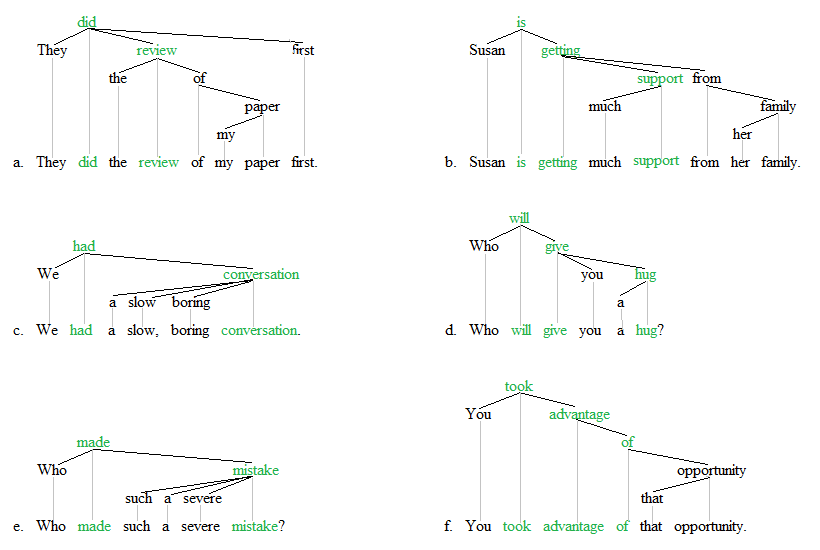 The words of each light-verb construction form a catena. In this regard, the words in green qualify as the main predicate of the clause each time. If an auxiliary verb is present (as in trees b and d), it is included in the main predicate because like the light verb, it contributes functional meaning only.

Light verbs in other languages

Examples in other languages include the Yiddish geb in geb a helf (literally give a help, "help"); the French faire in faire semblant (lit. make seeming, "pretend"); the Hindi nikal paRA (lit. leave fall, "start to leave"); and the bǎ construction in Chinese.[5] Light verbs are extremely common in Indo-Iranian languages, Japanese, and other languages in which verb compounding is a primary mechanism for marking aspectual distinctions. Light verbs are also equivalent to inherent complement verbs [6] [7] in many Kwa languages e.g. jo in jo foi "run" Ga, tu in tu fo "advise" in Akan.

Light verbs are interesting to linguists from a variety of perspectives, including those of diachronic linguistics and computational linguistics. From the diachronic perspective, the light verb is said to have evolved from the "heavy" verb through semantic bleaching, a process in which the verb loses some or all of its original semantics. In this sense, the light verb is often viewed as part of a cline:

In computational linguistics, a serious challenge is that of identifying light verb constructions, which require marking light verbs.