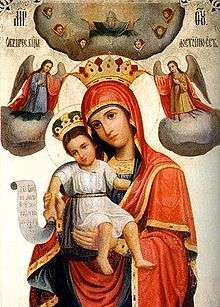 Axion estin (Greek: Ἄξιον ἐστίν, Slavonic: Достóйно éсть, Dostóino yesť), or It is Truly Meet, is a megalynarion and a theotokion, i.e. a magnification[1] of and a Hymn to Mary which is chanted in the Divine Services of the Eastern Orthodox and Eastern Catholic Churches. It is a troparion and a sticheron composed in honor of the Theotokos (i.e. the Virgin Mary). The same name also refers to a style of icon of the Theotokos.

The hymn in Greek is:

One translation of the hymn goes as follows:

It is truly right to bless thee, O Theotokos,thou the ever blessed, and most pure, and the Mother of our God.Thou the more honorable than the cherubim,and beyond compare more glorious than the seraphim,who without corruption gavest birth to God the Word,thou the true Theotokos, we magnify thee.

The second half of the hymn, beginning with the words, "More honorable than the cherubim..." is the older part of the hymn, and is an Irmos attributed to St. Cosmas the Hymnographer († 773). The introduction, "It is truly meet..." was, according to tradition, revealed by the Archangel Gabriel to a monk on Mount Athos.

The hymn is chanted at Matins, Compline, and other services; but its most important occurrence is at the Divine Liturgy, where it is chanted at the conclusion of the Anaphora. The second half of the hymn, "More honorable…" is frequently chanted before the dismissal which concludes services.

Often, the chanting of this hymn is followed by either a metania or a prostration.

Hymns in place of the Axion Estin 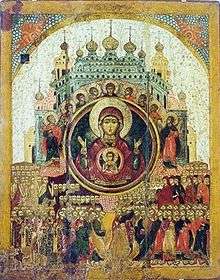 Icon of the Theotokos, "All of Creation Rejoices in Thee."

During the Divine Liturgy, Axion Estin is sometimes replaced by another hymn to the Theotokos. These hymns are referred to in the service books as "in place of Axion Estin" (Slavonic: Задостойнникъ, Zadostoinnik), or by the term "eis to Exairetos", meaning "at the Especially (petition)," from the petition that precedes them calling "especially" for the intercessions of the Theotokos.

At the Liturgy of St. Basil, it has since the 14th century[2] been replaced by the hymn:

On the Great Feasts, it is replaced by the Irmos of the ninth Ode of the Canon of the Feast.

Axion Estin is also the name given to the icon of the Theotokos (Mother of God) before which, according to tradition, the hymn was revealed. It stands in the high place of the altar (sanctuary) of the katholikon (main church) of Karyes on Mount Athos.

According to tradition, an Elder and his disciple lived in a cell on Mount Athos. One Saturday night the Elder left to attend the All-Night Vigil in Karyes. He told his disciple to chant the service alone. That evening an unknown monk who called himself Gabriel, came to the cell, and they began the Vigil together. During the Ninth Ode of the Canon, when they began to sing the Magnificat, the disciple sang the original hymn "More honorable than the Cherubim…" and afterwards the visiting monk chanted it again, but with "It is truly meet…" preceding the original Irmos. As he sang, the icon began to radiate with Uncreated Light. When the disciple asked the visiting monk to write the words of the new hymn down, he took a roof tile and wrote on it with his finger, as though the tile were made of wax. The disciple knew then that this was no ordinary monk, but the Archangel Gabriel. At that moment the Archangel disappeared, but the icon of the Mother of God continued to radiate light for some time afterward.

The Eleousa ("merciful") Icon of the Mother of God, before which the hymn "It Is Truly Meet" was first chanted, was transferred to the katholikon (main church) at Karyes, known as the Protaton. The tile, with the hymn written on it, was taken to Constantinople when St. Nicholas II Chrysoberges was Patriarch (984-996). The hymn became integrated in the Eastern Orthodox worship books and since then it plays an important role in everyday worship, being chanted in the Divine Liturgy of St. John Chrysostom and recited at the Compline.

Since that time the icon has been considered the protector of the Holy Mountain and its holiest object.

The feast day celebrating the revelation of the hymn by the Archangel Gabriel, and the Icon of the Theotokos of the same name, is celebrated on June 11.