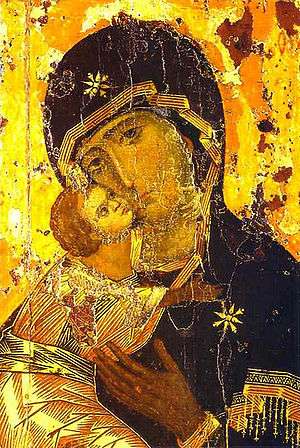 Russian icon of Our Lady of Vladimir.

A Theotokion (Greek: Θεοτοκίον; pl. Greek: Θεοτοκία, translit. Theotokia) is a hymn to Mary the Theotokos (Greek: Θεοτόκος, lit. 'God-bearer'), which is read or chanted (troparion or sticheron) during the Divine Services (Canonical hours and Divine Liturgy) of the Eastern Orthodox and Eastern Catholic churches.

After the defeat of Nestorianism at the First Council of Ephesus in 431, the use of theotokia during the course of the Divine Services gradually increased. The inclusion of Theotokia in every service is sometimes accredited to Peter the Fuller, the monophysite Patriarch of Antioch (471 - 488), an ardent opponent of Nestorianism.[1]

Theotokia are almost part of every service in the Orthodox Church, but there are more specific forms among them. Theotokia often occur at the end of a series of troparia or stichera, usually after the verse: "(Glory to the Father, and to the Son, and to the Holy Spirit,) Both now and ever, and unto the ages of ages. Amen."

A Stavrotheotokion is a hymn to the Theotokos that refers to the Crucifixion of Christ. The correlation between the Theotokos and the Cross is natural because of the Virgin Mary's standing by the Cross throughout the Passion. Stavrotheotokia occurs most commonly on Wednesdays and Fridays, days which are dedicated to the commemoration of the Cross.

The theotokion that occurs at the end of "Lord, I Have Cried" at Vespers is called a Dogmaticon, because its text deals with the mystery of the Incarnation of Christ. The Little Entrance during Vespers is accompanied by the Dogmaticon as a processional troparion. The Dogmaticon is often chanted in a solemn manner, and while the choir is singing it the Deacon or Priest will cense the icon of the Theotokos on the Iconostasis. A Little Entrance is also made during the Divine Liturgy while the choir chants the theotokion that ends the Beatitudes.

Theotokia of all types are found in the Horologion, Octoechos, Triodion, Pentecostarion and other liturgical books.

The longest and most popular devotion involving Theotokia is the Akathist to the Theotokos. This is solemnly chanted on the Fifth Saturday of Great Lent, and many other times during the year as both public and private devotions.