Baldwin spent his youth in his father's court in Jerusalem, having little contact with his mother, Agnes of Courtenay, Countess of Jaffa and Ascalon, and later Lady of Sidon, whom his father had been forced to divorce.[2] Baldwin IV was educated by the historian William of Tyre (later Archbishop of Tyre and Chancellor of the kingdom), who made a disturbing discovery about the prince: he and his friends were playing one day, attempting to injure each other by driving their fingernails into each other's arms, but Baldwin felt no pain. William immediately recognized this as a sign of serious illness, but it was not conclusively identified as leprosy until a few years later; the onset of puberty accelerated his disease, in its most serious lepromatous form.[3] 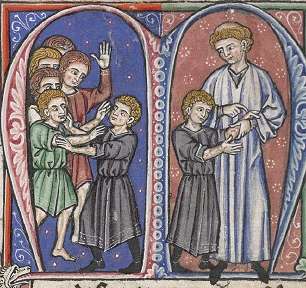 Baldwin's father died in 1174 and the boy was crowned at the age of 13, on 15 July that year. In his minority the kingdom was ruled by two successive regents, first Miles of Plancy, though unofficially, and then Raymond III of Tripoli, his father's cousin. In 1175, Raymond III, the acting king of Jerusalem, made a treaty with Saladin.[4]

As a leper, Baldwin was not expected to reign long or produce an heir, and courtiers and lords positioned themselves for influence over Baldwin's heirs, his sister Sibylla and his half-sister Isabella. Sibylla was being raised by her great-aunt Ioveta in the convent of Bethany, while Isabella was at the court of her mother, the dowager queen Maria Comnena, in Nablus. 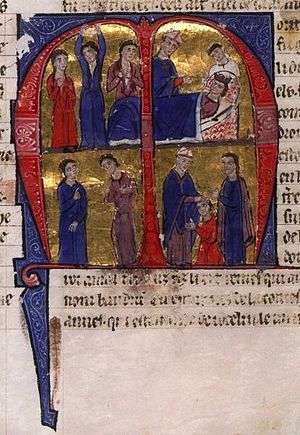 Raymond's regency ended on the second anniversary of Baldwin's coronation: the young king was now of age. He did not ratify Raymond's treaty with Saladin, but instead went raiding towards Damascus and around the Beqaa Valley. He appointed his maternal uncle, Joscelin III, the titular count of Edessa, seneschal after he was ransomed. Joscelin was his closest male relative who did not have a claim to the throne, so he was judged a reliable supporter: indeed, he proved his loyalty.[5]

In his capacity as regent, Raymond of Tripoli had begun negotiations for the marriage of princess Sibylla to William of Montferrat, a first cousin of Louis VII of France and of Frederick I, Holy Roman Emperor. William arrived in early October and became Count of Jaffa and Ascalon upon his marriage.

In 1174, at the young age of 13, Baldwin successfully attacked Damascus in order to draw the Muslim Sultan Saladin away from Aleppo. In 1176 he was leading men in the front in similar attacks at Damascus and Andujar to repel Muslim attacks.[6] Baldwin also planned an attack on Saladin's power-base in Egypt. He sent Raynald of Châtillon (the former prince of Antioch through marriage to Amalric I's cousin Constance of Antioch) to Constantinople as envoy to Manuel I Comnenus, to obtain Byzantine naval support. Raynald had recently been released from captivity in Aleppo: Manuel paid his ransom, since he was the stepfather of the Empress Maria of Antioch. Manuel sought the restoration of the Orthodox patriarchate in the kingdom, and arranged the marriage of Bohemond III of Antioch to his great-niece Theodora Comnena, sister of the queen-dowager Maria. Reynald returned early in 1177, and was rewarded with marriage to Stephanie of Milly, a widowed heiress. This made him lord of Kerak and Oultrejourdain. Baldwin tried to ensure that Reynald and William of Montferrat co-operated on the defence of the South. However, in June, William died at Ascalon after several weeks' illness, leaving the widowed Sibylla pregnant with the future Baldwin V.[7]

In August the king's first cousin, Philip of Flanders, came to Jerusalem on crusade. Philip demanded to wed Baldwin's sisters to his vassals. Philip, as Baldwin's closest male kin on his paternal side (he was Fulk's grandson and thus Baldwin's first cousin; Raymond was Melisende's nephew and thus first cousin of Baldwin's father), claimed authority superseding Raymond's regency. The Haute Cour refused to agree to this, with Baldwin of Ibelin publicly insulting Philip. Offended, Philip left the kingdom, campaigning instead for the Principality of Antioch. The Ibelin family were patrons of the dowager queen Maria, and it is possible that Baldwin of Ibelin acted this way in hopes of marrying one of Baldwin's sisters himself.[8]

In November, Baldwin and Raynald of Châtillon defeated Saladin with the help of the Knights Templar at the celebrated Battle of Montgisard. That same year, Baldwin allowed his stepmother the dowager-queen to marry Balian of Ibelin, a concilatory move to both, but it carried risks, given the Ibelins' ambitions. With Maria's patronage, the Ibelins tried to have the princesses Sibylla and Isabella married into their family as well.

In 1179, the king met with some military setbacks in the north. On 10 April, he led a cattle-raid on Banias, but was surprised by Saladin's nephew Farrukh Shah. Baldwin's horse bolted, and in saving him, the much-respected constable of the kingdom Humphrey II of Toron, was mortally wounded. On 10 June, in response to cavalry raids near Sidon, Baldwin took a force, with Raymond of Tripoli and the Grand Master of the Templars, Odo of St Amand, to Marj Uyun. They defeated the raiders fording the Litani River, but were caught by Saladin's main force. The king (unable to remount unaided) was unhorsed, and had to be carried off the field on the back of another knight as his guard cut their way out. Count Raymond fled to Tyre, and the king's stepfather Reginald of Sidon rescued a number of the fugitives, but the prisoners included the Grand Master, Baldwin of Ibelin, and Hugh of Tiberias, one of Raymond of Tripoli's stepsons. In August, the unfinished castle at Jacob's Ford fell to Saladin after a brief siege, with the slaughter of half its Templar garrison.[9]

Baldwin and Guy of Lusignan

In the summer of 1180, Baldwin IV married Sibylla to Guy of Lusignan, brother of the constable Amalric of Lusignan. Earlier historians claimed that Sibylla's second marriage was entirely due to the influence of the King's mother; however, Hamilton argues that this is to reflect uncritically the personal grievances of William of Tyre and of the Ibelins. A plan to marry Sibylla to Hugh III of Burgundy had broken down; Raymond of Tripoli seems to have been attempting to marry her to Baldwin of Ibelin to bolster his power-base. A foreign match was essential to the kingdom, bringing the possibility of external aid. With the new French king Philip II a minor, Guy's status as a vassal of the King's cousin Henry II of England – who owed the Pope a penitential pilgrimage – was useful in this respect. Baldwin also betrothed his 8-year-old half-sister Isabella to Humphrey IV of Toron, repaying a debt of honour to Humphrey's grandfather, who had given his life for him at Banias, and removing Isabella from the control of her mother and the Ibelin faction (her betrothed was Raynald of Châtillon's stepson).[10]

Guy had previously allied himself with Raynald, who was by now taking advantage of his position at Kerak to harass the trading caravans travelling between Egypt and Damascus. After Saladin retaliated for these attacks in the campaign and Battle of Belvoir Castle in 1182, Baldwin, now blind and unable to walk, appointed Guy regent of the kingdom.[11] By June 1183 however, Saladin had captured Aleppo and completed his encirclement of Jerusalem.[12]

Nevertheless, Baldwin had become offended by Guy's actions as regent. Guy attended the wedding festivities for Isabella (now about 11) and Humphrey, held in Karak; however, the festivities were interrupted by Saladin, who besieged the fortress with the wedding guests inside. Baldwin marshalled what strength he had and lifted the siege, but Guy refused to fight Saladin and Saladin's troops managed to escape. Baldwin could not tolerate this and deposed Guy as regent. In disgrace, Guy retired to Ascalon, taking his wife the princess Sibylla with him.[13] Although Baldwin was almost beyond his prime, his victories in Belvoir castle, Beirut and at Kerak castle, Saladin's campaigns in the Holy Land was delayed until the remainder of Baldwin's reign.[6][14]

Although Baldwin seems to have held no ill-will towards his sister, Baldwin appointed his 5-year-old nephew Baldwin of Montferrat as his heir and successor, with the support of Agnes and her husband Reginald of Sidon, Raymond, and many of the other barons, excluding Sibylla from the succession. Raymond was to act as guardian of the infant heir, and later as regent if Baldwin IV was to expire, but Baldwin IV himself would continue to rule. The child was crowned co-king as Baldwin V on November 20, 1183.[15]

In the early months of 1184 Baldwin attempted to have the marriage between Sibylla and Guy annulled. This was foiled by their holding fast in Ascalon, Guy refusing to attend the annulment proceedings. The military expedition to relieve Karak and the dynastic struggle had weakened Baldwin considerably. He died in Jerusalem in spring 1185, a few months after the death of his mother Agnes in Acre late in 1184. Though often suffering from the effects of leprosy and ruling with regency governments, Baldwin was able to maintain himself as king for much longer than otherwise might have been expected. As had been decided, Baldwin V succeeded his uncle, with Raymond of Tripoli as regent.

Baldwin in art, fiction, and film

Thirteenth- and fourteenth-century manuscript illustrations to the histories of William of Tyre and Ernoul give little indication of Baldwin's illness. He figures in a Romantic depiction of the battle of Montgisard by Charles-Philippe Larivière in the Salles des Croisades at Versailles. This work, which dates from c. 1842, depicts him being carried into battle on a litter, his face uncovered and unscarred, his sword in his right hand. In fact, at the Battle of Montgisard, he was still able to fight on horseback, and he used his sword with his left hand, since his right hand and arm had been the first affected by his illness.[16]

Baldwin appears, with varying degrees of historical fidelity, in a number of novels. These include Zofia Kossak-Szczucka's Król trędowaty (The Leper King), Manuel Mujica Láinez's fantasy El unicornio (The Wandering Unicorn), Cecelia Holland's Jerusalem, Judith Tarr's historical fantasies Alamut and The Dagger and the Cross, The Knights of Dark Renown by Graham Shelby (1969), Nikos Kazantzakis's Saint Francis and The Crusader King by Susan Peek. In addition, Texan author Serafia Cross is currently writing a series of historical fiction novels centered around Baldwin, titled The Last King of Legends, the first two books of which were published in 2011 and 2012. Baldwin is generally depicted as a sympathetic character. Baldwin has also featured in bandes dessinées: Serge Dalens's L'Étoile de Pourpre ("The Purple Star") (also published as Baudouin IV de Jérusalem) and Michel Bom and Thierry Cayman's Sylvain de Rochefort series. Dalens's work was originally illustrated by Pierre Joubert, whose pictures of Baldwin are associated with his image as a role-model in the French Scout movement.

A fictionalized version of Baldwin IV is played by Edward Norton in the 2005 movie Kingdom of Heaven.

He appears to have inspired 'The Leper' in the Darkest Dungeon series, as in his introductory comic he is shown to be adored by many, and he self-exiled himself.

This article is issued from Wikipedia - version of the 6/10/2016. The text is available under the Creative Commons Attribution/Share Alike but additional terms may apply for the media files.