"Raymond III" redirects here. For the count(s) of Toulouse with this number, see Raymond III, Count of Toulouse. 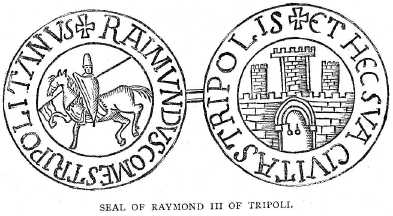 Raymond was a great-great-grandson of Raymond IV of Toulouse (Raymond I of Tripoli). He succeeded his father Raymond II, who had been killed by the Hashshashin, in 1152, when he was young. His mother, princess Hodierna of Jerusalem, daughter of King Baldwin II, ruled as regent until Raymond came of age a few years later. He was also known as Raymond the Younger to distinguish him from his father.

In 1160, Byzantine emperor Manuel I Komnenos was seeking a wife from the Crusader states. The two candidates presented to him were Raymond's sister Melisende, and Princess Maria of Antioch. At first, Melisende was chosen, and Raymond collected an enormous dowry, while negotiations continued for over a year (during this time he prepared a fleet of 12 galleys to escort Melisende). However, Manuel's ambassadors heard the rumours that Melisende (and Raymond himself) might have been fathered by someone other than Raymond II, and the marriage was called off; Manuel married Maria instead. Raymond, feeling slighted for both himself and his sister, responded by converting the galleys into men-of-war to plunder the Byzantine island of Cyprus. Melisende later entered a convent, where she died fairly young.

In 1164 Raymond and Bohemund III of Antioch marched out to relieve Harim, which was under siege by Nur ad-Din Zengi. The crusader army was defeated in the ensuing battle on August 12; Raymond, Bohemund, Joscelin III of Edessa, Hugh VIII of Lusignan, and others were taken captive and imprisoned in Aleppo. Raymond remained in prison until 1173, when he was ransomed for 80,000 pieces of gold. During his captivity, King Amalric I of Jerusalem ruled as regent of the county, and dutifully returned it to Raymond once he was released.

In 1174 Amalric died and was succeeded by his son Baldwin IV, who was still too young to rule on his own and furthermore was suffering from leprosy. Miles of Plancy, "seneschal of the kingdom", claimed the regency. But Raymond soon arrived and, as first cousin and closest male relative of King Amalric, demanded to be named bailli (also "bailiff" or "regent"). In this he was supported by the major barons of the kingdom, including Humphrey II of Toron, Balian of Ibelin, and Reginald of Sidon. Soon Miles was assassinated in Acre and Raymond was invested as bailli.

Raymond married Eschiva of Bures, Princess of Galilee[1] and the widow of Walter of Saint-Omer of Tiberias, which allowed him to gain control over much of the northern part of the Kingdom of Jerusalem, especially the fortress at Tiberias on the Sea of Galilee. As regent, he appointed William of Tyre chancellor of Jerusalem in 1174 and archbishop of Tyre in 1175. He retired as bailli when Baldwin IV came of age in 1176, having arranged for Baldwin IV's sister Sibylla of Jerusalem to marry William Longsword of Montferrat. William died in 1177 while Sibylla was pregnant with the future Baldwin V.

Amalric I had married twice, to Agnes of Courtenay, now married to Reginald of Sidon, and to Maria Comnena, the dowager Queen, who had married Balian of Ibelin in 1177. His daughter by Agnes, Sibylla, was already of age, the mother of a son, and was clearly in a strong position to succeed her brother, but Maria's daughter Isabella had the support of her stepfather's family, the Ibelins.

Raymond's own position amid these tensions was difficult and controversial. As the king's nearest relative in the male line, he had a strong claim to the throne himself. However, although his wife had had several children by her first husband, he had no children of his own to succeed him; this seems to have held him back from advancing himself as king. Instead, he acted as a power-broker, working closely with the Ibelins and attempting to influence the marriages of the princesses. The king, meanwhile, relied considerably on his mother and her brother, Joscelin III of Edessa, who had no claims of their own to advance.

In 1179, Baldwin began planning to marry Sibylla to Hugh III of Burgundy, but by spring 1180 this was still unresolved. Raymond attempted a coup, and began to march on Jerusalem with Bohemund III, to force the king to marry his sister to a local candidate of his own choosing, probably Baldwin of Ibelin, Balian's older brother. To counter this, the king hastily arranged her marriage to Guy of Lusignan, younger brother of Amalric, the constable of the kingdom. A foreign match was essential to bring the possibility of external military aid to the kingdom. With the new French king Philip II a minor, Guy's status as a vassal of the King and Sibylla's first cousin Henry II of England – who owed the Pope a penitential pilgrimage – was useful. Raymond returned home without entering the kingdom.

By 1182, Baldwin IV, increasingly incapacitated by his leprosy, named Guy as bailli. Raymond contested this, but when Guy fell out of favour with Baldwin the following year, he was re-appointed bailli and was given possession of Beirut. Baldwin came to an agreement with Raymond and the Haute Cour to make Baldwin of Montferrat, Sibylla's son by her first marriage, his heir, before Sibylla and Guy. The child was crowned co-king as Baldwin V in 1183 in a ceremony presided by Raymond. It was agreed that, should the boy die during his minority, the regency would pass to "the most rightful heirs" until his kinsmen – the Kings of England and France and Frederick I, Holy Roman Emperor – and the Pope were able to adjudicate between the claims of Sibylla and Isabella. These "most rightful heirs" were not named.

Baldwin IV died in spring 1185, and was succeeded by his nephew. Raymond was bailli, but he had passed Baldwin V's personal guardianship to Joscelin III of Edessa, his maternal great-uncle, claiming that he did not wish to attract suspicion if the child, who does not seem to have been robust, were to die. Baldwin V died during the summer of 1186, at Acre. His paternal grandfather William V of Montferrat and Joscelin escorted his coffin to Jerusalem, but Raymond was absent.

Neither side paid any heed to Baldwin IV's will. After the funeral, Joscelin had Sibylla named as her brother's successor, although she had to agree to divorce Guy, just as her father had divorced her mother, with the guarantee that she would be allowed to choose a new consort. Once crowned, she immediately crowned Guy. Meanwhile, Raymond had gone to Nablus, home of Balian and Maria, and summoned all those nobles loyal to Princess Isabella and the Ibelins. Raymond wanted instead to have her and her husband Humphrey IV of Toron crowned. However, Humphrey, whose stepfather Raynald of Châtillon was an ally of Guy, deserted, and swore allegiance to Guy and Sibylla. Instead of arguing and possibly causing a civil war, Raymond withdrew to Tripoli.

In Tripoli Raymond made peace with Saladin, perhaps hoping to ally with him against their common enemy Guy. At the end of 1186 Saladin, with his army stationed at Raymond's fief of Tiberias, threatened an invasion of the kingdom if Raynald continued to attack Muslim caravans. An embassy, led by Balian of Ibelin, was sent by Guy to negotiate with Raymond, but Saladin's troops ambushed them at the Battle of Cresson in May 1187. Raymond reluctantly made peace with Guy after this, and Saladin immediately besieged Tiberias, rather than pillage the kingdom as the Crusaders expected. Raymond and Guy combined their forces at Acre but could not agree on a plan of action; Raymond preferred not to meet Saladin in a pitched battle, even though Raymond's wife Eschiva was still in Tiberias. Guy did not agree, and instead the Crusaders marched into a waterless plain, were surrounded by Saladin's army, and were almost completely destroyed at the Battle of Hattin outside Tiberias. Raymond led the vanguard, but five of Raymond's own knights defected to Saladin's side and told him of the disagreements in the crusader army. The vanguard was surrounded and Raymond led two unsuccessful cavalry charges. The Muslim troops allowed him to pass through in the second charge, and, cut off from the main army, he fled. He was one of the few to escape.

Raymond, instead of joining his wife in the trap that was the Citadel of Tiberias, and the other survivors regrouped in Tyre. He then returned to Tripoli, probably in August.

On Sunday, July 5, Saladin traveled the six miles (10 km) to Tiberias and, there, Raymond's wife surrendered the citadel of the fortress. She was allowed to leave for Tripoli with all her family, followers, and possessions.

Raymond died in Tripoli around September or October 1187, of pleurisy. He had appointed as his successor his godson Raymond of Antioch, but insisted that the county should be handed to any member of the family of the Counts of Toulouse who might in the future come to Palestine. Raymond of Antioch's father Bohemund III of Antioch installed his younger son Bohemund IV as count.

William of Tyre described Raymond as:

Among Muslim authors, Ibn al-Athir remarked that "Among the Franj of that time, there was no wiser or more courageous man than the lord of Tripoli." Ibn Jubair stated that he had "remarkable intelligence and astuteness."

Regarding his marriage to the widow Eschiva of Bures, William of Tyre wrote that he "loved her and her children as tenderly as though she had borne them all to him." Raymond and Eschiva had no children of their own.

Raymond in fiction, film and game

Raymond appears in a number of novels set in Outremer. He receives sympathetic treatment by Graham Shelby in The Knights of Dark Renown (1969). The children's book Knight Crusader (1954) by Ronald Welch is slightly ambivalent, while Susan Peek's Crusader King (2004), a proselytising children's novel about Baldwin IV, is downright hostile towards him, depicting him as the stereotypical 'wicked uncle', plotting against Baldwin, and in Saladin's pay.

A largely fictionalised version of Raymond, renamed the Count of Tiberias in order to avoid first-name confusion with Raynald and geographical confusion with Tripoli in Libya, is played by Jeremy Irons in the 2005 movie Kingdom of Heaven, scripted by William Monahan. His role as Count of Tripoli plays no part in the movie and Raymond/Tiberias is simply 'Marshall' (sic) of Jerusalem. Irons is a good physical match with William of Tyre's description. An earlier draft of the script did mention Raymond by first name, and included his speech before Hattin begging the king not to go to the relief of Tiberias, although it was being held by his wife. His disputes with Raynald, Guy, and the so-called "court party" are depicted broadly in accordance with the historiographical tradition of M. W. Baldwin and Steven Runciman: Monahan seems to have been unaware of more recent scholarship; however, he is depicted as not taking part in the battle of Hattin, and leaves the kingdom with the intention of retiring to Cyprus, rather than returning home to die.

Raymond is also a general of the Kingdom of Jerusalem at the Medieval II: Total War, Crusade Campaign.