The original name for this city was "Bandar Brunei" or "Brunei Town" in English. In 1967, Sultan Omar Ali Saifuddien III abdicated in favour of his eldest son, Hassanal Bolkiah and took the title of "Seri Begawan".[3] Omar was then made the defense minister and on 5 October 1970, the city was renamed to honor him.[3][4][5][6] The word "Begawan" was also used for Bruneian monarchs who have abdicated, the word originally coming from the Sanskrit word for "god": भगवान् bhagavān. Besides that, Seri Begawan was known as "blessed one" in Sanskrit.[4] Seri comes from the honorific Sanskrit word श्री Sri, and Bandar comes from Persian via Indian languages and originally meant "harbour" or "port" or "haven".[4][6] In Malay, the word bandar means "town" or a "city".

Human settlement in Brunei can be traced back as far as 6th and 7th century with Malay trading centre and fishing port located near the current site of this city.[4] The first settlement on the banks of the Brunei River can be traced back to the 8th century where there had been settlements similar to those in Kampong Ayer, located near the present site of the Brunei Museum with the modern city on the opposite shore.[7] During the Bruneian Empire period from 15th–17th century, the Sultanate ruled much part of Borneo including the southern part of the Philippines and its capital of Manila,[8][9] with the water settlement near the city area became the third centre of the administration after been moved twice from Kota Batu and Kampong Ayer.[4][5][6][10] When the Sultanate rule declined through the eighteenth century due to the arrival of western powers such as the Spanish, Dutch and the British, this settlement population was totally decreased from its peak of 20,000 inhabitants.[4] From 1888 until its independence in 1984, Brunei was a British protectorate and land development began in 1906 when the British resident encouraged the Sultanate citizens to moved on a reclaimed land on the western bank of the inlet.[10] In 1899, first oil well was drilled at Ayer Bekunchi near Kampung Kasat, Bandar Seri Begawan. Although the oil well was drilled as deep as 259 metres (850 feet), no oil was found in the well. Oil exploration in Brunei later shifted to Seria and Belait District in 1924.[11][12][13] Sultan Muhammad Jamalul Alam II established a new palace on the west bank in 1909 after been persuaded by the British,[5] along with the arriving of Chinese traders to boost the economy. Mosque and government buildings was also built along the western shores in 1920.[4] In the same year, the new settlement was declared as a new capital of Brunei and became a municipal area.[10] 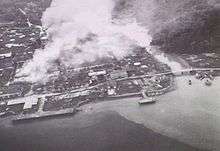 Brunei Town under Allied attack in 1945; the attack was intended to flush out the Japanese.

Brunei Town in the 1950, with the starting of the redevelopment.

However, the city prosperity was almost ended when the city was captured by the Japanese in 1941, before been recaptured by the Allied forces in 1945. During the war, most infrastructure was destroyed by Japanese and Allied bombing.[14] The British began reconstructing most of its possessions in Borneo at the end of 1945 with the restoration of the law and order and the reopening of schools.[14] In 1950, Sultan Omar Ali Saifuddien III, upon his ascension to the throne, negotiated with the British for an increase in corporate taxes, growing from 10% to 30% in 1953. A M$1.2 million (US$0.39 million) allotment to Brunei for war damages during the Japanese occupation increased from M$1 million in 1946 to M$100 million (US$32.6 million) in 1952. A five-year development plan with a total budget of M$100 million was also implemented in 1953, with infrastructure receiving the largest percentage (80%) and the rest going toward social programmes.[14] Together with the expansion of the oil and gas industry, commercialization began to transform Brunei's capital and a large number of public buildings were constructed, along with the development of a central business district in the 1970s and 1980s.[4][5] On 1 August 2007, Sultan Hassanal Bolkiah gave consent for the expansion of the city from 12.87 km2 (4.97 sq mi) to 100.36 km2 (38.75 sq mi).[6]

The city is administered by the Bandar Seri Begawan Municipal Department, a department which was originally responsible to maintain the cleanliness and provide services to the municipality. The city obtained city status in 1920.[18]

With an area of 100.36 square kilometres, the city is located in the most populous district of Brunei namely Brunei-Muara District.[19] The city comprises the following Mukims (subdivisions of a district):[20]

Brunei features a tropical rainforest climate which is relatively hot and wet.[21] The city sees heavy precipitation throughout the course of the year with the Northeast Monsoon blows from December to March, while the Southeast Monsoon around June to October.[22]

The Bruneian Census 2011 Report estimated the population of Bandar Seri Begawan is around 20,000, while the metropolitan area has around 279,924.[1][2] The majority of Bruneians are Malays, with Chinese being the most significant minority group.[2] Aboriginal groups such as the Bisaya, Belait, Dusun, Kedayan, Murut and Tutong also exist. They are classified as part of the Malay ethnic groups and have been given the Bumiputera privileges.[1] Large numbers of foreign workers are also found within Brunei and the capital city, with the majority being from Malaysia, Thailand, Philippines, Indonesia (mostly Betawi) and the Indian subcontinent.[26][27] 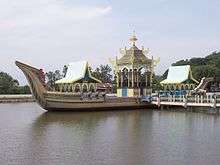 The Ceremonial Ship beside the Sultan Omar Ali Saifuddin Mosque

Located in Jalan Kianggeh, the Lapau (Royal Ceremonial Hall) is used for royal traditional ceremonies. It was here that the sultan Hassanal Bolkiah was crowned on 1 August 1968. The interior of the Lapau and sultan's throne are decorated in exquisite gold. Within the precincts of the Lapau is the Dewan Majlis where the legislative assembly used to sit. Official permission is required by visitors to enter this building. With the completion of the new legislative council building in Jalan Mabohai, the Lapau will soon become a symbol of the sultanate's constitutional history.

Located away from the banks of Brunei River, behind the department store Soon Lee Megamart at Mile One, Jalan Tutong, the Royal Mausoleum and the graveyard have been used by succeeding generations of sultans. Inside the Mausoleum itself are the remains of the last four sultans, Haji Sir Muda Omar Ali Saifuddin (1950–1967), who died in 1986, Ahmad Tajuddin Ibnu Sultan Muhammad Jamalul Alam (1924–1950), Muhammad Jamalul Alam Ibnu Sultan Hashim (1906–1924), and Hashim Jalilul Alam Putera Sultan Omar Ali Saifuddin II (1885–1906). Other members of the royal families from those times are also buried there.

A legendary figure who was chased away from Kampong Ayer for committing adultery. Adultery was a taboo in Bruneian society. She died in what we know today as Pusat Bandar (Central City). However some sources say that she was a Queen of Brunei.

This Istana or Palace is located near to the river. It is one of the oldest non-residential palaces in Brunei. This palace was where the Begawan Sultan Omar Ali Saifuddin III resided and where Sultan Hassanal Bolkiah was born. It is not open to the public. 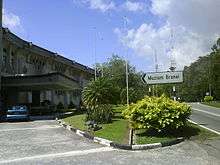 Located on an archaeological site at Kota Batu, Brunei museum is the largest in the country. 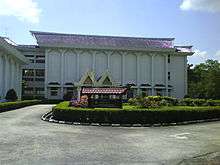 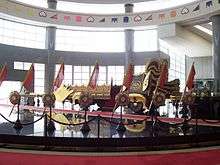 The Istana Nurul Iman palace is the residence of the sultan of Brunei. It is located 3 km southwest of the city centre. Its name is taken from Arabic, meaning "Palace of the Light of Faith". The palace was designed by Leandro V. Locsin, and built by the Filipino firm, Ayala Corporation, mixing Malay and Islamic elements in the building architecture.[29] It contains 1,788 rooms, with 257 bathrooms, and a banquet hall that can accommodate up to 5,000 guests. The palace only opens to public during the yearly three-day Hari Raya Adilfitri celebration.[30] 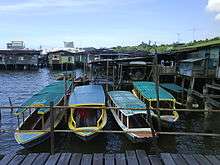 The city's suburb incorporates nearby Kampong Ayer (water village), in which houses were built on stilts and stretches about 8 km (5.0 mi) along the Brunei river. It was founded 1,000 years ago.[31] The village is considered the largest stilt settlement in the world with approximately 30,000 residents and 2,000 houses.[32] "Venice of the East" was coined by Antonio Pigafetta in honour of the water village he encountered at Kota Batu (just east of city's central business district). Pigafetta was on Ferdinand Magellan's last voyages when he visited Brunei in 1521.[33]

This latest addition to the beautiful Bandar Seri Begawan is strategically overlooking the historical Kg. Ayer. The approximately 1.8-hectare (4.4-acre) site took almost three years to be completed and was officially opened to the public on 28 May 2011. The Waterfront is accessible to everyone as it is open 24 hours where public can enjoy sightseeing and take a break at the outdoor cafes offering varieties of drinks and dishes.

This narrow strip of landscaped park between Jalan Tutong and the Sungei Brunei was created in 1986 as a "Square". It has a permanent display of the work of a sculptor from each of the original ASEAN countries. The 1 km (0.62 mi)-long park has pleasant walkways bordered by shrubs and the mangrove fringed Pulau Ranggu where two species of monkeys live, including the notable proboscis monkey only found in Borneo. The park also offers some of the best views of the Istana Nurul Iman. 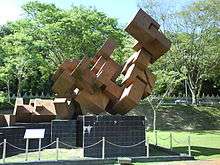 Located just a few minutes walk from the city centre, this is a popular trekking trail for the local residents of Bandar Seri Begawan. There are well made walkaways through the small park which has benches and picnic spots as well as a waterfall and ponds with water lilies.

The park offers a great view of the Kampong Ayer and downtown Bandar Seri Begawan. There is a well maintained wooden walkaway with viewing huts along the way. These huts provide a good vantage points of Kampong Ayer and its surroundings. 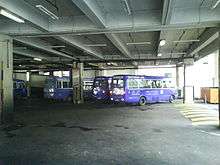 The main bus station is located at Jalan Cator. 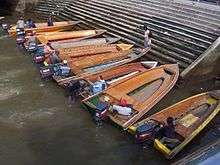 The capital is connected to Bus of Bandar Seri Begawan the western part of the country by road. To get to the eastern part of Brunei (Temburong) it is necessary to travel through Sarawak which is in Malaysia, via the town of Limbang which is accessed by the Kuala Lurah Bus terminal. To get to Bandar Seri Begawan from the west, access is via Miri town in Sarawak via the Sungai Tujuh Bus terminal and then along the coastal highway.

The main bus station in the city is located in Jalan Cator underneath a multi-story car park. There are six bus routes servicing Bandar Seri Begawan area; the Central Line, Circle Line, Eastern Line, Southern Line, Western Line and Northern Line. The buses operate from 6.30 am till 6.00pm except for Bus No. 1 and 20 which have extended to the night. All bus routes begin and terminate their journey at the main bus terminal. Buses heading to other towns in Brunei such as Tutong, Seria and Kuala Belait also depart from the main bus terminal and Taxicab.

Brunei International Airport serves the whole country. It is 11 km (6.8 mi) from the town centre and can be reached in 10 minutes via the Sultan Hassanal Bolkiah Highway. Royal Brunei Airlines, the national airline, has its head office in the RBA Plaza in the city.[34][35]

A water taxi service known as 'penambang' is used for transportation between downtown Bandar Seri Begawan and Kampong Ayer. Water taxis are the most common means of negotiating the waterways of Kampung Ayer. They can be hailed from the numerous "docking parts" along the banks of the Brunei River. Fares are negotiable. Regular water taxi and boat services depart for Temburong between 7:45 am and 4 pm daily, and also serve the Malaysian towns of Limbang, Lawas, Sundar and Labuan. A speedboat is used for passengers travelling to Penambang Ferry Service and from Bangar and Limbang.

Brunei are known to its shophouses design. These are the shopping areas:

All levels of education are available in Bandar Seri Begawan from kindergarten to the tertiary level.

Secondary schools in the capital:

Recently there have been plans to develop Bandar Seri Begawan to look more Urban (similar to Jakarta). Redevelopment has taken place. The municipality is executing a BSB Master-plan with the support of both locals and government. Bandar Seri Begawan looking for more monuments such as Monas-style Brunei National Monument.