This article is about the word. For other uses of "Shri", "SHRI" and "Shri", see Sri (disambiguation). 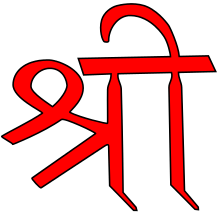 Sri (Devanagari: श्री, IAST; Śrī), also transliterated as Sree, Shri, Shree, Si or Seri is a word of Sanskrit origin, used in the Indian subcontinent as a polite form of address equivalent to the English "Mr." or "Ms." in written and spoken language, but also as a title of veneration for deities. It is also widely used in other South and Southeast Asian languages.

Sri has a core meaning of "diffusing light or radiance", related to the root śrā "to cook, boil", but as a feminine abstract noun, it has received a general meaning of "grace, splendour, lustre, beauty; wealth, affluence, prosperity".[1][2]

Derived forms of address are Shrimati (abbreviated Smt for married women) and Sushri for women (regardless of marital status). 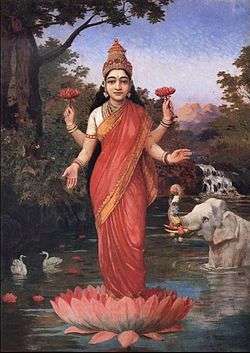 Sri is also the name of Lakshmi, the Hindu goddess of wealth.

Sri is a polite form of address equivalent to the English "Mr." or "Ms."[3] The title is derived from Sanskrit श्रीमान् (śrīmān). This use may stem from the Puranic conception of prosperity.

Śhrī is also frequently used as an epithet of some Hindu gods, in which case it is often translated into English as Holy. Also in language and general usage, Śhrī if used by itself and not followed by any name then it refers to the supreme consciousness i.e. God.

Shri Devi (or in short Shri, another name of Lakshmi, consort of Vishnu) is the devi (goddess) of wealth according to Hindu beliefs. Among today's orthodox Vaishnavas, the English word "Shree" is a revered syllable and is used to refer to Lakshmi as the supreme goddess, while "Sri" or "Shri" is used to address humans.

Śhrī is one of the names of Ganesha, the Hindu god of prosperity.

Shri may be repeated depending on the status of the person.

Shri, along with the forms Shrimati (for married women, equivalent to English Mrs.) and Sushri, is often used by Hindus, Buddhists, Sikhs and Jains as a respectful affix to the names of celebrated or revered persons.

There is a common practice of writing Śhrī as the first word centralised in line at the beginning of a document.

On Vidyāraṃbhaṃ ceremony, the mantra "Om hari sri ganapataye namah" is written on sand or in a tray of rice grains by the child, under the supervision of Guru or Priest.

Another usage is as an emphatic compound (which can be used several times: shri shri, or shri shri shri, etc.) in princely styles, notably in Darbar Sri, Desai Shri, and Thakur Sri or Shrii Shrii Anandamurti, the founder of the social and spiritual movement Ananda Marga (the Path of Bliss).

The honorific can also be applied to objects and concepts that are widely respected, such as the Sikh religious text, the Shri Guru Granth Sahib. Similarly, when the Ramlila tradition of reenacting the Ramayana is referred to as an institution, the term Shri Ramlila is frequently used.

Its usage is common as a raga name, either as a prefix or postfix. Some examples are Shree, Bageshree, Dhanashree, Malashree, Jayantashree, Rageshree, and Shree ranjani.

The honorific is incorporated into many place names. A partial list: