Banganapalle or Banagana Palli is a town in the state of Andhra Pradesh, India. It lies in Kurnool district, 70 km south of the town of Kurnool. Banganapalle is famous for its mangoes and has a cultivar, Banganapalle, named after it. Between 1790 and 1948, Banganapalle was the capital of the princely state of the same name, Banganapalle State.

Map of the princely state of Banganapalle, 1893

In 1601, Sultan Ismail Adil Shah of Bijapur conquered the fortress of Banganapalle from Raja Nanda Chakravathy. The fort and surrounding districts were placed under the control of his victorious general, Siddhu Sumbal, who held them until 1665. Muhammad Beg Khan-e Rosebahani was granted Bangangapalle and the surrounding jagir in perpetual fiefdom but died without a male heir, leaving the jagir of Banganapalle to his adopted son, Faiz Ali Khan Bahadur. Aurangzeb conquered the Sultanate of Bijapur in 1686, but Faiz Ali Khan's fief was secured by the intervention of his maternal uncle Mubariz Khan, who served as Aurangzeb's viceroy of the Deccan. 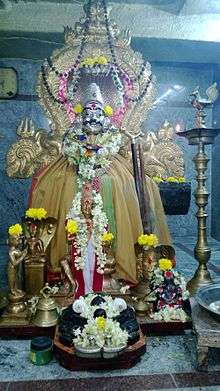 The town was upgraded from Gram panchayat to Nagar panchayat on 23 June 2011.[2]

Banganapalle is a mango variety generally known as The King of Mangoes, cultivar named after Banganapalle. An unspoilt obliquely oval specimen presents an unblemished golden yellow thin edible skin. These mangoes are large sized, weighing on an average 350-400 grams. The pulp is fibreless, firm and yellow with sweet taste.[3][4] 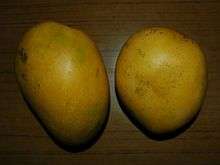 The primary and secondary school education is imparted by government, aided and private schools, under the School Education Department of the state.[5][6] The medium of instruction followed by different schools are English, Telugu.