This article is about the municipality in India. For its namesake district, see Kurnool district.

Kurnool is a city, former princely state and the headquarters of Kurnool district in the Indian state of Andhra Pradesh.[5] The city is often referred as The Gateway of Rayalaseema.[6] It was the capital of Andhra State from 1 October 1953 to 31 October 1956. As of 2011 census, it is the fifth most populous city in the state with a population of 460,184.[1][2]

The name Kurnool is derived from Kandanavolu.[7]

The Ketavaram [8] rock paintings from the Paleolithic era and are (18 kilometres from Kurnool). Also the Jurreru Valley, Katavani Kunta[9] and Yaganti in Kurnool District have some important rock art's and painting's in the vicinity, may be dated from 35,000 to 40,000 years ago.

Little was known about Kurnool town before the 11th century. The earliest knowledge of this settlement dates from the 11th century. It has developed as transit place on the southern banks of the river Tungabhadra. It was ruled by Cholas and later by Kakatiya kings in the 12th and 13th centuries.

Later on it became a jagir (autonomous feudal estate of the country under Jagirdars). Late it came under the influence of Vijayanagar kings and it was during the 16th century that Achyuta Raya built the Kurnool Fort.

During the 17th century it was ruled by Gopal Raja. The Pathan general Abdul Wahab conquered king Gopal Raja and ruled over the country for 16 years.

The town became a vassal princely state of the Mughal empire under Aurangazeb, who took control in 1686. The town was the capital and seat of ruling Muslim princes, styled Nawabs: [10]

In 1839 the British Government took over direct colonial control, deposing the unruly princely family, which remains prominent in India and made a new fortune in the UAE.

In 1858 it was made over to a Collector under the General regulations.

The city served as the capital of Andhra State from 1953–1956, until in 1956, the Telangana region was merged with Andhra State to form Andhra Pradesh state, and its capital was shifted from Kurnool to Hyderabad.[11][12]

Kurnool lies on the banks of the Tungabhadra River. The Hundri and Neeva rivers also flow through the city. The K.C. Canal (Kurnool–Cuddapah) was built by the Dutch for transportation, but later used for irrigation. 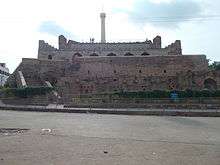 Landmarks in and around the city include Konda Reddy Fort (or Kondareddy Burj) is the remnant of Kurnool fort on the north east part of the city.[14] Orvakal rock Garderns with a cave museum lies on the south east of the city.[15]

Others include Sikhs & Parsis

As per final data of 2011 census, Kurnool urban agglomeration had a population of 484,327. The literacy rate was 77.37 per cent.[19] note: The Office of Registrar General & Census Commissioner of India. note: UA = Urban Agglomeration.

It is the headquarters of the mandal, the revenue division and the district of the same name. From 1 October 1953 to 31 October 1956, Kurnool was also the state capital of Andhra State (not Andhra Pradesh), which was carved out of Madras State in 1953. Tanguturi Prakasam was the chief minister of Andhra State during this period. The present day District court buildings were used by the State Assembly. Now, Present MLA is S V Mohan Reddy.[20]

The primary and secondary school education is imparted by government, aided and private schools of the School Education Department of the state.[21][22] The medium of instruction followed by different schools are English, Telugu. 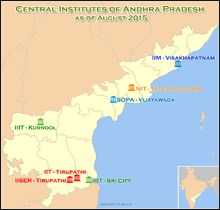 There are good number of government and private educational institutions in the city. Some of the universities and colleges are

Kurnool is well connected by road with State Capital Vijayawada. It is in halfway between [[Hyderabad and Bengaluru. National Highway 44 (India) connects Kurnool to Hyderabad. The State Highway 51 connects to Srisailam, Vinukonda, Guntur, Vijayawada. National_Highway_40_(India)_(new_numbering) runs from Kurnool to Chittoor are te major highways pasing through the city. The city has a total road length of 519.22 km[23] State owned bus transport system, APSRTC, operates buses from Kurnool bus station to other parts of the state.[24][25]]]