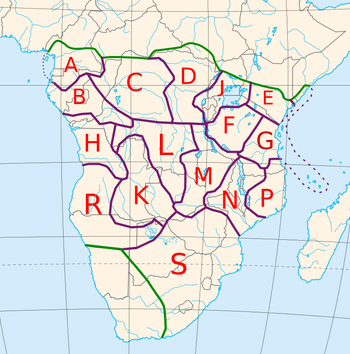 Bantu peoples is used as a general label for the 300–600 ethnic groups in Africa who speak Bantu languages.[1] They inhabit a geographical area stretching east and southward from Central Africa across the African Great Lakes region down to Southern Africa.[1] Bantu is a major branch of the Niger-Congo language family spoken by most populations in Africa. There are about 650 Bantu languages by the criterion of mutual intelligibility,[2] though the distinction between language and dialect is often unclear, and Ethnologue counts 535 languages.[3]

Around 3000 years ago, speakers of the Proto-Bantu language group began a millennia-long series of migrations eastward from their homeland between West Africa and Central Africa, at the border of eastern Nigeria and Cameroon.[4] This Bantu expansion first introduced Bantu peoples to central, southern, and southeastern Africa, regions they had previously been absent from. The proto-Bantu migrants in the process assimilated and/or displaced a number of earlier inhabitants that they came across, including Pygmy and Khoisan populations in the center and south, respectively. They also encountered some Afro-Asiatic outlier groups in the southeast, who had been there for centuries migrating from Northeast Africa.[5][6]

Individual Bantu groups today often include millions of people. Among these are the Luba of the Democratic Republic of the Congo, with over 13.5 million people; the Zulu of South Africa, with over 10 million people; the Sukuma of Tanzania which are about eight million people, Kikuyu of Kenya, with over six million people. Although only around five million individuals speak the Arabic-influenced Swahili language as their mother tongue,[7] it is used as a lingua franca by over 140 million people throughout Southeast Africa.[8] Swahili also serves as one of the official languages of the African Union.

The word Bantu, and its variations, means "people" or "humans". The root in Proto-Bantu is reconstructed as *-ntu. Versions of the word Bantu (that is, the root plus the class 2 noun class prefix *ba-) occur in all Bantu languages: for example, as watu in Swahili; bantu in Kikongo; batu in Lingala; bato in Kiluba; bantu in Duala; abanto in Gusii; andũ in Kamba and Kikuyu; abantu in Kirundi, Zulu, Xhosa, Runyakitara,[9] and Ganda; wandru in Shingazidja; abantru in Mpondo; bãtfu in Phuthi; bantfu in Swati; banu in Lala; vanhu in Shona and Tsonga; batho in Sesotho, Tswana and Northern Sotho; antu in Meru; andu in Embu; vandu in some Luhya dialects; vhathu in Venda; and mbaityo in Tiv.

Current scholarly understanding places the ancestral proto-Bantu homeland in West Africa near the present-day southwestern border of Nigeria and Cameroon c. 4,000 years ago (2000 B.C.), and regards the Bantu languages as a branch of the Niger–Congo language family.[13] This view represents a resolution of debates in the 1960s over competing theories advanced by Joseph Greenberg and Malcolm Guthrie, in favor of refinements of Greenberg's theory. Based on wide comparisons including non-Bantu languages, Greenberg argued that Proto-Bantu, the hypothetical ancestor of the Bantu languages, had strong ancestral affinities with a group of languages spoken in Southeastern Nigeria. He proposed that Bantu languages had spread east and south from there, to secondary centers of further dispersion, over hundreds of years.

Using a different comparative method focused more exclusively on relationships among Bantu languages, Guthrie argued for a single Central African dispersal point spreading at a roughly equal rate in all directions. Subsequent research on loanwords for adaptations in agriculture and animal husbandry and on the wider Niger–Congo language family rendered that thesis untenable. In the 1990s, Jan Vansina proposed a modification of Greenberg's ideas, in which dispersions from secondary and tertiary centers resembled Guthrie's central node idea, but from a number of regional centers rather than just one, creating linguistic clusters.[14]

It is unclear exactly when the spread of Bantu-speakers began from their core area as hypothesized c. 5,000 years ago (3000 B.C.). By 3,500 years ago (1500 B.C.) in the west, Bantu-speaking communities had reached the great Central African rain forest, and by 2,500 years ago (500 B.C.) pioneering groups had emerged into the savannahs to the south, in what are now the Democratic Republic of the Congo, Angola, and Zambia. Another stream of migration, moving east, by 3,000 years ago (1000 B.C.) was creating a major new population center near the Great Lakes of East Africa, where a rich environment supported a dense population. Movements by small groups to the southeast from the Great Lakes region were more rapid, with initial settlements widely dispersed near the coast and near rivers, due to comparatively harsh farming conditions in areas farther from water. Pioneering groups had reached modern KwaZulu-Natal in South Africa by A.D. 300 along the coast, and the modern Northern Province (encompassed within the former province of the Transvaal) by A.D. 500.[15]

Before the expansion of farming and herding peoples, including those speaking Bantu languages, Africa south of the equator was populated by neolithic hunting and foraging peoples. Some of them were ancestral to proto-Khoisan-speaking peoples, whose modern hunter-forager and linguistic descendants, the Khoekhoe and San, occupy the arid regions around the Kalahari desert. The Hadza and Sandawe populations in Tanzania comprise the other modern hunter-forager remnant in Africa of these proto-Khoisan-speaking peoples.

Over a period of many centuries, most hunting-foraging peoples were displaced and absorbed by incoming Bantu-speaking communities, as well as by Ubangian, Nilotic, and Sudanic language-speakers in North Central and Eastern Africa. The Bantu expansion was a long series of physical migrations, a diffusion of language and knowledge out into and in from neighboring populations, and a creation of new societal groups involving inter-marriage among communities and small groups moving to communities and small groups moving to new areas.

After their movements from their original homeland in West Africa, Bantus also encountered in East Africa peoples of Afro-Asiatic (mainly Cushitic) and Nilo-Saharan (mainly Nilotic and Sudanic) ancestral origin. As cattle terminology in use amongst the few modern Bantu pastoralist groups suggests, the Bantu migrants would acquire cattle from their new Cushitic neighbors. Linguistic evidence also indicates that Bantus likely borrowed the custom of milking cattle directly from Cushitic peoples in the area.[16] Later interactions between Bantu and Cushitic peoples resulted in Bantu groups with significant Cushitic ethnic admixture, such as the Tutsi of the African Great Lakes region; and culturo-linguistic influences, such as the Herero herdsmen of southern Africa.[17][18]

On the coastal section of East Africa, another mixed Bantu community developed through contact with Muslim Arab and Persian traders. The Swahili culture that emerged from these exchanges evinces many Arab and Islamic influences not seen in traditional Bantu culture, as do the many Afro-Arab members of the Bantu Swahili people. With its original speech community centered on the coastal parts of Zanzibar, Kenya, and Tanzania – a seaboard referred to as the Swahili Coast – the Bantu Swahili language contains many Arabic loan-words as a result of these interactions.[19]

Between the 14th and 15th centuries, Bantu-speaking states began to emerge in the Great Lakes region in the savannah south of the Central African rain forest. On the Zambezi river, the Monomatapa kings built the famous Great Zimbabwe complex, a civilisation of what are today referred to as the Shona people. From the 16th century onward, the processes of state formation amongst Bantu peoples increased in frequency. This was probably due to denser population (which led to more specialized divisions of labor, including military power, while making emigration more difficult); to increased interaction amongst Bantu-speaking communities with Chinese, European, Indonesian, and Arab traders on the coasts; to technological developments in economic activity; and to new techniques in the political-spiritual ritualization of royalty as the source of national strength and health.[20] 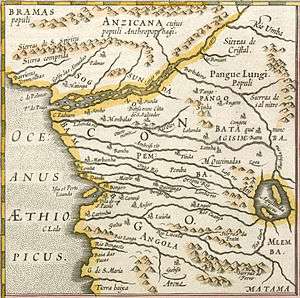 Between the 14th and 15th centuries, Bantu states began to emerge in the Great Lakes region in the savanna south of the Central African rain-forest. In Southern Africa on the Zambezi river, the Monomatapa kings built the famous Great Zimbabwe complex, the largest of over 200 such sites in Southern Africa, such as Bumbusi in Zimbabwe and Manyikeni in Mozambique. From the 16th century onward, the processes of state formation among Bantu peoples increased in frequency. Some examples of such Bantu states include: in Central Africa, the Kingdom of Kongo,[21] Lunda Empire,[22] and Luba Empire[23] of Angola, the Republic of Congo, and the Democratic Republic of Congo; in the Great Lakes Region, the Buganda[24] and Karagwe[24] Kingdoms of Uganda and Tanzania; and in Southern Africa, the Mutapa Empire,[25] Rozwi Empire,[26] and the Danamombe, Khami, and Naletale Kingdoms of Zimbabwe and Mozambique.[25]

Toward the 18th and 19th centuries, the flow of Zanj (Bantu) slaves from Southeast Africa increased with the rise of the Omani Sultanate of Zanzibar, based in Zanzibar, Tanzania. With the arrival of European colonialists, the Zanzibar Sultanate came into direct trade conflict and competition with Portuguese and other Europeans along the Swahili Coast, leading eventually to the fall of the Sultanate and the end of slave trading on the Swahili Coast in the mid-20th century.

Use of the term "Bantu" in South Africa 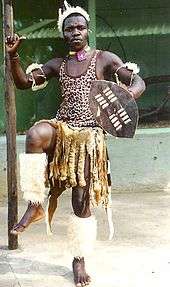 In the 1920s, relatively liberal South Africans, missionaries, and the small black intelligentsia began to use the term "Bantu" in preference to "Native" and more derogatory terms (such as "Kaffir") to refer collectively to Bantu-speaking South Africans. After World War II, the National Party governments adopted that usage officially, while the growing African nationalist movement and its liberal allies turned to the term "African" instead, so that "Bantu" became identified with the policies of apartheid. By the 1970s this so discredited "Bantu" as an ethno-racial designation that the apartheid government switched to the term "Black" in its official racial categorizations, restricting it to Bantu-speaking Africans, at about the same time that the Black Consciousness Movement led by Steve Biko and others were defining "Black" to mean all racially oppressed South Africans (Africans, Coloureds, and Indians).

Examples of South African usages of "Bantu" include: