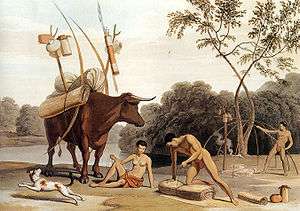 The Khoikhoi (/ˈkɔɪˌkɔɪ/; "people people" or "real people") or Khoi, spelled Khoekhoe in standardised Khoekhoe/Nama orthography, are a group of Khoisan people native to southwestern Africa. Unlike the neighbouring hunter-gatherer San people, the Khoikhoi traditionally practised nomadic pastoral agriculture.[1] When European immigrants colonised the area after 1652, the Khoikhoi maintained large herds of Nguni cattle in the Cape region. The Dutch settlers labelled them Hottentots (/ˈhɒtənˌtɒts/; Dutch: Hottentotten), in imitation of the sound of the click sounds that are characteristic of the Khoekhoe language,[2] but today this exonym is considered derogatory.[3]

The largest group of the Khoikhoi to remain as a group are the Namas. 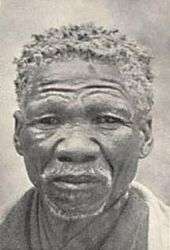 The Khoikhoi, originally part of a pastoral culture and language group to be found across Southern Africa, originated in the northern area of modern Botswana. Southward migration of the ethnic group was steady, eventually reaching the Cape approximately 2,000 years ago. Khoikhoi subgroups include the Namaqua to the west, the Korana of mid-South Africa, and the Khoikhoi in the south. Husbandry of sheep, goats and cattle grazing in fertile valleys across the region provided a stable, balanced diet, and allowed the Khoikhoi to live in larger groups in a region previously occupied by the subsistence hunter-gatherers, the San. Advancing Bantu in the 3rd century AD encroached on the Khoikhoi territory, forcing movement into more arid areas. There was some intermarriage between migratory Khoi bands living around what is today Cape Town and the San. However the two groups remained culturally distinct as the Khoikhoi continued to graze livestock and the San to subsist on hunting-gathering.

The Khoi first encountered Portuguese explorers and merchants around AD 1500. The ongoing encounters were often violent. Local population dropped when the Khoi were exposed to smallpox by Europeans. Warfare against Europeans flared when the Dutch East India Company enclosed traditional grazing land for farms. Over the following century, the Khoi were steadily driven off their land, which effectively ended their traditional life.

Khoikhoi social organisation was profoundly damaged and, in the end, destroyed by colonial expansion and land seizure from the late 17th century onwards. As social structures broke down, some Khoikhoi people settled on farms and became bondsmen (bondservants) or farm workers; others were incorporated into existing clan and family groups of the Xhosa people. The first mission station in southern Africa,[5] Genadendal, was started in 1738 among the Khoi people in Baviaanskloof in the Riviersonderend Mountains by Georg Schmidt a Moravian Brother from Herrnhut, Saxony, now Germany. 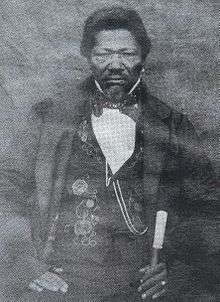 Early European settlers sometimes intermarried with the indigenous Khoikhoi, producing a sizeable mixed population known at the time as "Basters" and in some instances still so called, e. g., the Bosluis Basters of the Richtersveld and the Baster community of Rehoboth, Namibia. 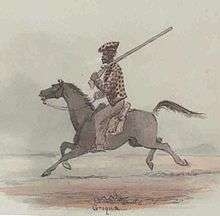 By the early 1800s, the remaining Khoi of the Cape Colony suffered from restricted civil rights and discriminatory laws on land ownership. With this pretext, the powerful Commissioner General of the Eastern Districts, Andries Stockenstrom, facilitated the creation of the "Kat River" Khoi settlement near the eastern frontier of the Cape Colony. The more cynical motive was probably to create a buffer-zone on the Cape's frontier, but the extensive fertile land in the region allowed the Khoi to own their land and build communities in peace. The settlements thrived and expanded, and Kat River quickly became a large and successful region of the Cape that subsisted more or less autonomously. The people were predominantly Afrikaans-speaking Gonaqua Khoi, but the settlement also began to attract other Khoi, Xhosa and mixed-race groups of the Cape.

The Khoi were known at the time for being very good marksmen, and were often invaluable allies of the Cape Colony in its frontier wars with the neighbouring Xhosa. In the Seventh Frontier War (1846–1847) against the Gcaleka Xhosa, the Khoi gunmen from Kat River distinguished themselves under their leader Andries Botha in the assault on the "Amatola fastnesses". (The young John Molteno, later Prime Minister, led a mixed Commando in the assault, and later praised the Khoi as having more bravery and initiative than most of his white soldiers.)[6]

However harsh laws were still implemented in the Eastern Cape, to encourage the Khoi to leave their lands in the Kat River region and to work as labourers on white farms. The growing resentment exploded in 1850. When the Xhosa rose against the Cape Government, large numbers of Khoi for the first time joined the Xhosa rebels.

After the defeat of the rebellion and the granting of representative government to the Cape Colony in 1853, the new Cape Government endeavoured to grant the Khoi political rights to avert future racial discontent. Attorney General William Porter was famously quoted as saying that he "would rather meet the Hottentot at the hustings, voting for his representative, than meet him in the wilds with his gun upon his shoulder".[7] Thus, the government enacted the Cape franchise in 1853, which decreed that all male citizens meeting a low property test, regardless of colour, had the right to vote and to seek election in Parliament. However, this non-racial principle was eroded in the late 1880s by a literacy test, and later abolished by the Apartheid Government.[8]

From 1904 to 1907, the Germans took up arms against the Khoikhoi group living in what was then German South-West Africa, along with the Herero. Over 10,000 Nama, more than half of the total Nama population, perished. This was the single greatest massacre ever witnessed by the Khoikhoi people.

The religious mythology of the Khoikhoi gives special significance to the Moon, which may have been viewed as the physical manifestation of a supreme being associated with heaven. Tsui'goab is also believed to be the creator and the guardian of health, while Gunab is primarily an evil being, who causes sickness or death.[9]

UNESCO has recognised Khoikhoi culture through its inscription of the Richtersveld as a World Heritage Site. This important area is the only place where transhumance practices associated with the culture continue to any great extent.