The Swahili Coast refers to a coastal area in Southeast Africa inhabited by the Swahili people. It mainly consists of littoral Kenya, Tanzania and northern Mozambique. The term may also include some of the Indian Ocean islands, such as Zanzibar, Pate and Comoros, which lie off the Swahili Coast. The Swahili Coast has a distinct culture, demography, religion and geography, and as a result - along with other factors, including economic - has witnessed rising secessionism.[1] 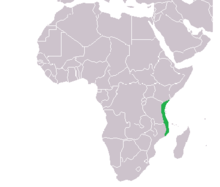 The major ports along the Swahili Coast include:

Parts of the area that are today considered Swahili Coast was known as Azania or Zingion in the Greco-Roman era, and as Zanj or Zinj in Middle Eastern and Chinese literature from the 7th to the 14th century.[2] Historical documents including the Periplus of the Erythraean Sea and works by Ibn Battuta describe the society, culture, and economy of the Swahili Coast at various points in its history.