Barbara Ehrenreich (/ˈɛrᵻnraɪk/;[1] born August 26, 1941) is an American author and political activist who describes herself as "a myth buster by trade",[2] and has been called "a veteran muckraker" by The New Yorker.[3] During the 1980s and early 1990s she was a prominent figure in the Democratic Socialists of America. She is a widely read and award-winning columnist and essayist, and author of 21 books. Ehrenreich is perhaps best known for her 2001 book Nickel and Dimed: On (Not) Getting By in America. A memoir of Ehrenreich's three-month experiment surviving on minimum wage as a waitress, hotel maid, house cleaner, nursing-home aide, and Wal-Mart clerk, it was described by Newsweek magazine as "jarring" and "full of riveting grit",[4] and by The New Yorker as an "exposé" putting "human flesh on the bones of such abstractions as 'living wage' and 'affordable housing'".[5]

Ehrenreich was born Barbara Alexander to Isabelle Oxley and Ben Howes Alexander in Butte, Montana, which she describes as then being "a bustling, brawling, blue collar mining town".[6] In an interview on C-SPAN, she characterized her parents as "strong union people" with two family rules: "never cross a picket line and never vote Republican".[2] In a talk she gave in 1999, Ehrenreich called herself a "fourth-generation atheist".[7]

"As a little girl", she told The New York Times in 1993, "I would go to school and have to decide if my parents were the evil people they were talking about, part of the Red Menace we read about in the Weekly Reader, just because my mother was a liberal Democrat who would always talk about racial injustice."[8] Her father was a copper miner who went to the Montana State School of Mines (now part of the University of Montana), and then to Carnegie Mellon University. He eventually became a senior executive at the Gillette Corporation. Her parents later divorced.

Ehrenreich studied chemistry at Reed College, graduating in 1963. Her senior thesis was entitled Electrochemical oscillations of the silicon anode. In 1968, she received a Ph.D in cellular immunology from Rockefeller University.[9]

In 1970, Ehrenreich gave birth to her daughter Rosa in a public clinic in New York. "I was the only white patient at the clinic," she told The Globe and Mail newspaper in 1987. "They induced my labor because it was late in the evening and the doctor wanted to go home. I was enraged. The experience made me a feminist."[10]

After completing her doctorate, Ehrenreich did not pursue a career in science. Instead, she worked first as an analyst with the Bureau of the Budget in New York City and with the Health Policy Advisory Center, and later as an assistant professor at the State University of New York at Old Westbury. In 1972, Ehrenreich began co-teaching a course on women and health with feminist journalist and academic Deirdre English. Through the rest of the seventies, Ehrenreich worked mostly in health-related research, advocacy and activism, including co-writing, with English, several feminist books and pamphlets on the history and politics of women's health. During this period she began speaking frequently at conferences staged by women's health centers and women's groups, by universities, and by the United States government. She also spoke regularly about socialist feminism and about feminism in general.[11]

Throughout her career, Ehrenreich has worked as a freelance writer, and she is arguably best known for her non-fiction reportage, book reviews and social commentary. Her reviews have appeared in The New York Times Book Review, The Washington Post, The Atlantic Monthly, Mother Jones, The Nation, The New Republic, the Los Angeles Times Book Review supplement, Vogue, Salon.com, TV Guide, Mirabella and American Film. Her essays, op-eds and feature articles have appeared in Harper's Magazine, The New York Times, The New York Times Magazine, Time, The Wall Street Journal, Life, Mother Jones, Ms., The Nation, The New Republic, the New Statesman, In These Times, The Progressive, Working Woman, and Z magazine.[11]

Ehrenreich has served as founder, advisor or board member to a number of organizations including the U.S. National Women's Health Network, the National Abortion Rights Action League, the National Mental Health Consumers' Self-Help Clearinghouse, the Nationwide Women's Program of the American Friends Service Committee, the Brooklyn-based Association for Union Democracy, political activist Robert Boehm's Boehm Foundation, the anti-poverty group Women's Committee of 100, the National Writers Union, The Progressive magazine's Progressive Media Project, the Fairness and Accuracy In Reporting (FAIR) advisory committee on women in the media, the National Organization for the Reform of Marijuana Laws, the Center for Popular Economics, and the Campaign for America's Future.[11]

In 2006, Ehrenreich founded United Professionals, an organization described as "a nonprofit, non-partisan membership organization for white-collar workers, regardless of profession or employment status. We reach out to all unemployed, underemployed, and anxiously employed workers — people who bought the American dream that education and credentials could lead to a secure middle class life, but now find their lives disrupted by forces beyond their control."[12]

As of 2013 Ehrenreich is an honorary co-chair of the Democratic Socialists of America. She also serves on the NORML Board of Directors, the Institute for Policy Studies Board of Trustees and the Editorial Board of The Nation. She has served on the editorial boards of Social Policy, Ms., Mother Jones, Seven Days, Lear's, The New Press, and Culturefront, and as a contributing editor to Harper's.[11]

In 1980, Ehrenreich shared the National Magazine Award for excellence in reporting with colleagues at Mother Jones magazine[13] for the cover story The Corporate Crime of the Century,[14] about "what happens after the U.S. government forces a dangerous drug, pesticide or other product off the domestic market, then the manufacturer sells that same product, frequently with the direct support of the State Department, throughout the rest of the world".[15]

In 1998 the American Humanist Association named her "Humanist of the Year".[16]

In 2000, she received the Sidney Hillman Award for journalism for the Harper's article "Nickel and Dimed", which was later published as a chapter in her book of the same title.[17]

In 2002, she won a National Magazine Award for her essay "Welcome to Cancerland: A mammogram leads to a cult of pink kitsch", which describes Ehrenreich's own experience of being diagnosed with breast cancer, and describes what she calls the "breast cancer cult", which "serves as an accomplice in global poisoning -- normalizing cancer, prettying it up, even presenting it, perversely, as a positive and enviable experience".[18][19]

In 2004, she received the Puffin/Nation Prize for Creative Citizenship,[20] awarded jointly by the Puffin Foundation of New Jersey and The Nation Institute to an American who challenges the status quo "through distinctive, courageous, imaginative, socially responsible work of significance".[21]

In 2007, she received the "Freedom from Want" Medal, awarded by the Roosevelt Institute in celebration of "those whose life's work embodies FDR's Four Freedoms".[22]

Ehrenreich has received a Ford Foundation award for humanistic perspectives on contemporary society (1982), a Guggenheim Fellowship (1987–88) and a grant for research and writing from the John D. and Catherine T. MacArthur Foundation (1995). She has received honorary degrees from Reed College, the State University of New York at Old Westbury, the College of Wooster in Ohio, John Jay College, UMass Lowell and La Trobe University in Melbourne, Australia.[14]

Ehrenreich has one brother, Ben Alexander Jr., and one sister, Diane Alexander.

When Ehrenreich was 35, according to the book Always Too Soon: Voices of Support for Those Who Have Lost Both Parents, her mother died "from a likely suicide".[23] Her father died years later from Alzheimer's disease.[23]

She has been married and divorced twice. She met her first husband, John Ehrenreich, during an anti-war activism campaign in New York City, and they married in 1966. He is a clinical psychologist,[24] and they co-wrote several books about health policy and labor issues before divorcing in 1977. In 1983, she married Gary Stevenson, a union organizer for the Teamsters.[8] She divorced Stevenson in 1993.[11]

Ehrenreich has two children. Born in 1970, her daughter Rosa was named after Rosa Parks, Rosa Luxemburg, and a great-grandmother;[10] She is a Virginia-based law professor, national security and foreign policy expert and writer.[25] Born in 1972, her son Ben is a journalist and novelist in Los Angeles.

Filling in for a vacationing Thomas Friedman as a columnist with the New York Times in 2004, Ehrenreich wrote about how, in the fight for women's reproductive rights, "it's the women who shrink from acknowledging their own abortions who really irk me", and said that she herself "had two abortions during my all-too-fertile years".[26] In her 1990 book of essays The Worst Years of Our Lives, she wrote that "the one regret I have about my own abortions is that they cost money that might otherwise have been spent on something more pleasurable, like taking the kids to movies and theme parks".[27]

Ehrenreich was diagnosed with breast cancer shortly after the release of her book Nickel and Dimed: On (Not) Getting By in America. This resulted in the award-winning article "Welcome to Cancerland", published in the November 2001 issue of Harper's Magazine. The article would go on to inspire the 2011 documentary Pink Ribbons, Inc..[28] 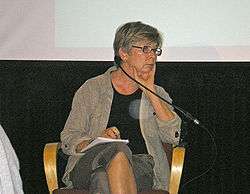