The Rockefeller University is a center for scientific research, primarily in the biological and medical sciences, providing doctoral and postdoctoral education. Rockefeller is one of the most prestigious institutes for biomedical research in the world, and it is the oldest such institute in the United States. Of a 78 person faculty (tenured and tenure-track, as of 2016), 38 are members of the National Academy of Sciences, 18 are members of the National Academy of Medicine, 8 are Lasker Award recipients, and 5 are Nobel Prize winners.

Rockefeller is located on the Upper East Side of Manhattan, between 63rd and 68th Streets along York Avenue.

Richard P. Lifton—previously the executive director of the Center for Human Genetics and Genomics at Yale University—became the university's eleventh president on September 1, 2016. 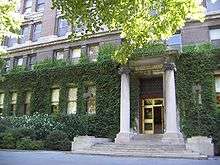 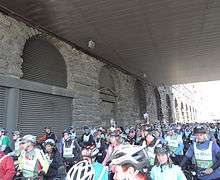 The first director of laboratories was Simon Flexner, who supervised the development of research capacity at the Institute, whose staff made major discoveries in basic research and medicine. While a student at Johns Hopkins University, Flexner had studied under the Institute's first scientific director, William H. Welch, first dean of Hopkins' medical school and known as the dean of American medicine.[3] Flexner retired in 1935 and was succeeded by Herbert Gasser.[5] He was succeeded in 1953 by Detlev Bronk, who broadened The Rockefeller Institute into a university that began awarding the PhD degree in 1954.[3] In 1965 The Rockefeller Institute's name was changed to The Rockefeller University.[3]

For its first six decades, the Institute focused on basic research to develop basic science, on applied research as biomedical engineering, and, since 1910—when The Rockefeller Hospital opened on its campus as America's first facility for clinical research—on clinical science.[6] The Rockefeller Hospital's first director Rufus Cole retired in 1937 and was succeeded by Thomas Milton Rivers.[7] As director of The Rockefeller Institute's virology laboratory, he established virology as an independent field apart from bacteriology.

In the last decade alone, Rockefeller scientists have:

Urged by Rockefeller Jr, his only son, who was enthusiastic about the Institute, Rockefeller Sr visited but once.[22] Rockefeller Jr's youngest son David would visit with his father.[23] David Rockefeller joined the board of trustees in 1940, was its chairman from 1950 to 1975, chaired the board's executive committee from 1975 to 1995, became honorary chairman and life trustee,[24] and remained active as a philanthropist.[23]

To foster an interdisciplinary atmosphere among its 79 laboratories, the university assigns a faculty member to one of six interconnecting research areas.[25][26]