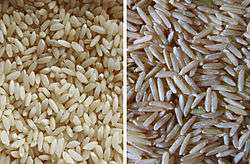 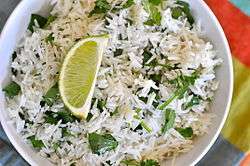 Basmati (pronounced IPA: [baːsmət̪iː] in South Asia) is a variety of long, slender-grained aromatic rice which is traditionally from the Indian subcontinent.[1] As of 2014, India exported 65 percent of the overseas basmati rice market, while Pakistan accounted for the remainder, according to the state-run Agricultural and Processed Food Products Export Development Authority. However, many countries use domestically grown basmati rice crops. [2]

"Basmati" derives from the Hindi word bāsmatī, literally meaning "fragrant"[3] (Sanskrit बासमती vasmati). Basmati rice is believed to have been cultivated in the Indian subcontinent for centuries. The earliest extant work to mention basmati rice is Heer Ranjha (1766).[4][5]

Basmati was introduced to the Middle East by Indian traders. Through cultural exchange, it remains not only an important part of various Indian/Pakistani cuisines, but now is also used extensively in Persian, Arab, and other Middle Eastern cuisines as well. India and Pakistan are the exclusive growers and exporters of this type of rice.[6]

In Pakistan, 95 percent of the basmati rice cultivation takes place in the Punjab province, where total production was 2.47 million tonnes in 2010.[8][9]

Basmati rice has a typical pandan-like (Pandanus amaryllifolius leaf) flavour caused by the aroma compound 2-acetyl-1-pyrroline.[10] Basmati grains contain about 0.09 ppm of this aromatic chemical compound naturally, a level that is about 12 times more than non-basmati rice varieties, giving basmati its distinctive spicy fragrance and flavour.[1] This natural aroma is also found in cheese, fruits and other cereals. It is a flavoring agent approved in the United States and Europe, and is used in bakery products for aroma.[11]

Scientists at Indian Agricultural Research Institute, Delhi, used conventional plant breeding to produce a hybrid semi-dwarf plant which had most of the good features of traditional basmati (grain elongation, fragrance, alkali content). This hybrid was called Pusa Basmati-1 (PB1; also called "Todal", because the flower has awns); crop yield is up to twice as high as traditional varieties. Fragrant rices that are derived from basmati stock but are not true basmati varieties include PB2 (also called sugandh-2), PB3, and RS-10.

In the United States, a variety of rice based on Basmati called Texmati is grown.[14]

In Kenya, a rice variety called Pishori or Pisori is grown in the Mwea region.[15]

Difficulty in differentiating genuine basmati from other types of rice and the significant price difference between them has led fraudulent traders to adulterate basmati rice with crossbred basmati varieties and long-grain non-basmati varieties. In Britain, the Food Standards Agency found in 2005 that about half of all basmati rice sold was adulterated with other strains of long-grain rice, prompting rice importers to sign up to a code of practice.[16] A 2010 U.K. test on rice supplied by wholesalers found 4 out of 15 samples had cheaper rice mixed with basmati, and one had no basmati at all.[17]

A PCR-based assay similar to DNA fingerprinting in humans allows adulterated and non-basmati strains to be detected, with a detection limit from 1% adulteration upwards with an error rate of ±1.5%.[18] Exporters of basmati rice use "purity certificates" based on DNA tests for their basmati rice consignments.[19] Based on this protocol, which was developed at the Centre for DNA Fingerprinting and Diagnostics, the Indian company Labindia has released kits to detect basmati adulteration.[20]

In September 1997, a Texas company, RiceTec, was granted U.S. Patent No. 5,663,484 on "basmati rice lines and grains". The patent secures lines of basmati and basmati-like rice and ways of analyzing that rice. RiceTec, owned by Prince Hans-Adam of Liechtenstein, faced international outrage over allegations of biopiracy. It had also caused a brief diplomatic crisis between India and the United States, with India threatening to take the matter to the WTO as a violation of TRIPS. Both voluntarily and due to review decisions by the United States Patent and Trademark Office, RiceTec lost or withdrew most of the claims of the patent, including, most importantly, the right to call their rice lines "basmati".[21] A more limited varietal patent was granted to RiceTec in 2001 on claims dealing with three strains of the rice developed by the company.[22]

According to the Canadian Diabetes Association, basmati rice has a "medium" glycemic index (between 56 and 69) opposed to regular white rice with a glycemic index of 89, thus making it more suitable for diabetics as compared to certain other grains and products made from white flour.[23]