Not to be confused with Biomining. 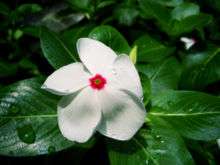 Bioprospecting is the process of discovery and commercialization of new products based on biological resources. Despite indigenous knowledge being intuitively helpful, bioprospecting has only recently begun to incorporate such knowledge in focusing screening efforts for bioactive compounds.[1] Bioprospecting may involve biopiracy, the exploitative appropriation of indigenous forms of knowledge by commercial actors, and also includes the search for previously unknown compounds in organisms that have never been used in traditional medicine before.[2]

Biopiracy describes a practice in which indigenous knowledge of nature, originating with indigenous peoples, is used by others for profit, without permission from and with little or no compensation or recognition to the indigenous people themselves.[3] For example, when bioprospectors draw on indigenous knowledge of medicinal plants which is later patented by medical companies without recognizing the fact that the knowledge is not new, or invented by the patenter, and depriving the indigenous community to the rights to commercial exploitation of the technology that they themselves had developed. Critics of this practice, such as Greenpeace,[4] claim these practices contribute to inequality between developing countries rich in biodiversity, and developed countries hosting companies that engage in 'biopiracy'.

The Maya ICBG bioprospecting controversy took place in 1999-2000, when the International Cooperative Biodiversity Group led by Ethnobiologist Dr. Brent Berlin was accused of being engaged in unethical forms of bioprospecting by several NGOs and indigenous organizations. The ICBG aimed to document the biodiversity of Chiapas, Mexico and the ethnobotanical knowledge of the indigenous Maya people - in order to ascertain whether there were possibilities of developing medical products based on any of the plants used by the indigenous groups.[5][6]

The Maya ICBG case was among the first to draw attention to the problems of distinguishing between benign forms of bioprospecting and unethical biopiracy, and to the difficulties of securing community participation and prior informed consent for would-be bioprospectors.[7]

The rosy periwinkle case dates from the 1950s. The rosy periwinkle, while native to Madagascar, had been widely introduced into other tropical countries around the world well before the discovery of vincristine. This meant that researchers could obtain local knowledge from one country and plant samples from another. The use of the plant as a cure for diabetes was the original stimulus for research. Effectiveness in the treatment of both Hodgkin's Disease and leukemia were discovered instead.[8] Different countries are reported as having acquired different beliefs about the medical properties of the plant.[9] The Hodgkin's lymphoma chemotherapeutic drug vinblastine is derivable from the rosy periwinkle.[10] 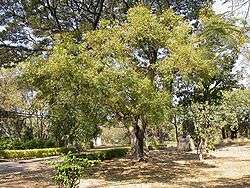 In 1994, the U.S. Department of Agriculture and WR Grace received a European patent on methods of controlling fungal infections in plants using a composition that included extracts from the neem tree (Azadirachta indica), which grows throughout India and Nepal.[11][12][13] In 2000 the patent was successfully opposed by several groups from EU and India including the EU Green Party, Vandana Shiva, and the International Federation of Organic Agriculture Movements (IFOAM) on the basis that the fungicidal activity of neem extract had long been known in Indian traditional medicine.[13] WR Grace appealed, and lost that appeal in 2005.[14]

The Enola bean is a variety of Mexican yellow bean, so called after the wife of the man who patented it in 1999.[15] The allegedly distinguishing feature of the variety is seeds of a specific shade of yellow. The patent-holder subsequently sued a large number of importers of Mexican yellow beans with the following result: "...export sales immediately dropped over 90% among importers that had been selling these beans for years, causing economic damage to more than 22,000 farmers in northern Mexico who depended on sales of this bean."[16] A lawsuit was filed on behalf of the farmers, and on April 14, 2005 the US-PTO ruled in favor of the farmers. An appeal was heard on 16 January 2008, and the patent was revoked in May 2008. An appeal to the court against the revocation was unsuccessful (Decided October 2009).[17]

In 2000, the US corporation RiceTec (a subsidiary of RiceTec AG of Liechtenstein) attempted to patent certain hybrids of basmati rice and semidwarf long-grain rice.[18] The Indian government intervened and several claims of the patent were invalidated. Meanwhile, the European Commission has agreed to protect basmati rice under its regulations pertaining to geographical indications. 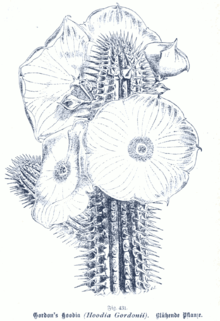 Hoodia, a succulent plant, originates from the Kalahari Desert of South Africa. For generations it has been known to the traditionally living San people as an appetite suppressant. In 1996 South Africa’s Council for Scientific and Industrial Research began working with companies, including Unilever, to develop dietary supplements based on hoodia.[19][20][21][22] Originally the San people were not scheduled to receive any benefits from the commercialization of their traditional knowledge, but in 2003 the South African San Council made an agreement with CSIR in which they would receive from 6 to 8% of the revenue from the sale of Hoodia products.[23]

In 2008 after having invested €20 million in R&D on hoodia as a potential ingredient in dietary supplements for weight loss, Unilever terminated the project because their clinical studies did not show that hoodia was safe and effective enough to bring to market.[24]

The following is a selection of some of the further cases in recent biopiracy studies. Most of them do not relate to traditional medicines.

One common misunderstanding is that pharmaceutical companies patent the plants they collect. While obtaining a patent on a naturally occurring organism as previously known or used is not possible, patents may be taken out on specific chemicals isolated or developed from plants. Often these patents are obtained with a stated and researched use of those chemicals. Generally the existence, structure and synthesis of those compounds is not a part of the indigenous medical knowledge that led researchers to analyze the plant in the first place. As a result, even if the indigenous medical knowledge is taken as prior art, that knowledge does not by itself make the active chemical compound "obvious," which is the standard applied under patent law.

In the United States, patent law can be used to protect "isolated and purified" compounds - even, in one instance, a new chemical element (see USP 3,156,523). In 1873, Louis Pasteur patented a "yeast" which was "free from disease" (patent #141072). Patents covering biological inventions have been treated similarly. In the 1980 case of Diamond v. Chakrabarty, the Supreme Court upheld a patent on a bacterium that had been genetically modified to consume petroleum, reasoning that U.S. law permits patents on "anything under the sun that is made by man." The United States Patent and Trademark Office (USPTO) has observed that "a patent on a gene covers the isolated and purified gene but does not cover the gene as it occurs in nature".[26]

Also possible under US law is patenting a cultivar, a new variety of an existing organism. The patent on the enola bean (now revoked) was an example of this sort of patent. The intellectual property laws of the US also recognize plant breeders' rights under the Plant Variety Protection Act, 7 U.S.C. §§ 2321-2582.[27]

The CBD came into force in 1993. It secured rights to control access to genetic resources for the countries in which those resources are located. One objective of the CBD is to enable lesser-developed countries to better benefit from their resources and traditional knowledge. Under the rules of the CBD, bioprospectors are required to obtain informed consent to access such resources, and must share any benefits with the biodiversity-rich country.[28] However, some critics believe that the CBD has failed to establish appropriate regulations to prevent biopiracy. Others claim that the main problem is the failure of national governments to pass appropriate laws implementing the provisions of the CBD.[29] The Nagoya Protocol to the CBD (negotiated in 2010, expected to come into force in 2014) will provide further regulations. The CBD has been ratified by all countries in the world except for Andorra, Holy See and United States. The 1994 Agreement on Trade-Related Aspects of Intellectual Property Rights (TRIPs) and the 2001 International Treaty on Plant Genetic Resources for Food and Agriculture are further relevant international agreements.

The ethical debate has sparked a new branch of international patent and trade law. Bioprospecting contracts lay down the rules, between researchers and countries, of benefit sharing and can bring royalties to lesser-developed countries. However, the fairness of these contracts has been a subject of debate. Unethical bioprospecting contracts (as distinct from ethical ones) can be viewed as a new form of biopiracy.

An extensively discussed example of a bioprospecting contract is the agreement between Merck and INBio of Costa Rica.[30]

On June 14, 2011, Colombia approved a policy for the sustainable commercial use of its biodiversity resources, primarily through the development of biotechnology research. It includes plans to set up a national company for bioprospecting to link up with the commercial sector and will be backed with US$14 million in government funds over the next four years.[31][32]

In response to concerns of biopiracy raised by research into turmeric, neem and basmati rice, the Government of India has been translating and publishing ancient manuscripts containing old remedies in electronic form, and in 2001 the Traditional Knowledge Digital Library was set up as a repository of 1200 formulations of various systems of Indian medicine, such as Ayurveda, Unani and Siddha.[25][33] The texts are being recorded from Sanskrit, Urdu, Persian and Arabic; made available to patent offices in English, German, French, Japanese and Spanish. The aim is to protect India's heritage from being exploited by foreign companies. Hundreds of yoga poses are also kept in the collection. The project has been criticized by a spokesman for the pharmaceutical industry as "a solution in search of a problem". The library has also signed agreements with leading international patent offices such as European Patent Office (EPO), United Kingdom Trademark & Patent Office (UKPTO) and the United States Patent and Trademark Office to protect traditional knowledge from biopiracy as it allows patent examiners at International Patent Offices to access TKDL databases for patent search and examination purposes.[25][34][35] The database is not available to the general public, but the articles to which it refers are (though typically in a not widely understood language such as Sanskrit). In this way the database prevents subsequent patenting without making the information to which it refers readily available for public use.