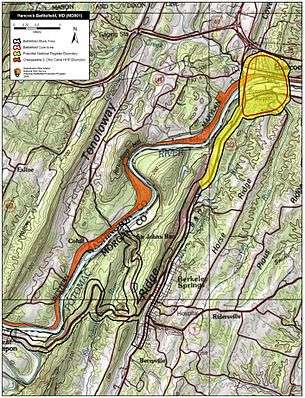 The Battle of Hancock, also called the Romney Campaign,[1] was a battle fought during the Romney Expedition, occurred January 5–6, 1862, in Washington County, Maryland, and Morgan County, West Virginia, as part of Maj. Gen. Thomas J. "Stonewall" Jackson's operations against the Baltimore and Ohio (B&O) Railroad during the American Civil War.[1]

On January 1, 1862, Confederate general Stonewall Jackson led his men from Winchester to Bath in an attempt to disturb traffic on the Baltimore and Ohio Railroad and the Chesapeake and Ohio Canal. Jackson's men reached the Potomac River opposite the garrisoned town of Hancock, Maryland on January 5, after a skirmish with Union soldiers.[1] Jackson's artillery opened fire on the town from Orrick's Hill but it resulted in only minor damage. Union garrison commander Brig. Gen. Frederick W. Lander refused to surrender to Jackson, who continued the bombardment for two days while unsuccessfully searching for a safe river crossing.[1] On January 7, the Confederate soldiers withdrew and set out for Romney, West Virginia.[1]

The historic district of Hancock retains many buildings present in 1862, including two churches damaged during the Confederate artillery barrage. The town’s street configuration is unchanged and, from the canal, a view of the Confederate hilltop artillery position can be seen.[2]