Frederick II of Prussia won a bloody battle against Austria and was now besieging Prague. Austrian Marshal Daun arrived too late to participate in the battle of Prague, but picked up 16,000 men who escaped from the battle. With this army he slowly moved to relieve Prague, forcing the Prussian forces to split.

Frederick took 32,000 of his men to intercept Daun. Daun knew that the Prussian forces were too weak to both besiege Prague and keep him away from Prague for a longer time (or to fight the Austrian army reinforced by the Prague garrison), so his Austrian forces took defensive positions on hills near Kolín. Frederick was forced to attack the Austrians. Reports of the Austrian strengths are mixed: some report 44,000 men, some reports mention 65,000 men. The battlefield of Kolín consisted of gently rolling hill slopes.

Frederick's main force turned toward the Austrians too early and attacked their defensive positions frontally instead of outflanking them. Austrian Croatian light infantry (Grenzers) played an important role in this; harassing the regular Prussian infantry under Generals von Manstein and Tresckow, they provoked them into a premature attack.

The disunited Prussian columns blundered into a series of uncoordinated attacks, each against superior numbers. By the afternoon, after about five hours of fighting, the Prussians were disoriented and Daun's troops were driving them back. 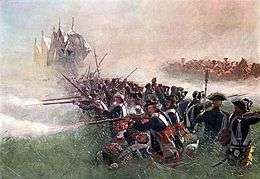 Prussian cuirassiers under Oberst von Seydlitz (promoted to major-general on that day) finally showed up. There were many charges and counter-charges on the Krzeczor Hill. The first Guard battalion under General von Tauentzien saved the Prussian army from a worse fate, covering the Prussian retreat.

Rascals, would you live forever?
— Frederick the Great, to the hesitating Guards, Battle of Kolin[1]

The battle was Frederick's first defeat in this war, and forced him to abandon his intended march on Vienna, raise his siege of Prague, and fall back on Litoměřice. The Austrians, reinforced by the 48,000 troops in Prague, followed them, 100,000 strong, and, falling on Prince August Wilhelm of Prussia, who was retreating eccentrically (for commissariat reasons) at Zittau, inflicted a severe check upon him. The king was compelled to abandon Bohemia.