In the Battle of Leuthen, fought on 5 December 1757, Frederick the Great's Prussian army used maneuver and terrain to decisively defeat a much larger Austrian army under Charles of Lorraine, thus ensuring Prussian (later German) control of Silesia during the Seven Years' War and for nearly two centuries afterward. 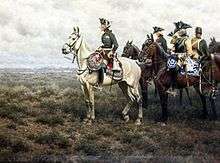 Frederick the Great and his staff at the Battle of Leuthen, by Hugo Ungewitter.

While Frederick the Great was campaigning in central Germany, defeating a combined Franco-Imperial army at the Battle of Rossbach, the Austrians had managed to slowly retake Silesia. Frederick had arrived on November 28 to find that the primary city in Silesia, Breslau (now Wrocław, Poland), had just fallen to the Austrians. He arrived near Leuthen (now Lutynia, Poland), 17 km (11 mi) west of Breslau, to find an Austrian army that was twice the size of his own. He realized that he must either win a great victory or suffer a major defeat. The commanders in charge of the Austrian army had earlier argued about whether to march out of Breslau to face Frederick, and Prince Charles of Lorraine had won the argument. The weather was foggy and the entire area had once been a training ground for the Prussian army, so Frederick the Great knew the terrain thoroughly.

Frederick marched directly toward the Austrian army with its center at Leuthen, its front stretching fully 4 miles, much larger than the average front of the time. Until the Napoleonic Wars the European armies were quite small for a number of reasons: disease; quality of food and medicine; and the levée en masse had not yet been introduced. The Austrian army was stretched out to such an extent in order to prevent it from being flanked by Frederick, as it was his favorite tactic, but this would ultimately be a key mistake. Frederick had his cavalry launch an assault on Borna as a feint and then face the Austrian right flank, appearing as though it would act as a spearhead for a right flank attack. Screening his army with his cavalry, Frederick moved his well-disciplined infantry toward the Austrian left in columns. 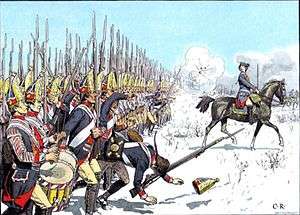 The infantry marched southward, out of sight of the Austrians, behind a line of low hills. Prince Charles Alexander of Lorraine, although in the tower of the church at Leuthen, could see nothing and responded by moving his reserve to his right flank instead of the soon-to-be imperiled left. The Prussian army had seemed to simply vanish, appearing to the Austrians as if in retreat, and Prince Charles of Lorraine was heard to say, "The good fellows are leaving, let's let them go."

But when the heads of the two superbly drilled Prussian columns – the distances between the marching platoons remaining exactly the width of each platoon's front – had passed the Austrian left flank, the columns veered left toward the enemy and continued their march until they had passed beyond the left Austrian flank. Then, on command, the platoons of the columns turned left at Lobetinz, and the whole Prussian army lay in line of battle at nearly a right angle to the left flank of the Austrian position. The whole Prussian army had carried out a maneuver to attack the Austrians in the flank. (This has been compared with the tactic used by Epaminondas against the Spartans at the Battle of Leuctra in 371 BC.)[2] The weakest soldiers of the Austrian army had been put on the left flank in a position protected by the hills, as their fighting ability was doubted. 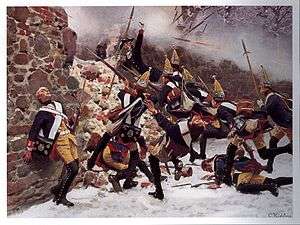 Storming of the breach by Prussian troops during the Battle of Leuthen, 1757

The Prussian infantry, arrayed in the conventional two lines of battle, then advanced and rolled up the Austrian flank. Frederick was superbly lucky that day: Not only had Prince Charles moved the cavalry from his army's left to the right, but the infantry on the left were Protestant Württembergers sympathetic to the Protestant Prussians. After firing a few half-hearted volleys, they broke ranks in front of the advancing Prussian line. The other Austrian infantry on their left, when beset with murderous 12-pounder Prussian artillery and devastating volleys from the advancing Prussians, quickly broke ranks as well.

Prince Charles rushed troops from his right to his left, forming a hastily made line along the town of Leuthen (formerly the Austrian center). The Austrians desperately attempted to realign themselves, but since their line of battle was so long, it took soldiers from the right flank an hour and a half to get into place. The determined Prussians, in 40 minutes, took the village while both armies' artillery pounded away at each other. Prussian Grenadiers stormed the church and many of the defenders were killed. Now the Austrian cavalry, seeing the exposed Prussian line, hurried to take them in the flank and win the battle. Unfortunately for the Austrians, the Prussian cavalry intercepted them with a devastating charge. The cavalry mêlée soon swirled into the Austrian line behind Leuthen, causing confusion and havoc. The Austrian line then broke.

The battle lasted a little more than three hours. After seeing his army defeated, Prince Charles of Lorraine was heard to have said "I can't believe it!" 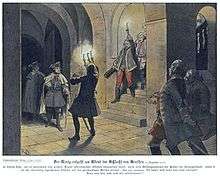 Frederick arriving at the Schloss von Lissa after the Battle of Leuthen, by Richard Knötel.

The key to victory in this battle was pre-battle operational maneuvers. Frederick the Great was able to hide his intentions, achieve surprise, and strike a massive blow on the enemy's weakest point – a tactic predictive of Bewegungskrieg (war of movement), or much later of Blitzkrieg. The Austrians fell back into Bohemia, once again leaving Silesia to the rising Prussian Kingdom. It was Frederick the Great's greatest victory, and again showed the world of the superiority of Prussian infantry at the time. Soon after, Maria Theresa demanded the resignation of Prince Charles, her double brother-in-law.