Charles was the son of Leopold Joseph, Duke of Lorraine[1] and Élisabeth Charlotte d'Orléans. When his elder brother Francis Stephen, Duke of Lorraine, married the Archduchess Maria Theresa, daughter of Emperor Charles VI, Charles Alexander entered the Imperial service in 1737.

During the War of the Austrian Succession, he was one of the principal Austrian military commanders. He was most notable for his defeats by better trained and superior forces under the formidable Frederick the Great. At the Battle of Chotusitz in 1742, his forces lost the battle but were able to inflict greater loss of life and retreat in good order. However, he lost more decisively to Frederick at the Battle of Hohenfriedberg and the Battle of Soor in 1745.[1] He was also defeated by Maurice de Saxe at the Battle of Rocoux in 1746.[1]

On 7 January 1744 he married Maria Theresa's only sister, Archduchess Maria Anna of Austria, thus making him doubly Maria Theresa's brother-in-law. The pair were jointly made Governors of the Austrian Netherlands. 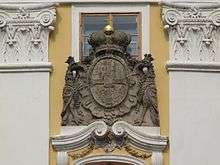 Although Maria Anna died later the same year after marriage, Charles' popularity and lack of clear replacement allowed him to continue as governor and de facto sovereign until his own death in 1780. Charles also became Grand Master of the Teutonic Order in 1761.

With events including his brother François Stephen de Lorraine (Francis I, Holy Roman Emperor) taking the throne of the Holy Roman Empire and relinquishing the duchy Lorraine, the ducal title to the somewhat ambiguously ruled Lorraine passed to France, back to Charles nominally for a brief time, and back to France temporarily in 1766—all of which was later made moot by the French Revolution of 1789.

With the loss of his co-sovereign Maria Anna, his sister Anne Charlotte, whom he was very close to, acted as a de facto co-sovereign.

Despite his record of defeats, he was able to retain his position. He was able to attain command ahead of the more popular Marshal Browne because of the support of his brother who had significant influence over military appointments. During the Seven Years' War, he commanded the army of the Roman-German Emperor at the Battle of Prague, where he was again defeated by Frederick the Great, king of Prussia, but was able to inflict heavy casualties on the superior Prussian forces. He subsequently defeated a smaller Prussian army in 1757 at the Battle of Breslau before being completely routed by Frederick the Great at the Battle of Leuthen,[1] which is considered one of Frederick's most brilliant victories. During the battle, he was commander of the Imperial Army as appointed by Maria Theresa.

After this last defeat, Charles was replaced by Count Leopold Joseph von Daun and retired from military service. He was them sent to the Netherlands as a governor. Though an unsuccessful military leader, Charles proved to be a competent administrator, well-liked by the population.[2] Under him, the Austrian Netherlands flourished, and he was deeply involved in the cultural life of his province.

Because Charles ruled by right of his marriage to Maria Anna of Austria, Maria Anna's death very shortly after marriage created a situation where his second wife Elisabeth de Vaux, mistresses, and heirs, were kept under strict privacy and not made public; indeed, his children were to present themselves only under the surnames of their mothers while in public so long as they were in the Netherlands.

Though there is obscurity about his private affairs after the death of Maria Anna, it is known that from his (private) wife Elisabeth de Vaux, Charles had a son Charles Alexandre Guillaume Joseph, and a grandson through the same; a stillborn daughter by an unnamed mistress; a son Charles Frédéric by an unnamed mistress; a son Jean Nicholas and a daughter Anne Françoise by an unnamed mistress, and an unnamed daughter through a mistress named Regine von Porthenfeld. Some of his children were known to have lived in Dutch-speaking parts of Belgium temporarily or permanently, including his first son Charles Alexandre Guillaume Joseph, who was later known to have returned to Lunéville in Lorraine, to have claimed a substantially bountiful inheritance, to have had a son Gustav Auguste in 1788, and to have died in Nancy.