This article is about the metal. For "bellmetal ore", see stannite. 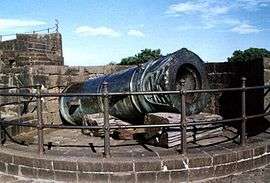 Cannon made of bell metal at Malik-e-Maidan, Bijapur.

Bell metal is a hard alloy used for making bells and related instruments, such as cymbals. It is a form of bronze, usually in approximately a 4:1 ratio of copper to tin (e.g., 78% copper, 22% tin by mass).

In India, in the state of Assam, it is called kanh while in West Bengal and Odisha, kansa, and is used for cooking and eating utensils. Sarthebari in Barpeta district of Assam holds a unique place in the production of kanh utensils. In Assam, utensils of kanh have many religious uses and the most unusual utensils, bata and banbati, are used to give offerings and puja or to show respect to honored guests and dignitaries. Belaguntha in Ganjam district, Kantilo in Nayagarh, and Balakati near Bhubaneswar are well known for this craft in Odisha.

Most commonly, and as per its colloquial name, bell metal was used for the casting of bells (see Bellfounding). Functional bells, with the intention of producing sound, are usually made by casting bell metal, a high-copper alloy of bronze, with approximately a 4:1 ratio of copper to tin (78% copper, 22% tin). Both tin and copper are relatively soft metals that will deform on striking (though tin to a lesser extent than copper), but alloying the two elements creates a metal which is harder and less ductile and also one with more elasticity than the use of just one of the metals alone.[1] This metal combination produces a tough, long-wearing material that is resistant to oxidation and subject only to an initial surface weathering. Verdigris forms a protective patina on the surface of the bell which coats it against further oxidation.[2] Bell metal of these ratios has been used for more than 3,000 years, and is known for its resonance and "attractive sound."[1] This allows for a better bell resonance and causes the bell to "vibrate like a spring when struck", a necessary quality as the clapper may strike the bell at speeds of up to 600 miles per hour. The forces holding the tin and copper together cause vibrations rather than cracks when the bell is struck which creates a resonant tone.[1] The bronze alloy C91300 is typically cited as bell bronze.

In Russia, church bells are commonly cast with a unique mixture of copper and tin, often with silver added, to produce their unique sonority and resonance, mastered early in Russian Christian history.[3]

In esoteric Buddhism (e.g., Vajrayana), bells (both hand bells and singing bells) may be cast with a special 5-Metal alloy. Each of the metals represents one of the 5 Buddhas / Wisdoms:

There is no standard proportion to the metals used in this alloy (although it is often around 75% copper and 20% tin with low proportions of the other metals). A 7-Metal alloy containing trace amounts of silver and gold (representing Absolute and Relative Truth) is also sometimes used.

Bell metal was used to cast many early Spanish, Portuguese and Malay[nb 1] cannon, most notably the Javanese cannon known erroneously as lantaka.[nb 2] In Java, bell metal mixtures including tin were used not only for the manufacture of figurines, objet d'art, sculptures and household goods for the wealthy, they were employed for the gongs, saron, demung and numerous other struck glockenspiel-like instruments of the Javanese gamelan ensemble. This material was also adopted by the Javanese influenced cultures of Thailand, Khmer and Myanmar. Bell metal is particularly prized for its excellent sonorous qualities, also found in bell metal cannons which produce a distinct, loud ring when fired.[4]

The Javanese lantaka was first cast in bell metal under an Empu of the early Majapahit Empire and spread into the surrounding islands of the Nusantara, Javanese skill in gunsmithing and cannon-founding affording military dominance over the surrounding area. Later, disaffected smiths and noble entourages emigrating from Java brought these cannon-founding skill to Philippines, Brunei, Malaysia and Myanmar.[5][6] When Ternate was captured by the Spanish, they were astounded to find over 3000 very finely cast bell metal cannon in the walled compound, although humorously to the Spaniards these were tied upright to veranda poles, used as phallic-lingam household decorations rather than weapons.[4] The Spanish and Portuguese were equally astounded to find their European bronze cannon offerings to the Javanese rejected as inferior in quality, as they rightly were.[5]

After the Dutch victories, Javanese smithed cannons of Makassar, Ternate, and the surrounding islands were taken as reparations, considered by the Dutch as made of bronze superior to their own, and subsequently melted down and recast in Dutch standard calibres and bores.[6][7]

Culturally, Javanese bronze cannons and their regional derivatives were traditionally part of a dowry, and offering a poor quality cast bronze cannon was a supreme insult. Brunei and Malaysia retain the tradition of a token cannon as dowry for weddings, and many celebrations are opened with a celebratory shot.