Holy Trinity Monastery (Russian: Свя́то-Тро́ицкий монасты́рь, Svyato-Troitsky Monastyr) is a male stavropegial[2] monastery of the Russian Orthodox Church Outside of Russia (ROCOR), located near Jordanville, New York. Founded in 1930 by two Russian immigrants, it eventually became a main spiritual center of Russian Orthodoxy in the West. The monastery is well known for its publishing work and for the attached Holy Trinity Orthodox Seminary, which has educated many clergymen in ROCOR and other Orthodox jurisdictions. Due to their closeness to the hamlet, both the monastery and seminary are often simply referred to as Jordanville.[3] The monastery is dedicated to the Holy Trinity, and its patronal feast day is Pentecost.[4] 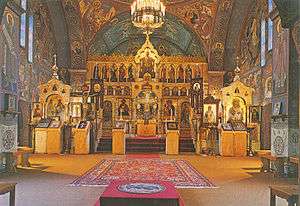 Interior of the cathedral at Holy Trinity Monastery

Hieromonk Panteleimon (Nizhnik), after spending ten years at St. Tikhon’s Orthodox Monastery near South Canaan, Pennsylvania, wanted to live a more rigorous monastic life. Moreover, after a 1926 split between ROCOR and the group which would later become the Orthodox Church in America, he wanted to stay with the Church Abroad.[5] He shared this desire with Ivan Kolos, a local choir director living at the monastery. Together they decided to find a place to live a “genuine monk’s life.”[6] They traveled to Herkimer County in Upstate New York, where they bought the Starkweather farm near Jordanville for a $25 down payment.[7] In order to pay off the mortgage, Panteleimon worked at the Sikorsky Airplane Factory in Stratford, Connecticut as a wing mechanic,[8] while Kolos remained at his parish.[6]

In the spring after Pascha in 1930, Fr. Panteleimon moved onto the property, while Ivan Kolos and another monk from St. Tikhon’s, Fr. James (Mosheruk), worked at the Sikorsky factory until the land was paid off and they could go to Jordanville.[9] Life was hard: they lived in a small building, kept a horse and cow, and instead of a stove used hot stones to cook their food.[7] In addition to performing the daily services, the brotherhood worked the land and began dairy production. With the help of a new member of the brotherhood, Hieromonk Ilya (Gavriliuk), who was a carpenter, the monks began building a large house with a chapel and room for sixteen cells, and completed it in 1935.[6]

The new monastic building was consecrated by Bishop Vitaly (Maximenko) on June 17, 1935. However, at the very end of the divine liturgy the smell of burning wood filled the air. Crying, “the church is afire!” in Russian, Vitaly and the other monks helped get the assembled worshippers to safety. The uninsured building, valued at $10,000, burnt to the ground. Sheltered in a wagon shed, the monks refused to despair and decided to build an even better structure.[10] The small brotherhood soon bought another, larger house nearby, bought another 200 acres of land, and began farming and dairy operations. They also obtained a printing press and a linotype machine and began publishing spiritual works.[9] They also interacted with the local community: a few of the monks held a concert at an Episcopalian parish in Richfield Springs,[11] and members of the nearby Baptist church visited the monastery for a service.[12]

In 1946, fourteen new monks arrived at Jordanville, headed by Bishop Seraphim (Ivanov). These included some of the future leaders of the Russian Church Abroad, including the future Metropolitan Laurus (Škurla), who was then Novice Vasily.[13] The brotherhood was originally based in the St. Job of Pochaev Monastery in Ladomirová, Czechoslovakia, which had been founded by Archbishop Vitaly when he was still an archimandrite. After a brief stay in Munich, the Brotherhood accepted the invitation of Bishop Vitaly to join the struggling Brotherhood at Jordanville, resulting in the largest Orthodox Monastery in America. The Brotherhood of St. Job brought St. Job’s printing press with them across the Atlantic, and, until the fall of the Soviet Union, Holy Trinity Monastery was the only place in the world that could typeset in Church Slavonic.

In 1944 construction began on a new monastery cathedral, with many of the bricks salvaged from a demolished factory. The cathedral was designed by Roman Verhovskoy, and the head of the building committee was Nicholas Alexander (Aleksandrov), a professor at Rhode Island State College and the future dean of the seminary.[14] The cornerstone of the church was laid in 1947,[15] and the church was completed in 1951; the Governor of New York, Thomas E. Dewey, attended the dedication. The construction of the church was greatly aided by the nearly 50 monks and lay-workers who had joined the monastery after leaving post-war Europe. Among them was Archimandrite Kiprian (Pizhov), who had with his assistant Monk Alypy (future Archbishop of Chicago) frescoed the interior of the church, covering the 700 square feet of walls with over 400 icons.[16] New monastic quarters were built from 1954–1957.[5] In addition to building up the monastery, Jordanville monks also helped set up parishes in Albany[17] and Utica.[18]

On December 3, 2011, on the feast day of the Entry of the Theotokos into the Temple, government officials came to the monastery, enjoyed food, and listened to talks held in the seminary hall, where the official ceremony making the monastery a national historic district took place.[1] The district includes 41 contributing buildings, 3 contributing sites, 2 contributing structures, and 3 contributing objects.[19] 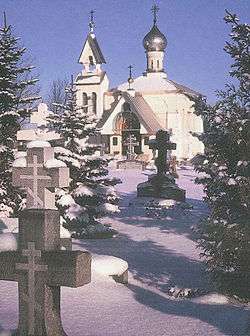 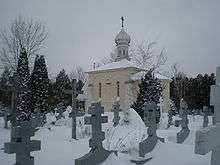 The monastery maintains several cemeteries on its property, which collectively make up one of the largest Eastern Orthodox cemeteries in the United States. The monastery regularly prays for everyone buried in the cemetery at the divine liturgy and panikhida services.[20] Moreover, many renowned hierarchs and notable individuals in ROCOR’s history are buried at Jordanville. In a crypt at the east end of the monastery cathedral are buried, among others, Metropolitans Laurus (Škurla) and Philaret (Voznesensky), Archbishop Averky (Taushev), and Archimandrite Cyprian (Pyzhov), the renowned icon painter.

"Holy Trinity Icon Mounting Studio has for many years been producing high quality print icons painted by the Fathers of Holy Trinity Monastery as well as other iconographers."[21]

The roots of the monastery’s strong publishing division can be traced to the Pochayiv Lavra in modern-day Ukraine. There, Archimandrite Vitaly (Maximenko) had run the printing press, which included 150 monastic workers and 8 printing presses. With the outbreak of World War I and the Russian Revolution publishing operations came to a halt. Archimandrite Vitaly escaped to Ladomirová, Czechoslovakia, where he founded a new monastic brotherhood, the Brotherhood of St. Job of Pochaev, to continue the work of the Lavra. This new brotherhood, under the authority of ROCOR, began publishing many new publications, including the periodicals Pravoslavnaia Rus, Pravoslavnyi Put, and the Pravoslavnyi Kalendar, which contains the rubrics for all the Sundays and major feasts of the church calendar. All three of these publications are still being published by Holy Trinity Monastery. By 1934, the brotherhood was publishing three-quarters of all ROCOR publications, which were being read in 45 countries. However, with the advance of the Soviet Army in 1944, the brotherhood fled Czechoslovakia. Half the brotherhood, under the leadership of Archimandrite Seraphim (Ivanov), emigrated to the United States, where they joined the Jordanville brotherhood, which had already been printing books on a small scale.[22]

At Jordanville, the Brotherhood of St. Job of Pochaev began publishing on the same level as they had in Czechoslovakia. In addition to Orthodox periodicals, they published service books, multi-volume editions of the lives of the saints, and many other religious works. Publishing became one of the major sources of income for the monastery. During the Cold War, the monastery was the largest publisher of Russian religious literature outside of the Soviet Union, and according to the monastery’s publication website many behind the Iron Curtain remembered Jordanville as being practically their only source of Orthodox books.[23] To supplement in-house printing, the monastery also outsourced some titles to be published in New York and Japan.[24]

The monastery has now stopped all in-house printing due to costs and is outsourcing all publishing to outside printers. However, it is still continuing to translate, edit, and publish new works in both print and digital formats. According to the publications website, the monastery hopes to publish four to eight new titles a year. Recent titles include the Psalter for Prayer, a new translation of the Psalter from Church Slavonic, stylistically based on Myles Coverdale’s translation of the psalms in the Book of Common Prayer.[25]

In addition to publishing work, the monastery also operates a bookstore which began operation in 1990 with the expansion of the monastery building. It sells (both in-store and online) both monastery publications and books and other media from Orthodox suppliers from around the world.[26]