Saint Bernard of Menthon, C.R.S.A., (or Bernard of Montjoux) was the founder of the famed hostel which has served travelers for nearly a millennium and of the congregation of canons regular which has served it throughout that history. It has given rise to the famous breed of dogs named for that hostel.

Bernard was born about 1020,[1] probably in the Château de Menthon, near Annecy, then in the County of Savoy, a part of the Kingdom of Arles. He was descended from a rich and noble family and received a thorough education. When he had reached adulthood, he decided to devote himself to the service of the Church and refused an honorable marriage proposed by his father. In popular legend it is said that he had to sneak out of the castle on the night before an arranged wedding, and that during his flight from the castle, he threw himself from his window, only to be captured by angels and lowered gently to the ground 40 feet (12 meters) below.

Placing himself under the direction of Peter, the Archdeacon of Aosta, under whose guidance he rapidly progressed, Bernard was ordained a priest. Later, on account of his learning and virtue, he was appointed to succeed his mentor as archdeacon of the cathedral, giving him the charge of the government of the diocese, directly under the bishop.[2]

Seeing the old pagan ways still prevailing among the people of the Alps, Bernard resolved to devote himself to their conversion. For 42 years he continued to preach the Gospel to these people and even into many cantons of Lombardy, effecting numerous conversions and working many miracles.[2] 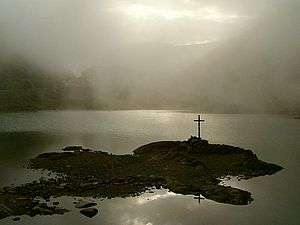 For another reason, however, Bernard's name will forever be famous in history. Since the most ancient times there has been a path across the Pennine Alps leading from the Aosta Valley to the Swiss canton of Valais. The traditional route of this pass is covered with perpetual snow from seven to eight feet deep, and drifts sometimes accumulate to the height of forty feet. Although the pass was extremely dangerous, especially in the springtime on account of avalanches, it was often used by French and German pilgrims on their way to Rome.[2]

In his office as archdeacon, Bernard had the charge of caring for the poor and travelers. For their convenience and protection, Bernard founded a canonry and hostel at the highest point of the pass, 8,000 feet above sea-level, in the year 1050, at the site which has come to bear his name. A few years later he established another hostel on the Little St. Bernard Pass, a mountain saddle in the Graian Alps, 7,076 feet above sea-level. Both were placed in charge of communities of canons regular, after papal approval had been obtained by Bernard during a visit to Rome. The new community was placed under the patronage of St. Nicholas of Myra, patron saint of travelers.[1]

The last act of St. Bernard's life was the reconciliation of two noblemen whose strife threatened a fatal outcome. He died in June 1081 in the Imperial Free City of Novara and was interred in the monastery of St. Lawrence.[1] 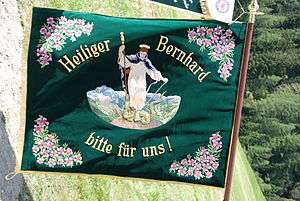 Saint Bernard on the flag of the Tyrolean Alpine Guard, detachment Villgraten valley

These hostels were renowned for the generous hospitality extended to all travelers over the Great and Little St. Bernard, so called in honor of the founder of these charitable institutions. At all seasons of the year, but especially during heavy snow-storms, the canons, later accompanied by their well-trained dogs, the common herding dogs of the Valais ("St Bernards" are attested from the 17th century), went out in search of victims who might have succumbed to the severity of the weather. They offered food, clothing, and shelter to the unfortunate travelers and took care of the dead. They depended on gifts and collections for sustenance.

As of 2012 the congregation consisted of about 35 professed members, the majority of whom live at the hostel while some provide pastoral care to neighboring parishes.[1] St. Bernard dogs are still on the site as pets; helicopters are used in rescue operations today.[3]

Although venerated from the 12th century in such places of northern Italy as Aosta, Novara and Brescia, Bernard was not formally recognized as a saint until his canonization by Pope Innocent XI in 1681. His feast is celebrated on 28 May.[4] Pope Pius XI confirmed Bernard as the patron saint of the Alps in 1923. His image appears in the flag of some detachments of the Tyrolean Alpine Guard. He is also the patron saint of skiing, snowboarding, hiking, backpacking, mountaineering.[3]