Not to be confused with Pennines.

The Pennine Alps (German: Walliser Alpen, French: Alpes Pennines, Italian: Alpi Pennine), also known as the Valais Alps, and formerly called Alpes Poeninae, are a mountain range in the western part of the Alps. They are located in Switzerland (Valais) and Italy (Piedmont and the Aosta Valley).

The main chain (watershed between the Mediterranean Sea and Adriatic Sea) runs from west to east on the border between Italy (south) and Switzerland (north). From Mont Vélan, the first high summit east of St Bernard Pass, the chain rarely goes below 3000 metres and contains many four-thousanders such as Matterhorn or Monte Rosa. The valleys are quite similar on both side of the border, being generally oriented perpendicular to the main chain and descending progressively into the Rhône Valley on the north and the Aosta Valley on the south. Unlike many other mountain ranges, the higher peaks are often located outside the main chain and found themselves between the northern valleys (Grand Combin, Weisshorn, Mischabel, Weissmies).

The chief peaks of the Pennine Alps are: 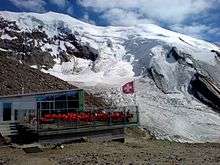 The chief passes of the Pennine Alps are: