For other uses, see Bexley (disambiguation). 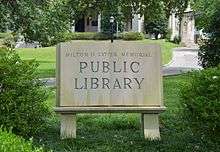 Bexley is an area of south-east London, England and part of the London Borough of Bexley. It is located 13 miles (21 km) east-southeast of Charing Cross. It was an ancient parish in the county of Kent. As part of the suburban growth of London in the 20th century, Bexley increased in population, becoming a municipal borough in 1935 and has formed part of Greater London since 1965.

Bexley was an ancient parish of Kent, in the Diocese of Rochester, and under the Local Government Act 1894 formed part of Bexley Urban District. The urban district gained further status in 1935 as a municipal borough. Kent County Council formed the second tier of local government during that time. In 1965, London County Council was abolished and replaced by Greater London Council, with an expanded administrative area that took in the metropolitan parts of the Home Counties. Bexley Municipal Borough, Erith Municipal Borough, Crayford Urban District Council and Chislehurst & Sidcup Urban District Council were merged (less areas of Chislehurst and Sidcup that became part of the new London Borough of Bromley) into a new London Borough of Bexley. 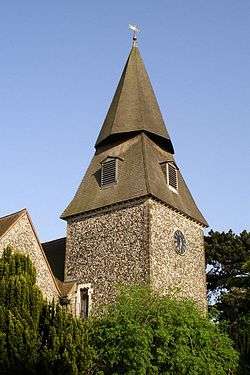 The main landmark in Bexley is the Anglican St. Mary's Church which gives its name to the London Borough of Bexley electoral ward containing the village. The church's most distinctive feature is probably the unusual spire which resembles an octagonal cone balanced precariously on top of a truncated pyramid.

Hall Place is a former stately home, beside the River Cray on the Bourne Road out of Bexley towards Crayford. It lies to the north of Bexley at the foot of the road (Gravel Hill) up onto Bexley Heath (now covered in the modern day town of Bexleyheath). The house is unusual in that its two halves are built in highly contrasting architectural styles with little attempt at harmonizing them. [1] The house and grounds are now owned by the London Borough of Bexley, and are open to the public. The gardens include a topiary display of traditional heraldic figures. Three walking routes pass Hall Place, the local council-sponsored Shuttle River Way and Cray River Way and the Mayor of London's "London LOOP" walk, which, shortly after its start at Erith, follows the Cray River Way from Crayford to Foots Cray.

Danson House and the surrounding Danson Park in Welling are two of the main popular attractions in the London Borough of Bexley. One of London's finest architectural families in the 19th century came from Bexley: the Shaws. John Shaw (1776–1832) worked on Lamorbey Park and was a well known architect in Kent and London, being one of the first designers of semi-detached housing in the capital. He is buried at St. Mary's Church; his son, John Shaw Jr, lived in nearby Crayford for a short time and owned a villa which was demolished in the early 20th century.

Red House the only house commissioned, created and lived in by William Morris, founder of the Arts and Crafts movement, Red House is a building of extraordinary architectural and social significance. When it was completed in 1860, it was described by Edward Burne-Jones as 'the beautifullest place on earth'. The house has been acquired by the National Trust and is open to the public, the house is not fully furnished, but the original features and furniture by Morris and Philip Webb, stained glass and paintings by Burne-Jones, the bold architecture and a garden designed to 'clothe the house are still available to view.

Bexley station serves the area with services to London Charing Cross, London Cannon Street as part of a loop services both via Sidcup and via Woolwich Arsenal, and to Gravesend. Bexley is served by several Transport for London bus services connecting it with areas including Abbey Wood, Bexleyheath, Bromley, Crayford, Chislehurst, Dartford, Eltham, Erith, North Greenwich, Sidcup and Thamesmead.